Nature has an amazing way of adapting to change. Consider cattle or deer with multichambered stomachs to assist with breaking down tough plant matter, or the ability of bears and other animals to hibernate up to 100 days without eating or drinking to survive the food-lean winter months. These animals had to adapt to their environments or perish.

Similarly, roof coatings formulators live in a seemingly ever-changing regulatory landscape that tests the abilities of manufacturers to recreate and often reinvent products to meet regulations, forcing them to adapt to change, slowly move to other offerings or go out of business.

Coating manufacturers that have been successful with creating products that meet volatile organic compound (VOC) limits and other regulatory requirements while maintaining the properties that make their products useful realize environmental pressures will persist, and they will again be expected to reduce base VOC levels in their products. It is not a question of if but when.

A coating formula can be viewed as a series of "blocks," each of which contribute to coating a property or series of properties before and/or after application. The blocks can represent mass per 100 gallons of finished product and be measured by volume at the formulator's discretion. The goal is to fill the blocks with what is needed so the coating achieves its intended properties. The ratios of these blocks to each other, as well as the blocks' composition themselves, will determine everything about the coating—from its stability in the can to its final properties years after application.

For example, the additives block can contain in-can stabilizers that prevent fungal and/or microbial growth while the coating is being stored in its container. The binder block contains a film former that will comprise the backbone of the cured or dried coating, while the solvent block helps carry the resin binder and gives the resin ample time to associate, cure or dry into a solid covering. 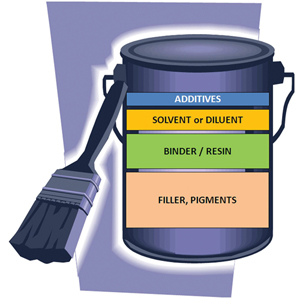 A simplified breakdown of a paint formulation consisting of blocks of differing sizes, each contributing to the overall in-can application and final coating properties

Changing the size of any of these blocks will change one or more physical properties. Take away or change the solvent type and the drying time will speed up or slow down depending on the evaporation rate of the solvent if the resin, fillers and additives are compatible with the new solvent. Increase the calcium carbonate's (filler's) volume, and the coating will thicken and become less expensive, yet may become brittle because the additional filler is competing with other components for space.

Further still, changing the ratios of components within the blocks can change not only short-term but also long-term properties. For example, if you were to take a polyurethane coating and change the ratio of a polyether/polyester blend to be more heavily polyester-based without changing the overall binder block contribution (that is, the block size), you would yield a film with relatively poor moisture resistance and lower temperature performance but with great abrasion resistance, among other qualities.

The challenge for a coating formulator is determining the right balance of properties (the blocks) to yield a proper dry time, surface gloss, rheology, adhesive strength, weatherability, tensile and tear strength, and elasticity—the list goes on—while also addressing the ever-present federal and state environmental regulations that are in place to minimize the effect coatings have on the environment from "cradle to grave."

Coating regulations govern how much and what kind of raw material can be used in a coating, whether the coating can be manufactured and sold in a given state or locality, or to which types of customers it can be sold. Regulations also dictate whether a manufacturer is able to transport a coating from one point to another, how the coating is to be properly packaged for the journey, how it is to be stored and used to minimize safety issues to the applicator and bystanders, and even how much of it is permitted and where it is to be disposed.

The regulations that most affect roof coating formulations are the rules that govern the permissible volume of VOCs.

A change in landscape

The Air Pollution Control Act of 1955 and Clean Air Act of 1963 paved the way for current national air-quality standards and were passed in response to fatal pollution incidents, such as the "killer fogs" in London and thick smog in manufacturing towns such as Donora, Pa. These federal acts established funding for the study and cleanup of air pollution, but there was no federal program to address air pollution until the passing of the Clean Air Act of 1970, the same year the Environmental Protection Agency (EPA) was created. Since then, the EPA has been responsible for a variety of Clean Air Act programs to reduce air pollution nationwide.

One approach was to reduce ground-level ozone via the EPA's National Ambient Air Quality Standards (NAAQS) for ozone, designating certain "nonattainment" areas throughout the U.S. To reach compliance, states and regions in nonattainment areas were required to introduce regulations to reduce emissions of nitrogen and VOCs to lower their ozone levels to the EPA's acceptable thresholds. It was not long thereafter when solvents used in common roof coatings were affected by these regulations on national and state levels in the form of VOC-content limits for certain product types.

Stepping up to the challenge

As more pressure was brought by federal and state regulations and environmental groups to reduce VOCs in coatings, formulators worked to create suitable coatings using water or solvents deemed "exempt;" that is, solvents that do not significantly contribute to ozone depletion and, therefore, do not count toward VOC limits in formulations.

But as previously discussed, changing the solvent block has effects on other formula components. Often, the odor is noticeably more detectable. A common misunderstanding is "low VOC" implies "low odor," which is not necessarily true, or resin compatibility is affected (either positively or negatively) when a new solvent is used. This, in turn, alters the film properties or the solvent itself flashes more slowly than with a more traditional solvent, affecting film formation and the coating's final properties, which may not manifest for years after application.

Of the major regional air management districts in the U.S., California's South Coast Air Quality Management District (SCAQMD), which includes Orange County, nondesert regions of Los Angeles County, as well as urban portions of San Bernadino and Riverside counties, is the most watched district by roof coating manufacturers. The regulations that come from this district serve as a barometer for future regulations enforced by the rest of the U.S: If SCAQMD passes a VOC-reduction amendment, there is a good chance the regulation will influence future rules across the U.S.

Beginning in 1977 with the passage of Rule 1113, "Architectural Coatings," SCAQMD began regulating architectural coatings. Since that time, SCAQMD has amended regulations 27 times. The amendments have included solvent restrictions and reduced coating VOC limits. Even as recently as January 2014, amendments have included restrictions to VOCs in colorants added at the point of sale. Rule 1113 currently is being reopened by SCAQMD. As a result, further VOC emission reductions are expected.

Other state regulatory bodies tend to follow SCAQMD. For example, the California Air Resources Board (CARB), the only state-level environmental regulatory agency, has used SCAQMD's rules as the basis for its Suggested Control Measures (SCM). In 2002, the Ozone Transport Commission (OTC), which comprises 13 states in northeast U.S., adopted a Phase I "model rule" for architectural and industrial maintenance (AIM) coatings that introduced VOC restrictions similar to those found in CARB's 2000 SCM.

Although the OTC does not have authority to regulate products within their member states, the model rules generated by the OTC serve as a recommendation that the states ultimately decide whether to adopt, at which point the regulations could be introduced as written in the model rule, adopted as amended, or look completely different than the OTC's model rule. 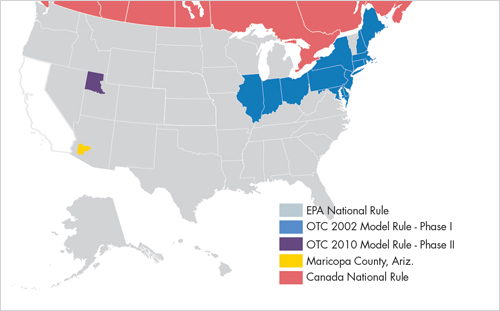 A map of the regulatory bodies that affect, and in some cases direct, VOC regulations for architectural and industrial maintenance coatings. States not shaded follow EPA VOC regulations.

A more restrictive "Phase II" OTC model rule version based on CARB's 2007 SCM was introduced with a suggested Jan. 1, 2014, compliance date, but at press time it has not been adopted in any of the OTC states. Only Utah (specifically the Salt Lake City area and ironically not an OTC state) has adopted OTC's Phase II model rule with a compliance date of Jan. 1, 2015. Once the rule goes into effect, this control area will have the tightest AIM coating VOC-content restrictions in the U.S. outside of California.

The future of roof coatings

Because environmental regulations are expected to be even more restrictive as the years progress, coating manufacturers must adapt or perish—it is that simple. Pressure will continue from the EPA and local districts such as SCAQMD, and more states will try to reduce VOCs in an effort to achieve compliance with the EPA's NAAQS for ozone.

At press time, the EPA is slated to propose a new NAAQS for ozone that may lead to new widespread VOC regulations across the U.S. and in areas where VOC regulations typically have not been introduced. Should a reduced ozone standard be adopted, formulators and contractors alike will need to be conscious of the rules in place to ensure products comply with local regulations and application practices follow the rules.

Vigilant coating formulators should be up to the challenge, and it is to their advantage to be proactive at the design stages of their research to anticipate these regulatory changes, using some ingenuity and common sense to meet VOC and other formulary requirements.

The answers to these questions will save much trouble later when new rules and regulations are proposed or adopted.


For an article related to this topic, see:
"Everything old is new again," August 2013 issue