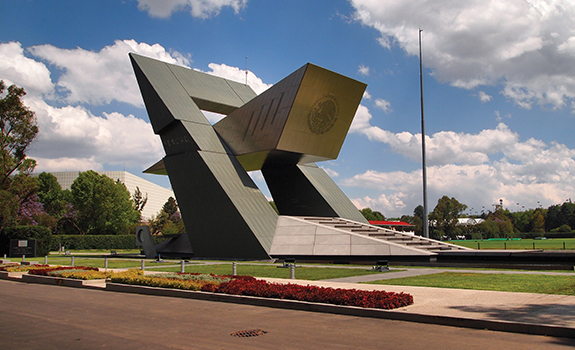 Designed by architect Agustín Hernández Navarro, the monument integrates elements symbolizing the strength and work of Mexico's armed forces during the past 100 years and represents the architect's impression of a military cannon. The striking abstract shape incorporates multiple planes, slopes and sharp angles.

About 11,033-square-feet of RHEINZINK® prePATINA Reveal Panels installed by Ypasa, Mexico City, clad the monument's major vertical structure and are complemented with stainless-steel panels on the adjoining element. The monument is located along Paseo de la Reforma and expected to attract tourists.

To submit a photo to Close-up, email professionalroofing@professionalroofing.net or mail a photo to Professional Roofing, Attn.: Close-up, 10255 W. Higgins Road, Suite 600, Rosemont, IL 60018. Submittals should include a photo, as well as a description about the photo. A $100 gift card will be awarded for the photo chosen to be featured in Close-up.