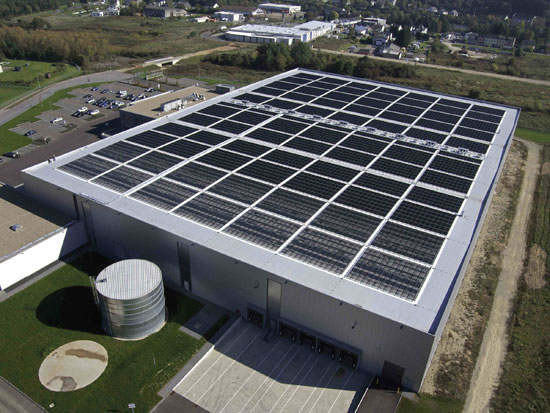 Munich-based alwitra GmbH & Co.'s installation of a Solyndra® photovoltaic (PV) system on a Parts Europe warehouse in Konz, Germany, is the second-largest Solyndra PV system installation in the world. In fact, Germany has established itself as a leader when it comes to producing and installing PV technology, according to www.thebreakthrough.org.

As of 2009, 15 of the 50 largest solar power plants in the world were in Germany. Solar power currently meets about 1.1 percent of Germany's electricity demand; some market analysts expect that number to reach 25 percent by 2050.

During the 1970s, high energy prices hit Germany and energy security became a concern. Germany focused more on the environment during the next two decades as pollution increased and the Chernobyl nuclear disaster occurred.

In 1991, Germany's government passed the 1,000 Roofs program, which involved the government giving subsidies to individuals to cover the cost of installing a PV roof system. The program aimed to gain experience with PV system installations, make new housing compatible with renewable energy options and get more consumers to use PV technology. By the mid-1990s, 2,000 grid-connected PV roof systems had been installed in Germany.

The 1,000 Roofs program expanded to become the 100,000 Roofs program, which aimed to drive down the prices of PV system installations. Private entities were invited to participate and given loans of 6,230 euros per kilowatt for PV systems with an output less than 5 megawatts and 3,115 euros per kilowatt if the output was higher. By the time the program ended in 2004, 100,000 grid-connected PV roof systems had been installed and Germany's PV industry had become capable of mass manufacture.

In 1998, Germany's Green Party won enough votes to form a coalition with the Social Democratic Party and gain control of parliament. The country committed to a 21 percent reduction in emissions from 1990 levels by 2012.

These events led to extensive government investment in renewable energy, especially PV technology. Germany's government established a feed-in tariff, which guarantees a higher-than-market price for electricity generated by PV systems, which is fixed for 20 years beyond the installation date, providing investment certainty for firms and individuals. The feed-in tariff rates were increased in 2000 but coupled with a 5 percent decrease each year in reimbursement for newly installed PV systems.

Strategic investment in PV technology has led Germany to become a global leader in PV system installation and manufacturing. German firms make up 46 percent of the global market, and more than 10,000 jobs have been generated for the German work force.