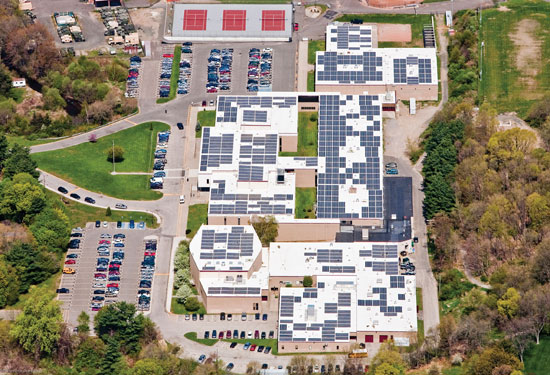 The company faced various challenges during the project, including 24 different roof areas, many with different deck types—such as metal, gypsum and concrete—and elevations; an existing EPDM roof system covering an older built-up roof (BUR) system, which contained asbestos materials; and a strict deadline because work had to be performed while faculty and students were on summer vacation.

Silktown Roofing removed a layer of EPDM and insulation, abated the asbestos-containing BUR layer and installed the Sika Sarnafil G410 EnergySmart Roof membrane. Groups of 12 thin, lightweight, flexible solar modules were laminated onto sections of the membrane to form 10- by 40-foot flexible solar roof panels, which were hot-air welded to the installed membrane and wired to the building's electrical system.

The company also faced the challenge of laying out and installing the solar panels' electrical conduits in the insulation.

"The conduits were in a rainbow pattern of curves, so we had to do a lot of cutting and fitting," says Jorge Orfao, project manager and estimator for Silktown Roofing. "However, we quickly got the hang of that, and once I saw how everything fit together, it was quite impressive."

A problem emerged when Silktown Roofing began performing work on the 35-foot-high auditorium roof system, which was reroofed last because it did not contain asbestos and the band had been using that part of the school. When the company removed the existing 11,000-square-foot roof system, it discovered the gypsum deck below had absorbed a lot of water, making it unsafe to walk on and requiring replacement.

"It is to Silktown Roofing's credit that everything was completed in time for the opening of the school," says Richard Kirby, associate architect and roofing consultant for Kaestle Boos Associates, New Britain, Conn., the architect for the project. "I commend them on their flexibility and ability to face obstacles and remain under deadline."