Everything old is new again

"Don't throw the past away; you might need it some rainy day; dreams can come true again; when everything old is new again."

These lyrics from the Peter Allen hit song, "Everything Old is New Again," made famous by the 1979 hit film "All That Jazz," could be the official theme song of the roof coatings industry. 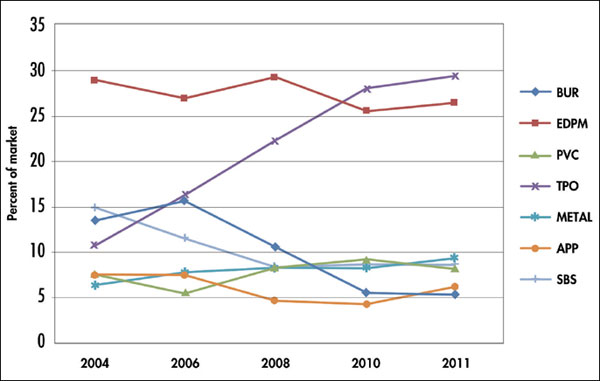 Although roof coatings and restoration products have been part of the roofing industry for decades, their formulations and use have continued to evolve, making "old" systems new again.

Driven by the availability of asphalt as the result of growing demand for gasoline, asphalt coatings hit the scene during the late 19th century. Asphalt coatings were simple solutions of refinery asphalt and petroleum solvents and were used to paint a variety of surfaces. As time passed, more advanced formulations were employed that included fibers and fillers. This allowed products to be used in vertical applications to build a variety of film thicknesses and improve durability.

The popularity of asphalt roofing grew during the early 20th century along with coal-tar pitch. The combination of "rag felts," multiply construction and durable bitumen began to dominate the commercial roofing market. But the environment and time are the enemies of everything, including roofing. As bitumen-based roofing materials invariably aged, manufacturers and formulators worked to develop products to extend their lives.

The next substantial development occurred when aluminum paints and coatings entered the market. During the 1920s, aluminum powder became commercially available, and manufacturers recognized metallic pigmented paints could protect surfacing from environmental effects. Leafing aluminum allowed reflective pigments to be in solvent-based asphaltic coatings; the leafing aluminum would "precipitate" to the coating's surface film and provide a reflective surface for the roof system below. This kept roofs cooler and promoted a longer-lasting solution. The aluminum coating could be applied in multiple subsequent applications throughout a roof system's life.

The early 1970s saw the introduction of the first acrylic-based white elastomeric roof coatings in the United Kingdom. The acrylic technology provided a durable, flexible film that typically was pigmented with titanium dioxide to provide a reflective, "cool" surface. Subsequent years saw other polymer chemistries that provided differing backbones for roof coatings, including silicone-, urea-, urethane-, thermoplastic elastomer- and polyvinyldiene fluoride-based solutions. Each has unique advantages, functions and substrate compatibility.

Pressure along the way

Roof coating innovation has been driven by market demand and regulatory and environmental pressure. Two significant findings reduced market availability of coal-tar pitch and asbestos. In 1985, the World Health Organization recognized a cancer hazard related to coal-tar exposure during high-temperature applications. As a result, use of coal-tar pitch has been greatly reduced during the past 30 years. In 1989, the Environmental Protection Agency (EPA) banned the use of any new product formulated with asbestos, which commonly was used to provide body to roof coatings and mastics. The roof coatings industry made wholesale changes to formulations and eliminated asbestos.

And during the past 20 years, there has been additional pressure by environmental groups to reduce the level of volatile organic compounds (VOCs) in industrial products. EPA has determined VOCs found in paints, coatings and aerosols can deplete the ozone layer. As a result, EPA and other state and local agencies have worked to reduce the level of VOCs found in a variety of product categories. VOC-containing solvents served as an efficient diluent in many roof coatings and mastics.

Formulators were challenged with creating workable products that had reduced levels of VOC or used non-VOC containing solvents or water as diluent. But by reducing or changing the solvent used in adhesive and coatings, the products in many cases become higher in viscosity, or thickness. So the new formulations can present changes and application difficulties.

The expectation is these pressures will persist and all industries will be forced to continue to reduce the base level of VOC in their products.

Oil prices also affected coating formulation. As gasoline pricing increased, refiners sought methods to yield more gasoline out of each oil barrel. With refineries running "leaner," less asphalt was produced, and the asphalt produced had a composition that was of lesser quality to manufacture roof coatings, making supply and formulation even trickier.

The industry found solutions for new substrates and reformulated coatings to meet restrictions. In some cases, coatings became more expensive or specialty additives were employed to accommodate for the shortcomings in the new asphalt.

It now is a widely accepted fact that in many instances, a reflective roof surface can reduce a facility's energy usage. The coatings industry recognized this and realized existing lower-reflective roofs could be upgraded with coatings to achieve desired results.

In 1998, EPA began recognizing the energy benefit of reflective surfaces. That same year, the Cool Roof Rating Council (CRRC) was formed. CRRC was empowered by the California Energy Commission to create methods by which roof surfacing can be qualified for reflectance (the ability of a product to reflect the visible portion of light) and emissivity (the property of a product to reflect infrared light). CRRC developed testing and aging protocols and designed and created a clearinghouse for the established data.

Empowered with data, code authorities began adopting reflective standards, and organizations such as the U.S. Green Building Council began recommending the use of reflective surfaces.

These changes had a twofold effect on the roof coatings industry: White reflective coatings became a popular solution, and reflective and aluminum coatings experienced a slight decrease in market appeal. Many standards required reflective values in excess of those achievable by aluminum-pigmented products, which must use titanium dioxide as a pigmented white solution.

Another aspect of the reflectivity trend was a massive swing in the roofing market from traditional asphaltic-based solutions to thermoplastic products such as TPO. The result was the products traditionally used to protect asphaltic-based roofing materials may not be as effective when used with TPO systems. New players entered the market, and existing roof coating manufacturers developed alternative formulas to work with the TPO trend.

Roof coating market share decreased as new TPO solutions were more frequently installed, and the new installations did not typically require an application of coating to achieve the "required" reflectance. But roof coating manufacturers formulated products for TPOs with the expectation that consumers will be interested in extending the lives of these systems.

Looking forward, the situation likely will not change for the roof coatings industry. Pressure will continue from EPA and local authorities regarding VOC usage as more states try to reduce greenhouse gas emissions. The market appeal of reflective thermoplastics likely will continue as the environmental community attempts to address energy consumption (correctly or incorrectly). New findings by the International Agency for Research on Cancer with regard to the hazardous nature of oxidized asphalt used in roofing may drive more consumers away from traditional bitumen blends. All this will create additional challenges.

Joseph W. Mellott is director of business development for The Garland Co. Inc., Cleveland, a member of the Roof Coatings Manufacturers Association.