It wasn't long ago roof membranes had one function—to keep the elements out of buildings. As time has passed, technologies have evolved and societal needs have changed. Now, these same roof membranes are called upon to do more. Some roofs have become "green"; many roofs have become white. And any roof that is not yet green or white will probably go the way of the Dodo bird with time and new government regulations.

If you haven't noticed, society and the roofing industry are focusing on environmental friendliness and energy consciousness, which poses a question: Does the roofing industry need a new class of product to meet the coming demands of society and, ultimately, our clients? The answer, so far, has been no. The manufacturing side of the industry has responded by adapting long-standing products to meet this new demand.

There are several methods for measuring reflectivity. One of the more common methods is ASTM C1549-09, "Standard Test Method for Determination of Solar Reflectance Near Ambient Temperature Using a Portable Solar Reflectometer." This method uses a Solar Spectrum Reflectometer (SSR) manufactured by Devices and Services Co., Dallas. The device simulates incoming solar radiation inside a closed chamber. Light is reflected off the target, such as a roof membrane, toward a series of sensors. The device calculates the reflectivity based on the amount of energy reflected inside the chamber. The SSR contains the radiation source for the measurements, and it can be used in full sun, under cloudy skies or nighttime.

For standardization purposes, a roof membrane's reflectivity is measured at two points in time using a method such as ASTM C1549-09.

The first point in time is the new, or "as is," manufactured condition.

The second point in time is after three years of aging. Aging typically is done according to a prescribed aging process specified in the American National Standards Institute's (ANSI's) and Cool Roof Rating Council®'s (CRRC's) ANSI/CRRC-1 Standard. ANSI/CRRC-1 requires a manufacturer's samples to be placed outside on racks in three climates within the U.S.; measure 24 square inches or larger; and be mounted at a 1:12 slope. Then, after three years of exposure, the reflectivity is measured again.

The two numbers that indicate the new and aged three-year measurements typically are found on a manufacturer's data sheet for reflectivity. This prescribed aging process for membranes is generally well thought-out and impartial. However, these small test samples simply cannot capture all the debilitating conditions faced by a functioning roof such as installation differences, foot traffic, drainage patterns and rooftop unit exhaust. Only field data can capture these conditions.

Although highly reflective polymer-modified bitumen roof systems are used in most, if not all, climates in the U.S., MRCA's Technology and Research Committee elected to conduct its research in Texas. Several MRCA and NRCA member contractors from Texas had notified the committee they had installed a significant amount of highly reflective polymer-modified bitumen roof systems in their markets. Therefore, the study would have a good population of roofs to study.

Twenty-eight roof systems varying from several months to more than five years of age were measured. These roofs were in the Austin and Dallas metropolitan areas and were installed by three contractors. The readings were collected in May 2012 and June 2012. The reflectivity measurements were conducted using an SSR with version 5 firmware. 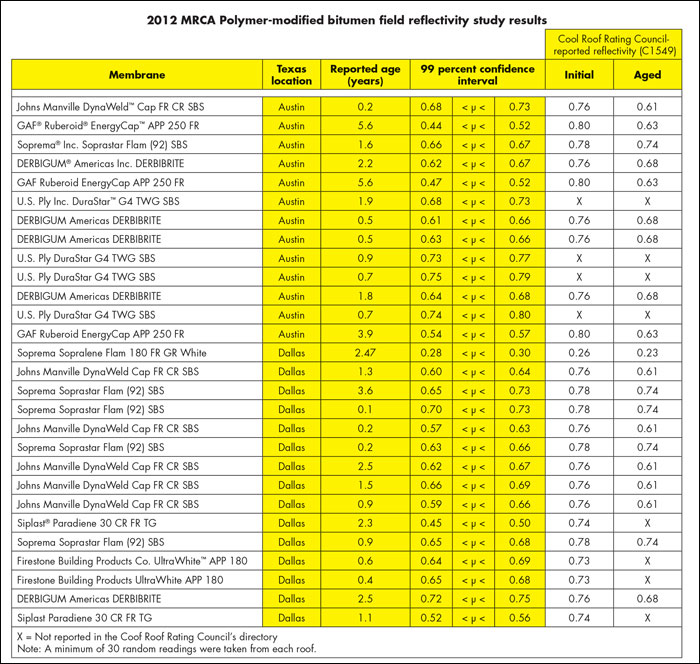 One of the study's underlying goals was to evaluate the reflectivity of highly reflective polymer-modified bitumen roof membranes in-situ (in position on the roof). However, the roofs ranged in sizes from hundreds of square feet to multiple acres. The reflectometer reads slightly more than 1 square inch of surface area at a time. To take an impartial sampling of such large roof areas with such small readings, statistical methods were needed. To this end, a sampling protocol was established for selecting reading areas to produce readings that were as random as possible.

If we were to take random samples using a pure academic methodology, we would have needed to lay a grid on the entire roof, number each grid square and use a random number generator to select our samples from each roof. Although this would have been ideal, time and resources did not permit such an approach.

Instead, we selected a novel and expedient method used by some of the best forensic engineering practitioners for selecting random samples. The method involves using several medium-sized washers tied together with several loops of string. The improvised device then is tossed behind a person's back, and wherever it lands is where the sample is taken. This meant readings were taken on top of saddles, near drains or near rooftop units. All readings were selected in this manner and are considered to be random samplings of the roof membrane.

For each of the 28 roofs sampled, a minimum of 30 random readings were taken from each roof. These random samples from each roof allowed for the use of a statistical tool called a confidence interval.

The following tend to be some of the major conclusions the study has identified:

So what does it mean if a manufacturer's CRRC-reported reflectivity does not fall within the reported confidence interval? Does it mean the manufacturer is providing false information? Not at all. Remember, the CRRC value is a prescribed aging standard, and the ANSI/CRRC-1 test process is conducted by an independent laboratory, not the manufacturer. The values reported here are from in-service, functioning roofs.

Should a contractor, specifier or building owner choose a highly reflective polymer-modified bitumen roof membrane based solely on these in-service reflectivity numbers? Definitely not. Remember, under the reflective surface you still will be using a polymer-modified bitumen membrane from that manufacturer. Therefore, these numbers should only be taken as an indicator of in-service reflectivity and only one of many pieces of information that should be considered when determining a roof system's total life cycle cost.

During MRCA's 2012 Annual Conference and the 2013 International Roofing Expo,® discussions about the study results took place on the trade show floors and in technical sessions. The discussions focused on the responsibilities and liabilities of manufacturers, specifiers and roofing contractors for actual in-service reflectivity values. Specifically, what can be done if there is a real possibility the in-service value reflectivity will not meet or exceed the value claimed on the manufacturer's data sheet?

Those who participated in the discussions concluded manufacturers, specifiers and roofing contractors should consider adding language to their bid documents and contracts stating that because of varying in-service conditions individual to each building and roof, the reflectivity value for the roofing products installed should be limited to as installed, and the aged values should be considered as only an indicator of in-service values, not a guarantee.

Government regulations and public demand for green and white roofs will continue to increase in the future. When installing highly reflective polymer-modified bitumen roof membranes, be sure all parties involved, including the building owner, are familiar with research results regarding realized reflectivity, and consider contract provisions to protect your company from liability if the products do not achieve desired reflectivity results.