What you can't see can hurt you

Before the proliferation of modern roof systems, a typical roof system installed onto concrete decks included a continuous layer of bituminous adhesive that bonded the insulation to the deck. This water-resistant adhesive, applied at about 30 pounds per 100 square feet, also performed as an excellent vapor retarder, reducing the moisture emissions from the concrete into the roofing materials. In addition, typical insulation products of the past had moisture storage capacities higher than those of the foam insulations currently used. Moisture contents of water-sensitive roofing materials remained below levels that caused them to degrade. As a result, older roof systems did not succumb to concrete moisture-related deterioration even though vapor retarder performance may not have been part of the design.

Moisture migrating into roof systems from concrete decks also carries alkaline salts and high pH from the concrete. When the moisture, salts and high pH react with moisture-sensitive materials, the paper facers may grow mold, decay and lose cohesive strength; the water-based adhesives may revert to a liquid; and the curing of foam-based adhesives can be altered or delayed. Gypsum and wood-fiber based cover boards may lose cohesive strength. Mold tends to develop when the relative humidity is above 80 percent and temperatures are above 41 F. Internal condensation can occur daily or seasonally as roofing materials are exposed to varying temperatures. Condensed water can degrade adhesives and facers on insulation boards, as well as gypsum-based and other water-soluble materials. High moisture levels in cold regions can lead to freeze-thaw damage of some roofing materials.

Concrete mixes also have changed. In general, concrete mixes made with fly ash or slag are more durable and may contain admixtures (chemicals added to the concrete to cause a specific performance change) that reduce the water content. These improvements in concrete technology result in concrete mixes being less permeable, which slows the drying of moisture from the concrete. Increased use of lightweight structural concrete, with its pre-wetted aggregates, contributes additional moisture to concrete that further extends a concrete deck's drying period.

In addition, roof deck design has changed. Cast-in-place concrete roof deck design may now include composite construction with the steel forms (metal deck) left in place. The metal deck prevents the drying of moisture from the deck's underside. Although some metal decks contain perforations along the ribs (flutes) on the corrugated forms, the perforation area is only 0.25 to 1.5 percent of the metal deck surface, allowing only a minimal amount of moisture evaporation through the forms.

Concrete is a mixture of portland cement, aggregates, air voids, water and other additives. A portion of the mix water reacts with the cement and any pozzolanic additives present to form the hydrated binder of the hardened concrete. Additional water provides the fluidity for placement and finishing of freshly mixed concrete. Although chemical admixtures may reduce the amount of additional water required, all freshly placed concrete will contain surplus water that is not consumed in hydration reactions.

The mix water added to the concrete mixture is expressed as the water-to-cementitious material ratio (w/cm). Most concrete mixes are batched at 0.40 to 0.55 w/cm. The cement hydration process, most of which occurs within the first month, consumes about 0.25 w/cm. This leaves an additional 0.15 to 0.30 w/cm, which will remain in the concrete as liquid water. 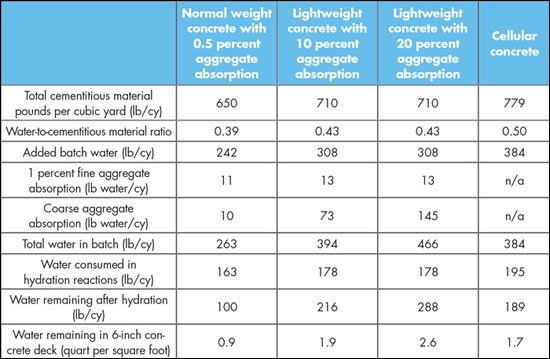 Figure 1: Water added to and remaining in example concrete mixes

To demonstrate how much water remains, we calculated the free water in concrete after hydration for typical roof deck concretes (see Figure 1).

Our calculations show 0.9 to 2.6 quarts of excess water per square foot of concrete surface will be present in a typical one-month-old 6-inch concrete roof deck without accounting for any additional water from the curing process or rain. This is the estimated water that will be available to migrate into a roof system installed after the concrete has developed design strength.

The freshly placed concrete's interior voids (pores, capillaries and aggregate porosity) initially are saturated with water. When drying begins, concrete loses water by evaporation from the deck's surface. The concrete surface may appear dry, but it may be an illusion. As the surface loses water, diffusion begins, drawing water and alkaline salts from the wet interior to the surface. When roofing materials are installed, the water evaporating from the concrete's top surface becomes sealed within the roof system.

Our company used WUFI, a one-dimensional, validated heat and moisture transport software application, to estimate the drying of concrete decks cast over vented metal decks during the one month before roof system installation and during the two-week exposure as required by the cellular concrete manufacturers. We selected three climate zones across the U.S. as benchmarks for our calculations and assumed there was no added water from a curing process or rain during the initial drying period. To estimate the best conditions for drying, we based the drying simulation on local climate data beginning July 1.

Figure 2: Water remaining in concrete roof decks after one month of exposure

We found the amount of water evaporating from exposed concrete roof decks during the month before installing a roof system, with the exception of cellular concrete, is only a small portion of the available excess water remaining in the concrete roof decks. The water that remains in the deck after this initial period of evaporation is shown in Figure 2.

Our results show there is no location in the U.S. that will dry all the excess water contained in the concrete within 30 days after placement.

Figure 3 shows how much drying can occur if the evaporation time is extended to one year. The graphs are based on the assumption that a deck can be left exposed for one year without precipitation, an unlikely condition without providing temporary protection. Normal weight and lightweight concrete decks will contain water if allowed to dry for one year in all regions.

Figure 3: Water loss by evaporation from vented concrete decks exposed for a year (assuming a July 1 summer casting date and no rain during the entire year)

In the real world, water from curing and precipitation must be taken into account, which means the free water content within the concrete can be expected to remain significantly higher for prolonged time periods.

After roofing materials are installed, the moisture in the concrete raises the relative humidity of the air trapped within the roof system above the concrete deck and begins to cause problems. Typical organic roofing components are susceptible to mold and other decay organisms when the relative humidity is greater than 80 percent for prolonged time periods. Relative humidity also is important for determining when condensation may occur within a roof system and when condensed water may begin deteriorating moisture-sensitive roofing components.

Because most roof decks receive a roof system within one month of placement (when concrete is still wet), an alternative approach is needed to address the entrapped water.

Roofing contractors have limited ability to evaluate the amount of water present in roof deck concrete and relate that moisture to potential effects on the proposed roof system's durability.

There are several hand-held surface meters that purport to measure concrete's moisture content. These meters supply numeric values, and some indicate the values to be percentages of moisture. This data is best used as arbitrary numbers to compare readings with a concrete surface known to be dry. The problem is that though the meters may display an acceptable value (suggesting a concrete surface might be dry), the concrete's interior is likely to be wet, and this moisture will migrate to the surface after the deck is covered with roofing materials. Moisture meter readings at the surface can provide a false impression concrete is dry.

Another standard, ASTM D4263, "Standard Test Method for Indicating Moisture in Concrete by Plastic Sheet Method," determines the presence of capillary moisture but will not provide moisture levels. The results of the ASTM International tests are extremely difficult to interpret for evaluating the amount of moisture in roof deck concrete that will migrate into a roof system as the roof system undergoes substantial temperature fluctuations.

Currently, NRCA and the Midwest Roofing Contractors Association (MRCA) state a concrete deck is likely to contain levels of water that could be detrimental to a roof system. Methods for testing moisture are discussed in their publications; however, they acknowledge the roofing industry has no acceptable moisture values for the safe application of roofing. MRCA recommends a roof system should include a complete vapor retarder seal. NRCA cautions the decision of when it is appropriate to cover newly placed concrete is beyond roofing contractors' control.

We believe the only reliable method to predict the potential for excessive moisture within a roof system is to perform hygrothermal modeling simulations for the specific environment and roof system being evaluated. Several computer modeling programs are available for conducting these simulations.

We conducted hygrothermal modeling of modern roof systems in three climate zones using WUFI. The program models building envelope behavior on an hourly basis (transient) according to interior and exterior climate conditions. We modeled our roof systems for two to five years. To develop an effective model, we considered the local climate because changes in temperature play a major role in moisture migrating out of the concrete and into roofing materials.

The next step of our hygrothermal modeling included studying the same roof systems but including a vapor retarder. Our goal was to minimize the potential of any components within the roof system from reaching prolonged relative humidity levels greater than 80 percent. Keeping the relative humidity levels below 80 percent would minimize the potential for mold and condensation within the roof system. Our modeling considered the concrete deck's initial moisture content, the roof membrane's moisture permeance, and the temperature profile between exterior and interior surfaces the system will experience during its service life.

We did not find systems that will perform equally in all climates. In other words, a system that maintains low moisture within the roof system in a hot-humid climate may not work in a hot-dry climate or cold-moist climate. We found each geographical location required some fine-tuning of the roof system to make it work.

Typical concrete roof decks installed on steel forms will contain 1 to 2 1/2 quarts of free water per square foot of deck area after the decks have cured. Our moisture analysis demonstrates much of this water will remain in the concrete deck following roof system installation.

Effective roof systems incorporating a vapor retarder can be designed for specific installations and climatic conditions to minimize the detrimental influence of concrete moisture on roofing materials. Developing these designs requires systematic evaluation of all components in the roof and involves hygrothermal modeling calculations.

The numbers presented are based on the ideal conditions of placing, finishing and curing the concrete without adding water during construction or rewetting by rain. In reality, cement will not be fully hydrated and a deck likely will be wet-cured or subjected to some precipitation before application of roofing materials. These conditions will increase the amount of water entrapped in the deck by the time roofing materials are applied.

More research is needed to determine the maximum amount of moisture roofing materials can safely tolerate. In the meantime, roof systems should be designed and installed with vapor retarders to mitigate moisture entrapped in concrete roof decks.