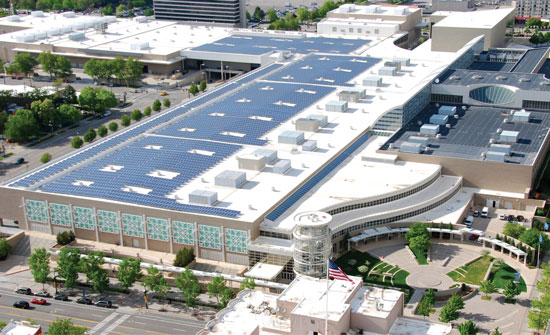 The original Salt Palace in Salt Lake City was built in 1899 and housed a dance hall, theater and bicycle race track, but a fire in 1910 destroyed it. In 1969, an indoor arena called the Salt Palace was completed and served as home to several professional sports teams and host to concerts and other events. In 1994, the arena was demolished and replaced with the Calvin L. Rampton Salt Palace Convention Center. Two expansions in 2000 and 2005 increased the arena's size to its current 679,000 square feet.

In 2012, a 1.65-megawatt fixed-tilt crystalline rooftop photovoltaic (PV) system was added. Developed by CarbonFree Technology Corp., Toronto, and installed by Bella Energy Inc., Louisville, Colo., the PV array is expected to generate about 2.3 million kilowatt-hours of clean electricity during its first year—offsetting about 17 percent of the convention center's annual electricity consumption.