A study of longevity

During the past 20 years, TPO has grown to become one of the most commonly used low-slope roof membranes. Factors contributing to this growth include reflectance, ease of installation and overall value. But as the material has gained in popularity, there have been some questions about its long-term performance. Although the material has not suffered from systemic problems, manufacturers have seen intermittent membrane issues.

Studies have been conducted since 2000 to examine TPO's long-term performance. For example, the Western States Roofing Contractors Association (WSRCA) conducted an in-situ research and testing program of 60-mil-thick TPO membranes from four manufacturers. The test roof systems were installed during 2000-01 in four climate regions throughout western North America. Based on regular sampling and testing, all test roof systems performed well. There were no issues with seam integrity, membrane tightening or overall watertightness. One membrane in Las Vegas had some cracking that was associated with a sharp crease created during the original installation. That same membrane also exhibited some micro-cracking and crazing in a limited section. It can be concluded the high solar irradiance (heat and light), possibly in combination with a less robust formulation, led to this development.

A European study examined three TPO roof systems five and 10 years after installation. As with the WSRCA study, essentially no membrane thickness change was observed. Also, all roof systems were found to be performing well.

Karim Allana, chief executive officer of Allana, Buick & Bers Inc., an architectural and engineering consulting firm in Palo Alto, Calif., examined more than 20 roof systems in the Las Vegas area and found some instances of TPO cracking and crazing. However, some of these instances were caused by a negative interaction between a specific adhesive and TPO membrane in high-heat conditions.

This issue had been discussed earlier by Helene Hardy Pierce, vice president of technical services, codes and industry relations for GAF, Wayne, N.J., and Thomas J. Taylor, Ph.D., GAF's executive director, single-ply systems product development, who concluded some adhesives break down in high-heat situations. The decomposing products were attacking membranes and causing early failure. This was addressed by changing the adhesive formulation. However, Hardy Pierce and Taylor recommend focusing on high-temperature testing.

Although published studies found TPO membranes perform generally well and issues could be assigned to specific isolated causes, there remained anecdotal evidence that high heat was causing TPO membranes to break down.

TPO roof membranes began to be commercially available in the U.S. during the early 1990s with volumes starting to be significant during the late 1990s. In 2003, ASTM D6878, "Standard Specification for Thermoplastic Polyolefin Based Sheet Roofing," was published. The specification covers physical properties, dimensions and durability properties, including ozone resistance, heat aging and weather resistance. Oven aging was tested at 240 F and lasted 28 days. Weather resistance was tested using a xenon arc apparatus, and the initial exposure was doubled in 2006 to 10,080 kJ/m2 in response to some industry concerns about UV resistance.

During the December 2009 ASTM International TPO task group meeting, premature failure of TPO roof systems was discussed. One manufacturer described membrane failures that were found to be related to unanticipated high-heat loads. During these conditions, a membrane was exposed to higher than normal temperatures because of situations such as reflections from nearby surfaces. An accelerated heat-aging test at 275 F for 56 days was proposed, which meant raising the temperature from 240 F and doubling the exposure time.

In early 2010, the Midwest Roofing Contractors Association's (MRCA's) Technical and Research Committee published an advisory bulletin about TPO membranes. MRCA noted: "Information is being circulated in the industry indicating that high solar loading and elevated temperature lead to the premature exhaustion of anti-aging components such as antioxidants, UV [ultraviolet] absorbers, and heat and light stabilizing compounds within TPO. This could lead to the breakdown of the sheet in affected areas."

The bulletin went on to advise: "If situations exist that may commonly elevate temperatures over 160 degrees or increase solar loads beyond ‘normal' incoming solar load, question the manufacturer as to the suitability of their product for the situation … ."

Taylor, representing GAF, noted there were several causes of excessive heat buildup on TPO roofs. These included nearby highly reflective surfaces, dirt and directly attached flexible solar panels. He showed data proving TPO membranes can reach sustained temperatures of around 190 F. He also showed accelerated heat-aging data at 240 F and 280 F with a strong correlation between the two temperatures.

Both Taylor and Randy Ober, Carlisle SynTec's manager of thermoplastics product development, noted their testing showed large disparities in the performance of different manufacturers' TPO membranes. A clear conclusion of the discussion was UV aging does not appear to be an issue for TPO membranes. In contrast, failures within membranes are occurring in high-heat situations and have been observed where UV exposure was limited by significant dirt buildup.

The TPO task group decided to raise the standard to a 240 F exposure for 224 days, or 32 weeks, from 28 days. This demonstrated the industry was prepared to address end-user concerns; the standard was published June 1, 2011.

There is a substantial amount of published and anecdotal evidence that, under normal conditions, TPO roofs do not exceed 130 F surface temperatures. This temperature would be experienced in the roof field that did not exhibit higher than normal soiling, was not affected by nearby reflective surfaces and did not have solar panels directly attached to it. This peak temperature would be experienced under normal circumstances with direct sunlight during summer months.

In contrast, TPO covered with directly attached solar panels has been found to reach temperatures of 190 F for about six hours per day. A premature TPO roof failure exhibited by membrane erosion down to the scrim was associated with membrane temperatures of up to 190 F. This had been caused by excessive soiling with black soot.

During discussions in the ASTM International TPO Task Group, roof system failures associated with temperatures of around 200 F were discussed. Importantly, there has been much anecdotal evidence where TPO membrane failures have been observed but temperatures were not measured. These failures typically were associated with nearby reflective surfaces, and it was assumed heat loads were elevated.

Although there is significant industry knowledge of high-heat issues, manufacturers' approaches vary. Many have included a 160 F sustained temperature upper limit either in their warranties and/or application and specifications manuals. Because of the high heat experienced under solar panel installations, some manufacturers require a "sacrificial" sheet to be installed on top of the membrane. Although a manufacturer may claim a membrane can withstand high heat, use of a sacrificial sheet appears to indicate otherwise.

As discussed, ASTM D6878 has been improved several times to address industry concerns. It is important to note some TPO roof systems that had failed prematurely included either earlier formulations and/or products from suppliers that have since exited the business. Because there is no central repository of roofing claims data, the numbers of these are not known. Although a roofing failure obviously is significant for everyone involved, there are more than 4 billion square feet of TPO roof membranes installed. Against that backdrop, the failures are a small fraction of the installed base.

In fact, because a vast majority of the installed TPO base has proved its durability, the industry has extended warranty lifetimes. However, there has not been good guidance as to lifetime expectations at various end-use temperatures.

What we hope to provide is at least a starting point for considering what TPO membranes will be capable of enduring. Linlin Xing, GAF's research and development manager, and Taylor studied the time to failure of a wide range of commercial TPO membranes of various thicknesses at 240 F and 280 F.

Failure was defined as surface cracking when an operator viewed a roof with a 7X eyepiece while bending over a 3-inch diameter mandrel. That data has been reanalyzed and used to predict failures at 160 F, 180 F and 200 F, assuming eight hours per day exposure at temperatures shown in Figure 1. 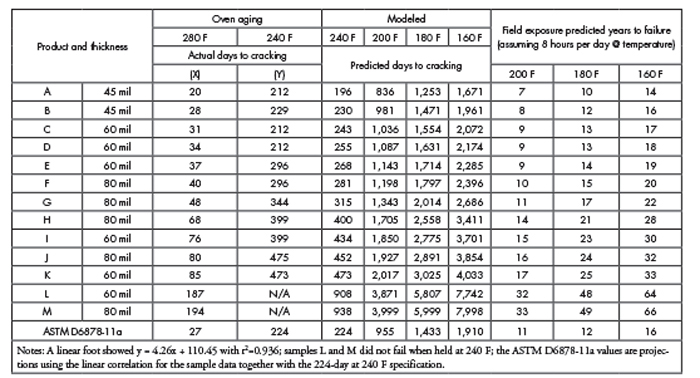 The excellent correlation between the two data sets strongly suggests the failure mechanism is the same at either temperature. This can only be assumed to be the case for the range of stabilizer types currently in use. Therefore, within the range of formulations used by manufacturers, the choice of test temperature simply drives the test duration and not the specific longevity prediction.

The predicted years to failure, assuming eight hours per day exposure to temperatures between 160 F and 200 F, are shown graphically in Figure 2.

Figure 2 shows the performance level suggested for ASTM D6878-11a plus the general area within which the sample membranes performed. It should be noted the worst-performing materials no longer are manufactured. 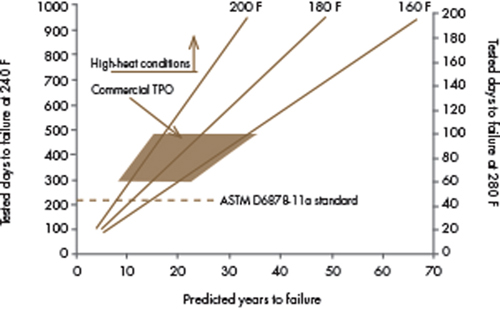 Having studied the heat resistances of TPO membranes and used the data to predict years to failure, we can discuss the likely end-use expectations. From Figure 1, it can be seen a membrane that lasts 25 years at 160 F for eight hours per day only will last around 12 years at 200 F for eight hours per day. As discussed earlier, there are many examples of membrane failures at elevated temperatures. This suggests that though the use of eight hours per day at a given temperature as a basis may seem excessive, it is predictive of actual performance. This may be a result of additional stressors such as mechanical wear and tear, light and UV radiation.

Based on the data shown in Figure 1, we suggest the following basic categories of performance:

Figure 3 shows the test requirements for these categories of TPO membranes.

It is clear TPO has a large and successful installed base of more than 4 billion square feet. However, there is clear evidence TPO membranes can experience heat-related failures in situations where heat buildup is beyond normal expectations. These situations include roofs that have adjacent taller reflective surfaces, excessive dirt buildup and high-altitude Southwestern locations.

TPO membranes, when tested by heat aging at 240 F to 275 F, show a wide range of days to failure. This range translates to significant differences in predicted years of service. Clearly, TPO membranes are not all equivalent; some perform far better than others.

For articles related to this topic, see: