With the same drive NRCA CEO Reid Ribble promotes professionalism in the roofing industry, he is equally passionate about trying to make Congress a more effective, representative legislative body that seeks bipartisan solutions to U.S. problems.

Ribble, a former Republican congressman from Wisconsin’s 8th district, was one of six former members of Congress invited to present testimony in May to the House of Representatives’ Select Committee on the Modernization of Congress. Ribble, who is a harsh critic of the power held by congressional leadership, told the committee: “[I]t seems the leadership no longer trusts a fair process. Or they no longer trust what may result from a fair process, so they rig the system to get the results they want.”

How Congress could change 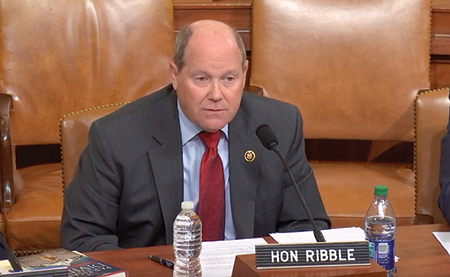 NRCA CEO Reid Ribble testifies before the Select Committee on the Modernization of Congress.

Ribble, who served in Congress when Republicans were in the House majority, is a strong believer the speaker of the House and committee chairmen wield far too much power to the detriment of rank-and-file members who are expected to adhere to the party line.

Ribble testified the House operates with a severe bias toward leadership and party fealty, and most legislation is driven by and frequently written by leadership with little opportunity for input from individual congressmen.

“Individual members don’t really matter,” he said. “[W]hen legislation actually did move through committees, committee chairmen often lorded over or ignored the members rather than engaging the minds of committee members themselves. Too much legislation was driven by committee chairmen and staff, and as rank-and-file committee members, we often were left out of the discussion until a mark-up occurred … at which point you are often expected to simply vote the party line. I routinely joked that as a member of Congress I was nothing more than a figure head. Unfortunately, the process itself discourages active participation by those members who came to Congress … trying to make things better.”

Ribble strongly favors changes in the rules that govern the House of Representatives to give more power to individual members and promote bipartisan legislation. He provided the committee with several specific recommendations:

Ribble, a former roofing contractor, ran for Congress primarily because of his concerns about government spending. He was appointed to the House Budget Committee, chaired by former Speaker of the House Paul Ryan. Ribble admits to being naïve, thinking committee members would propose and debate proposals and craft legislation for the public good. He quickly became disillusioned by partisan politics and found Congress became even more partisan during his years in Congress.

As a member of Congress, Ribble sought a budget reform package that would lead to a balanced budget over a period of several years but found both parties were more interested in budget gimmicks than truly enacting legislation that would balance the budget. He also proposed Congress adopt a biennial budgeting process. Because the speaker of the House did not favor these proposals, which would reduce the power of leadership, nothing happened. Ribble says the budget still is put together by the speaker and appropriations chairmen.

When first running for Congress, Ribble committed himself to a four-term limit but chose to retire after three terms even though he was assured re-election without opposition. He was frustrated by a structure and practice that he says works against seeking bipartisan cooperation and cedes all authority and power to the leadership regardless of which party controls Congress, citing the complete control the speaker of the House and the majority leader of the Senate have over what legislation will reach the floor of the House or Senate for a vote.

Ribble chose to walk away from his congressional career because he was frustrated. He found individual members could not advance legislation and attempts to develop solutions to major problems in a bipartisan manner were not supported by party leadership.

Ribble has repeatedly spoken about the U.S. facing a major demographics problem because of an aging population, warning demographics will bankrupt the U.S. if a bipartisan solution to the Social Security system is not reached. Ribble found Congress was not serious about facing major financial problems; a crisis would have to happen to prompt action.

In the summer of 2016 during his final year in Congress, Ribble submitted a proposal for the reform of Social Security that was praised by nonpartisan organizations and won bipartisan support, yet the House took no action.

Ribble also favors a constitutional amendment to change the term of House members from two to four years and have House members elected in non-presidential election years—he believes too much time is spent raising money, especially in swing districts. Ribble thinks Congress will function more effectively if there were more of what he calls “pragmatic” congressmen coming from less one-sided districts.

Ribble also recommends political action committee contributions from industry groups not be allowed to be given to members of Congress who sit on committees that have jurisdictional authority over that industry. In other words, a banking industry PAC would not be permitted to contribute to members of the House Financial Services Committee, which has jurisdictional authority over banking legislation.

A hope for the future

Ribble’s views are undoubtedly shared by many others, but Congressional disfunction remains. Perhaps Congress would become a more effective legislative body if more districts became competitive so members of Congress would need to be responsive to a broader range of the populace. Pragmatic Republicans and pragmatic Democrats are more likely to act in a bipartisan manner to enact legislation to address important issues than more doctrinaire colleagues from lopsided districts.