You understand a building's roof assembly serves an important role in improving the building's overall energy efficiency and reducing building owners' heating and cooling costs. However, you may not realize codes mandate minimum thermal insulation requirements for the energy efficiency of most buildings and, in some instances, these minimum R-values may be more than you are accustomed to providing.

Energy conservation codes usually are adopted by states and apply to all buildings in a state. Most states have adopted one of several editions of the International Energy Conservation Code (IECC), published by the International Code Council (ICC), to serve as the technical basis of their energy codes. In some instances, states modify IECC to address specific regional or local issues.

Because IECC's 2006 or 2009 editions serve as the basis for most energy codes in the U.S., I will focus on these energy codes and their requirements for commercial buildings as defined by IECC.

IECC's 2006 and 2009 editions apply to all residential and commercial buildings that are not addressed by the International Residential Code for One- and Two-family Dwellings (IRC). IRC contains energy-conservation requirements that specifically apply to one- and two-family dwellings.

IECC defines commercial buildings as all other buildings that are not included in IECC's definition of "residential buildings" or addressed by IRC. 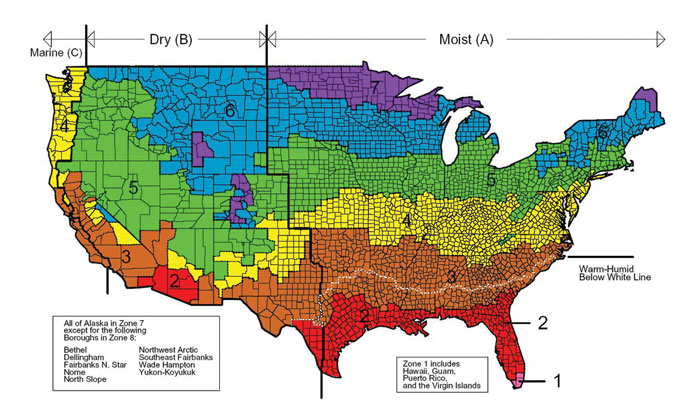 IECC and ASHRAE 90.1 base their minimum R-value requirements on the climate and geographic location in which the building being considered is located. For this purpose, the U.S. is divided into eight climate zones. A U.S. climate zone map is shown in Figure 1.

IECC's and ASHRAE 90.1's roofing-related provisions also are based on three roof construction configurations: insulation entirely above deck, metal buildings and attic, and other.

Using ASHRAE 90.1's prescriptive method for determining roof assemblies' minimum R-values is largely similar to the process used in IECC; however, the results may not be the same. Once the climate zone in which a building is located is identified, the specific minimum required R-value can be determined using ASHRAE 90.1's Table 5.5—Building Envelope Requirements, taking into consideration the roof construction configuration.

In Climate Zones 1, 2 and 3, ASHRAE 90.1's prescriptive method also allows for reducing a roof assembly's minimum required R-value if the roof assembly's surface has a high albedo (high reflectivity and emittance). The specific minimum thresholds of solar reflectance and thermal emittance allowable for this R-value reduction vary slightly between ASHRAE 90.1's 2004 and 2007 editions and are described in ASHRAE 90.1—04's Exception to 5.5.3.1 and ASHRAE 90.1-07's Section 5.5.3.1.1-High Albedo Roofs.

Minimum R-values for roof assemblies installed with insulation entirely above the deck are provided in Figure 2.

Comparing IECC's and ASHRAE 90.1's minimum R-values reveals IECC's values usually are equal to or slightly more than those of either ASHRAE 90.1 edition. Also, in Climate Zones 1 through 3, ASHRAE 90.1 allows for a reduction in minimum-required R-values for reflective roof surfaces. This reduction is not provided for when using IECC's method.

These differences illustrate the importance of designers knowing which energy code and edition applies to the specific building being evaluated.

IECC's requirements for upgrading existing roof systems to R-values defined by the current energy code are somewhat unclear and subject to interpretation.

Section 101.4.1—Existing Buildings indicates: " … This code shall not be used to require the removal, alteration or abandonment of, nor prevent the continued use and maintenance of, an existing building or building system … ."

Roof assemblies generally are considered to be building systems in the context of the code, which means Section 101.4.1 and Section 101.4.3 can be interpreted to apply to reroofing.

An exception to Section 101.4.3 applies specifically to certain reroofing situations. Exception 4 indicates: "Construction where the existing roof, wall or floor cavity are not exposed" need not comply with the current code provided the building's energy use is not increased.

This can be interpreted to mean it is unnecessary to upgrade a new roof system to the current energy code unless deck replacement is part of a reroofing project. However, another reasonable interpretation is this exception only applies to roof assemblies with below-deck insulation and does not apply to the roof construction configuration with insulation entirely above deck.

Exception 5 in IECC 2009 states: "Reroofing for roofs where neither the sheathing nor the insulation is exposed" need not comply with the current code provided the building's energy use is not increased. This statement appears to address roof re-cover situations. This specific provision does not appear in IECC 2006.

Buildings undergoing a change in occupancy type that results in an increase in demand for energy are clearly required to meet the adopted energy code.

The energy code provides the minimum R-value requirements for most roof assemblies and may require more insulation.

I encourage you to be familiar with applicable energy codes.