Keeping up with I-codes

Model codes, such as those developed by the International Code Council (ICC), serve as the technical basis for state, county and local adoption of codes that regulate the design, construction and operations of buildings.

ICC, the promulgator of the International Building Code, recently updated and published revised editions of its model codes, referred to as the "I-codes." As jurisdictions begin the processes of updating their codes, you should be aware of the roofing-related changes incorporated into the 2015 I-codes. Following is an overview of some of the more significant roofing-related changes.

A new section, Section 1509—Radiant Barriers Installed Above Deck, has been added.

In Section 1511—Reroofing, IBC 2015's requirements for roof system replacement and roof re-covering have been reformatted from those in IBC 2012's Section 1510 (and previous editions). Also, an exception has been added (Sec. 1511.1, Exception 2) clarifying the addition of secondary drains or scuppers is not required in roof system re-covering and replacement projects.

In Chapter 12—Interior Environment, the requirements for attic ventilation have been revised to be better coordinated with those contained in the International Residential Code. Also, provisions for unvented attics and unvented enclosed rafters (steep-slope compact roof assemblies) have been added in Section 1203.3.

In the 2015 International Residential Code® (IRC 2015), a majority of the roofing-related requirements appear in Chapter 9—Roof Assemblies.

In Section R902—Fire Classification, similar to IBC 2015, an exception has been added allowing slate roof systems to be considered Class A without fire testing.

In Section R908—Reroofing, IRC 2015's requirements for roof system replacement and roof re-covering have been reformatted to be similar to those in IBC 2015. Also, an exception has been added (Sec. R908.1, Exception 2) clarifying the addition of secondary drains or scuppers is not required in roof system re-covering and replacement projects.

In Chapter 8—Roof-Ceiling Construction, IRC 2015's requirements in Section R806—Roof Ventilation for attic and enclosed rafter ventilation and unvented attic and unvented rafter assemblies have been somewhat reformatted and generally are consistent with IBC 2015.

In Chapter 4[CE]—Commercial Energy Efficiency, the reference to ASHRAE 90.1, "Energy Standard for Buildings Except Low-rise Residential Buildings," as an allowable design option has been updated from the document's 2010 edition in IECC 2012 to ASHRAE 90.1-13 in IECC 2015. As a result, building assemblies, including roof assemblies, will be required to be somewhat more energy-efficient. 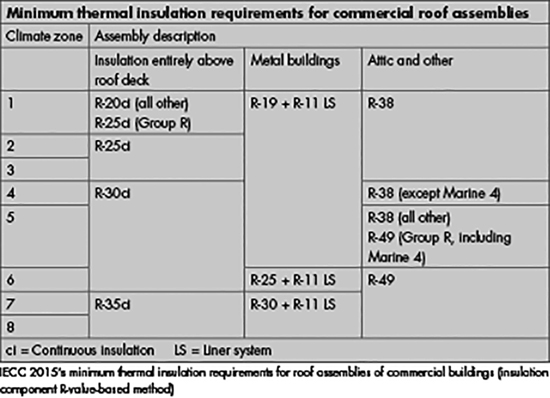 For situations where three-year aged solar reflectance values for a roofing product are not available, IECC 2015's Section C402.3.1 provides a calculation method based on CRRC-1-12, "CRRC-1 Standard."

In Section C503—Alterations, an exception has been added indicating air retarders are not required to be installed as roof assembly components for roof system re-cover or replacement projects where the building renovations do not also include alterations, renovations or repairs to the remainder of the building's envelope. This new requirement exempts many reroofing projects from IECC 2015's air retarder requirements.

Provisions have been added in Section 1101.7—Roof Design and Section 1105.5—Roof Drain Flow Rate indicating drains' flow rates are required to be based on the maximum anticipated ponding at a roof drain.

Table 1106.2—Storm Drain Pipe Sizing, Table 1106.3—Vertical Leader Sizing and Table 1106.6—Horizontal Gutter Sizing now are based on drainage capacity in gallons per minute. In IPC 2012, the corresponding tables were based on rainfall rates expressed in inches per hour.

With the publication of the 2015 I-codes, you should begin preparing for the new codes' adoptions in the areas where you do business. ICC intends for the latest edition of the I-codes to be adopted by jurisdictions beginning this year.

I encourage you to contact the local authorities having jurisdiction in the areas you work to learn of the specific codes and editions that currently are applicable, as well as any plans or timetables the jurisdictions have for code updates.

The 2015 editions of all I-codes, except IgCC 2015, which is due in May, are available for purchase from the International Code Council by calling (800) 786-4452 or accessing www.iccsafe.org. To access NRCA's publications addressing building codes applicable to roofing work, visit shop.nrca.net.


The demographics of a typical code official

In August 2014, the International Code Council (ICC) published "The Future of Code Officials: Results and Recommendations from a Demographic Study."

This study reveals a typical code professional is between the ages of 55 and 64. He or she is a jurisdiction employee rather than an employee of a third-party provider and works in a one- to nine-person department that serves a community of fewer than 75,500 people.

A typical code professional earns between $50,000 and $75,000. (The median household income in 2012 was $51,017 according to the U.S. Census Bureau.) He or she has between 26 and 35 years of experience in the building industry but only five to 15 years as a code official. A code official typically enters the code profession while in his or her 30s and held between one to three jobs before becoming a code professional. His or her first job was a tradesperson.

His or her current role as a code official is an inspector, plan reviewer or department manager. Given the relatively small size of a typical department, it is likely he or she may simultaneously serve in some or all these roles.

Most code professionals expect to leave the building regulatory profession within the next five to 15 years.