Using trusses to support roof systems can result in problems

Editor's note: Following are the author's opinions about various building design issues. Views expressed are not necessarily those of Professional Roofing or NRCA.

During this time of mass residential construction, many homes are being designed and built with trusses as the primary means of roof support instead of traditional dimensional framing lumber supports. Materials used to make trusses are more cost-effective and easier to obtain in large amounts than traditional rafter and joist lumber, but this shift to more frequent use of trusses as roof supports has brought with it some detrimental side effects.

For example, a growing number of home builders have reported complaints from homeowners about cracks occurring in the drywall at the tops of interior walls on homes' uppermost levels. The most severe cracks typically occur near the centers of attic trusses. Building and design professionals have concluded these cracks are caused by a condition called "truss uplift."

Truss uplift involves significant differential movement that ultimately causes cracks to open in drywall. This occurs when one portion of a truss expands more than the rest, forcing the truss to lift upward at its center and cause a separation between the truss and interior wall. 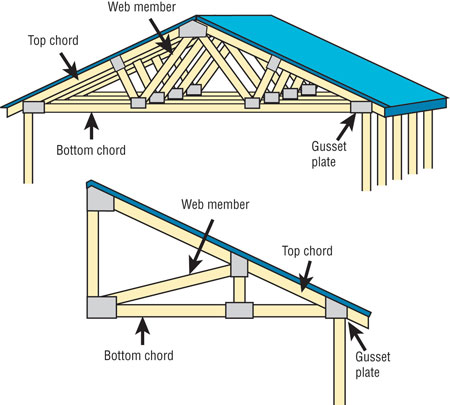 Truss uplift occurs when a truss's top chords expand because of exposure to moisture. As the top chords expand, internal tensile stress occurs in the truss's web members, which pulls up the bottom chords (and the attached ceiling drywall).

Although truss uplift typically is more of a cosmetic problem than a structural problem, it can lead to increased energy consumption for cooling and heating buildings and be a source of excess moisture intrusion into attic spaces.

Unfortunately, there currently are few ways to completely eliminate truss uplift; however, employing proper moisture-management techniques can significantly lessen its effects. Although these techniques are beyond the scope of work typically performed by roofing contractors, you should find the information useful.

Trusses are prefabricated structural assemblies designed to support a home's roof system and top floor ceilings. They consist of dimensional lumber fastened together with gusset plates resulting in triangular-shaped openings/spaces. The outside members of a truss are called "chords," and the inner members are referred to as "webs."

The shift from site-built rafters to prefabricated trusses has become increasingly necessary because of the housing growth the U.S. has experienced during the past 10 years, and ease of installation is a factor. Rafters and joists typically are made from 2- by 12-foot boards, which often become scarce during housing booms. Many 2- by 12-foot boards currently available are cut from lower-quality lumber and prone to warping.

Manufacturers can use better-quality, smaller-dimension boards, such as 2x4s, which are more affordable and available but still provide the required structural strength when assembled into trusses. Although these qualities make trusses a practical method for providing structural roof support, truss uplift and the resulting drywall cracks present some challenges.

Truss uplift is caused by wood's natural response to moisture exposure. This response occurs when humidity changes differentially in two areas (an attic floor and attic ceiling, for example). A truss's top chords expand as their moisture content increases.

Problems resulting from truss uplift are most common with flat-bottomed trusses in homes during winter when a truss's bottom chords, often covered by insulation, are kept warm and dry while its top chords are exposed to moisture from condensation. During winter months, warm, humid air emanates from buildings' interior use and occupants. The uplift movement occurs because, as the truss's upper components resize themselves under the differential moisture conditions, internal tensile stress occurs in the truss's web members, which then pulls up the bottom chords (and the attached ceiling drywall), resulting in a separation along the wall-to-ceiling juncture of the drywall.

To put this into perspective, consider a truss with top chords made of two members, each measuring 30 feet in length. The total movement anticipated from winter swelling caused by the truss's moisture content increasing is a 0.72-inch expansion per side, or a 1-inch total rise of ridge above the bottom chords. And once a crack forms inside a home, additional moisture generated by occupants and their activities can escape into the attic, travel to the cold attic ceiling surface, condense on the truss's top chords and cause further truss uplift.

The following factors can affect relative humidity in attics and should be considered when installing trusses as a roof system's primary means of support:

Although truss uplift is a powerful force, there are a number of ways you can min­imize its negative effects.

For many years, home builders have coped with truss uplift and the resulting separation between wall and ceiling gypsum boards by fastening ceiling gypsum boards at least 16 inches from interior partitions. Another popular method is to fasten crown molding to the ceiling and allow it to move up and down with the truss-induced movement, thus covering the gap formed at the top of the wall. Gaps tend to fluctuate in size, getting smaller in summer and larger in winter.

Additionally, humidity-controlled fans can work well, and unvented attics will solve the problem.

Although truss uplift can pose some hassles, trusses likely will remain the preferred roof support method for the foreseeable future. Truss uplift can be accommodated or eliminated if home designers and builders plan ahead and implement measures during construction to minimize its effects. An attic with an effective moisture-management system is a good start.