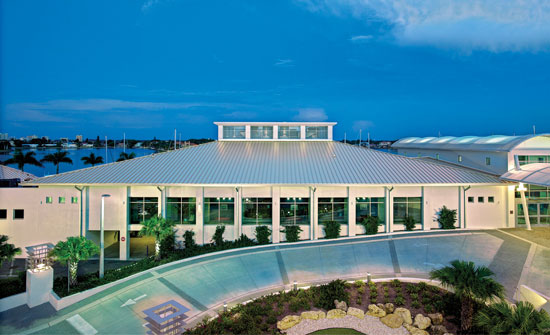 Founded in 1926, the private Sarasota Yacht Club is located on Florida's Sarasota Bay. Because of the property's easy access to the Gulf of Mexico, in 1943, the U.S. government leased the club's property for the duration of World War II for use as a U.S. Air Force Crash Boat Rescue Base. In January 1946, the club regained control of its property.

In 2002, the club initiated a major expansion and modernization of its marina. Dock extensions, electrical upgrades, a new pump-out station, new fuel and fire lines, and new security lighting established the club's position as the premier yacht club in the Sarasota area.

The new two-story building and roof system present a striking coastal contemporary presence on Sarasota's waterfront when passing over the John Ringling Causeway Bridge or from nearby Saint Armands Key.