Cooling down the house

by Hashem Akbari and Andre Desjarlais

Energy-efficient roofing materials are becoming more popular, but most commercially available products are geared toward the low-slope sector. However, research and development are taking place to produce "cool" residential roofing materials. 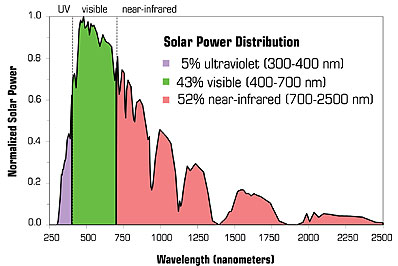 Figure 1: Peak-normalized solar spectral power—more than half of all solar power arrives as invisible, "near-infrared" radiation

Cool, nonwhite roofing materials are expected to penetrate the roofing market within the next three years to five years. Preliminary analysis by LBNL and ORNL suggests the materials may cost up to $1 per square meter more than conventionally colored roofing materials. However, this would raise the total cost of a new roof system only 2 percent to 5 percent.

Developing the colors to achieve the desired solar reflectances involves much research and development. So far, LBNL has characterized the optical properties of 87 common and specialty pigments that may be used to color architectural surfaces. Pigment analysis begins with measurement of the reflectance—r—and transmittance—t—of a thin coating, such as paint film, containing a single pigment, such as iron oxide red. These "spectral," or wavelength-dependent, properties of the pigmented coating are measured at 441 evenly spaced wavelengths spanning the solar spectrum (300 nanometers to 2,500 nanometers).

LBNL has produced a database detailing the optical properties of the 87 characterized pigmented coatings (see Figure 2). Its researchers are developing coating formulation software intended to minimize NIR absorptance (and maximize the solar reflectance) of a color-matched pigmented coating. The database and software will be shared with the consortium manufacturers later this year. 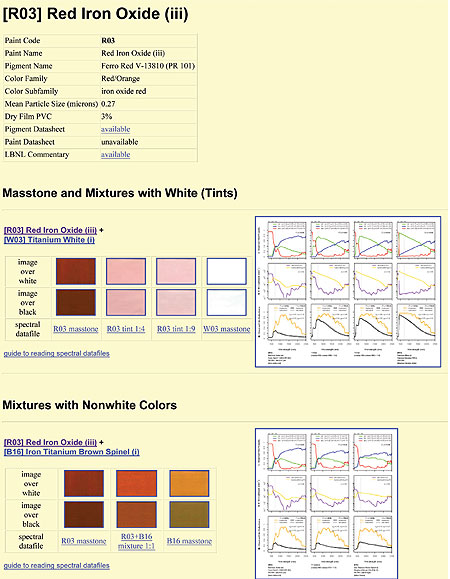 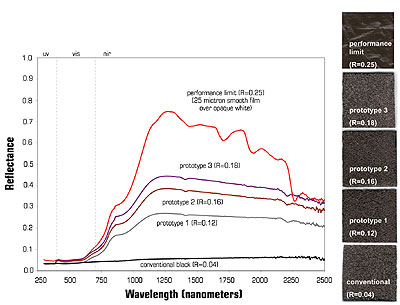 There are three ways to improve solar reflectances of colored tiles: use clay or concrete with low concentrations of light-absorbing impurities, such as iron oxides and elemental carbon; color tile with cool pigments contained in a surface coating or mixed integrally; and/or include an NIR-reflective sublayer, such as a white sublayer, beneath an NIR-transmitting colored topcoat.

American Rooftile Coatings, Fullerton, Calif., has developed a palette of cool, nonwhite coatings for concrete tiles. Each of its COOL TILE IR COATINGS™ shown in Figure 4 has a solar reflectance greater than 0.40. The solar reflectance of each cool coating exceeds that of a color-matched, conventionally pigmented coating by 0.15 (terra cotta) to 0.37 (black).

Cool, nonwhite pigments can be applied to metal with or without a white sublayer. If a metal is highly reflective, the sublayer may be omitted. The polymer coatings on metal panels are kept thin to withstand bending. This restriction on coating thickness limits pigment loading (pigment mass per unit surface area).

ORNL and the consortium manufacturers also are exposing roof samples to 5,000 hours of xenon-arc light in a weatherometer, a laboratory device that accelerates aging via exposure to ultraviolet radiation and/or water spray. ORNL will examine the naturally weathered samples for contaminants and biomass to identify the agents responsible for soiling. This may help manufacturers produce roofing materials that better resist soiling and retain high solar reflectance. Changes in reflectance will be correlated to exposure.

Figure 4: This is a palette of color-matched cool (top row) and conventional (bottom row) roof tile coatings developed by American Rooftile Coatings, Fullerton, Calif. Shown on each coated tile is its solar reflectance.

One of the Fair Oaks homes roofed with low-profile concrete tile was colored with a conventional chocolate brown coating (solar reflectance 0.10), and the other was colored with a matching cool chocolate brown (an American Rooftile Coatings COOL TILE IR COATING™ with solar reflectance 0.41). The attic air temperature beneath the cool brown tile roof has been measured to be 3 K to 5 K cooler than that below the conventional brown tile roof during a typical hot summer afternoon (273.15 K equals 0 C).

These reductions in attic temperature are solely the result of the application of cool, colored coatings. The use of these cool, colored coatings also decreased the total daytime heat influx (solar hours are from 8 a.m.-5 p.m.) through the west-facing concrete tile roof by 4 percent and the south-facing metal shake roof by 31 percent (see Figure 5). 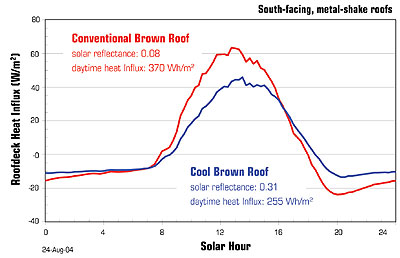 ORNL also is testing several varieties of concrete and clay tile on a steep-slope roof to further investigate the individual and combined effects of cool, colored coatings and subtile ventilation on the thermal performance of a cool roof system.

Provided energy-efficient products continue to perform satisfactorily, we expect cool, nonwhite metal, tile and shingle products to penetrate the roofing market within the next three to five years.