Impact-resistant roofing fulfills a growing demand in the residential market

From extreme weather to economic stressors, homeowners have a lot to consider when protecting their homes. According to the Union of Concerned Scientists, a nonprofit science advocacy organization based in the U.S., there has been a surge in the frequency and strength of property-damaging storms such as tornadoes and hailstorms in the U.S. As a result, homeowners are looking for durable roofing solutions that will withstand these elements.

Impact-resistant roofing means the products used have received Class 3 or 4 impact ratings from UL LLC. The rating is earned when the roofing material passes a series of impact-related tests. A Class 4 impact rating is the highest rating UL awards to roofing products.

Following are some factors contributing to an increasing demand for impact-resistant roofing materials.

Even before the COVID-19 pandemic and the economic pressures related to it, there were many factors keeping people in their homes for the long haul. According to Census Bureau data, during the 1950s, about 20% of the U.S. population moved every year. When factories would close, workers moved to take new factory jobs in other parts of the country. Young people flocked to cities and growing suburbs in droves where jobs were plentiful and rent was cheap. That trend continued for many decades. In 1987, 18.1% of Americans moved to a new home, but by 2019, the percentage fell to 9.4%.

There are numerous reasons why people are staying in place. According to Redfin, a real estate brokerage, new homes are more expensive than they were 70 years ago; wages haven’t kept up with inflation; and young people entering the workforce generally have more debt than their parents or grandparents.

According to a March 2020 Business News Daily online article, working from home was becoming more common even before the pandemic. Many workers entering the workforce now are scoring big-city jobs while avoiding big-city prices by staying in their family homes. As homeowners remain in their homes longer, they want the roof systems on their homes to last longer.

Costly hailstorms are increasing in the U.S., with annual damage estimates now averaging between $8 billion and $10 billion, according to a 2018 article published online by The Washington Post. Hailstorms account for 70% of insured loss from severe storms. In 2017, two storms alone—one in Denver and the other in Minneapolis—caused $2 billion of property damage. In Denver, the damage included 159 miles of heavily damaged roof systems caused by hailstones the size of baseballs.

The Washington Post reports there isn’t so much a dramatic rise in the number of hailstorms as there is an increase of residential development in areas where hailstorms are frequent. In Phoenix, what was farmland 50 years ago has been replaced with dense residential areas where hailstorms recently have caused significant damage. There also has been explosive growth in hail-prone cities such as Dallas, Denver and Minneapolis during the past few decades.

According to Climate Central, an independent organization of scientists, there has been a subtle but measurable increase in tornado activity during the past few decades. The trend is consistent with an eastward shift in the drier climate zone of the western U.S., where climate change projections increase the likelihood of severe storms.

The number of large tornado outbreaks also is on the rise. In a 2016 study published by Science magazine, during an outbreak of six or more tornadoes during a six-hour period, there were about five more EF-1 or greater tornadoes than the largest outbreaks during the 1950s, and another study published by Science magazine in 2014 showed the number of days with more than 20 tornadoes also has increased. This has especially been noticeable in the southeast U.S., where tornado activity has increased significantly between November and February.

According to the National Environmental Education Foundation, the intensity of Atlantic hurricanes and the number of Category 4 and 5 hurricanes has increased since the 1980s. These increases are in part a result of warmer sea surface temperatures in areas where Atlantic hurricanes form and pass through. Stronger wind speeds, more rain and higher storm surges—influenced by increases in surface, water and air temperatures—add up to potential for more destruction. USA Today reports the average cost of one hurricane is $21.6 billion in damage. For comparison, the costliest hurricane in U.S. history, Hurricane Katrina, caused $160 billion in damage.

These powerful storms create strong winds, lightning, hail and heavy rains that damage roof systems. The winds of supercell storms can create a vacuum that sucks roofing materials right off homes. Branches, building materials, rocks and other debris caught in storms can smash into roofs at high velocities.

In response to increasing storms and the damage they cause to roof systems, manufacturers have developed a variety of impact-resistant roofing materials and styles. The most popular for residential use is SBS polymer-modified asphalt shingles. SBS is a rubber-like polymer known for its durability and elasticity. When infused into asphalt shingle products, SBS enhances flexibility with added crack resistance.

SBS polymer-modified asphalt shingles typically are more expensive than standard asphalt shingles but can be a great advantage in hail-prone areas of the U.S. where homeowners sometimes have to replace large sections of their roof systems annually and in communities along the Atlantic seaboard where hurricanes are inevitable.

In most areas, insurers may provide homeowners with discounted rates for installing SBS polymer-modified roofing products or offer benefits such as free upgrades to SBS polymer-modified products. Many factors determine whether a homeowner is eligible for discounts, including a home’s location, insurer policies and the impact class of the product used. Homeowners who constantly have their lives interrupted to accommodate roof system repairs are prime candidates for installing impact-resistant roofing products.

Stamped panel metal roofing is another popular impact-resistant product gaining popularity for residential applications. Metal is an extremely durable, long-lasting, worry-free product. In general, it has superior impact, fire and wind resistance compared with standard asphalt and wood shake roofing products. Unlike other roofing materials, which may need to be replaced more often, metal roofing typically has a life expectancy of 50 years or longer. Metal roofing is versatile and can be shaped to resemble natural roofing products, such as shake, slate and tile, without the added weight and maintenance associated with those materials.

Metal roofing is algae-resistant, generally 100% recyclable and comes with an option of solar-reflective paint coatings that may significantly reduce rooftop temperatures, contributing to considerable energy savings over the life of the product, according to CertainTeed.

Additionally, certain types of metal roofing don’t perform well in coastal areas because of salty sea air, so galvanized (zinc-coated) steel, zinc, aluminum or copper roofing products may be optimal in those areas.

UL 2218, “Impact Resistance of Prepared Roof Covering Materials,” currently is the most reliable test for determining impact resistance of roofing products. The test uses steel balls ranging from 1 1/4 inches to 2 inches in diameter. These balls are dropped from heights ranging from 12 to 20 feet, depending on the size of the ball. The test roof section is hit twice in the same spot.

To pass the criteria in UL 2218, the roofing material, back surface and layers underneath must show no evidence of tearing, fracturing, cracking, splitting or rupture. Achieving the highest level of impact resistance, Class 4, is difficult but necessary to ensure impact-resistant roofing shingles live up to their promises.

Rarely, if ever, will a Class 4 impact-resistant roofing product make a claim of being “hail-resistant.” Although Class 4 products are less prone to damage from a hailstorm, there are no roof systems that are indestructible in all cases.

Additionally, though the UL 2218 test is the best current test method and is the established industry standard, it’s not a perfect method. Impact-resistance testing is done on new, nonweathered products in temperature-controlled settings. Hail rarely hits a roof that is brand-new and at a moderate temperature. In reality, hail typically occurs after a rapid drop in temperature, often accompanied by cooling rains that result in large amounts of thermal stress on roof surfaces at the time of impact. 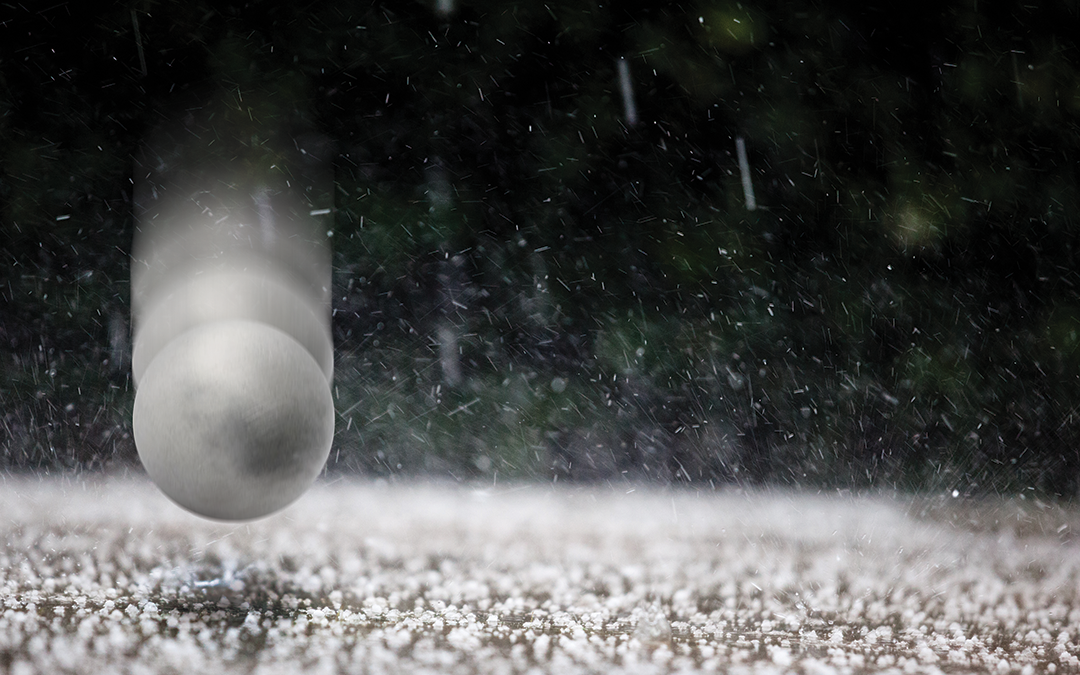 Extended exposure to the elements significantly can decrease the hail resistance of most roofing products. FM 4473, “Specification Test Standard for Impact Resistance Testing of Rigid Roofing Materials by Impacting with Freezer Ice Balls,” uses ice balls to replicate hailstones and propels them at roofing samples at similar speeds experienced during hailstorms and is done at temperatures between 60 F and 90 F. Although many impact-resistant products pass the Class 4 standard, manufacturers generally do not warrant against damage caused by the impact of hail or any other material.

However, in most circumstances, impact-resistant roofing shingles are a great investment for homeowners, particularly those who encounter storms on a regular basis. Depending on where a homeowner lives, impact-resistant roofing shingles can be more difficult to sell, but as climate change shifts traditional weather patterns and climate zones, areas once considered safe from severe storm activity no longer may be safe now or into the future. For example, Climate and Atmospheric Science recently published a study that analyzed tornadoes between 1979 and 2017 and found storm activity actually is decreasing in the traditional tornado-prone area of the midwest U.S. and shifting southeast to states such as Alabama, Georgia and Mississippi.

Every year, thousands of homeowners have their roof systems compromised by storm damage. Although some areas of the U.S. are more affected by regular storm damage than others, all homeowners can benefit from the long-term protection of impact-resistant roofing materials.

In a world where the weather and the economy are uncertain, impact-resistant roofing products can provide residential roofing contractors with more service options their clients will appreciate.