In addition to being known for the Bulls and Bears (who did quite well this year), deep-dish pizza, the Magnificent Mile and extreme weather, Chicago also is known for its world-renowned museums, such as the Field Museum of Natural History, Art Institute of Chicago and Shedd Aquarium. A museum that often is overlooked, despite its 60,000 visitors per year, is the Oriental Institute Museum, which is part of The University of Chicago. 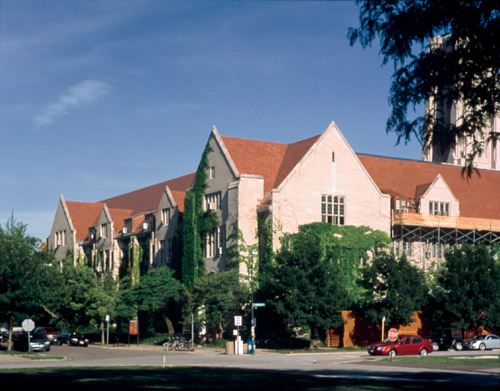 The Oriental Institute is a museum and research organization that focuses on the ancient Near East. The institute's building was built in 1931 and houses galleries; artifact storage and museum archive sections; a conservation laboratory; archaeological study areas; space for seminars, docent events and public programs; and professors' offices. Since 1996, the building has been under construction for renovation and expansion projects, but it was occupied during the work. In 1999, the building's roof system began to leak into the museum's reading room and other areas. Upon inspection by NRCA member INSPEC Inc., Milwaukee, it was discovered that the problem wasn't the existing clay tile roof system. Instead, it was determined the 3 1/2-inch- (87.5-mm-) thick concrete deck, which was bowing, was the source of the leaks. 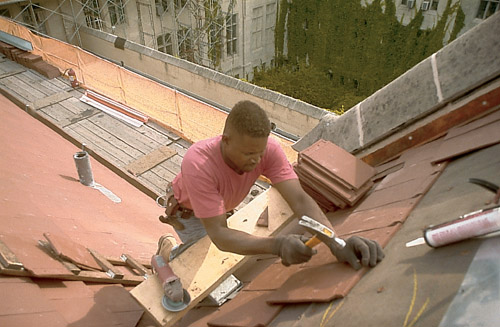 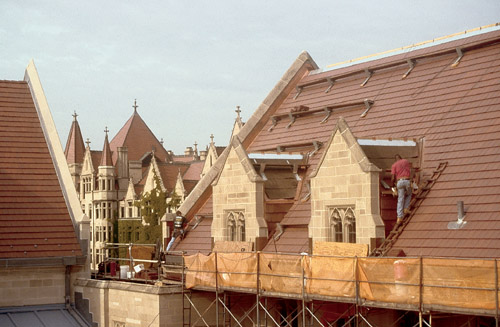 "This is the first building on campus that ever had to have its complete roof assembly removed and replaced," says Barry O'Quinn, supervisor of sheet-metal, roofing, masonry and recycling facility services at The University of Chicago. "Removing all the prestressed concrete panels and installing a new metal deck for the clay tile roof assembly on a building that houses irreplaceable artifacts is not your everyday project."

Completing this job meant roofing crews would have to stay out of the way of museum patrons, students, professors and researchers—the Oriental Institute could not close during roof system replacement work because of financial considerations. And crew members were happy to oblige.

"The museum staff and University of Chicago personnel hardly were aware of our presence," says Chris Cronin, president of Knickerbocker Roofing and Paving. "Many people commented about how unobtrusive such a large-scale project was to them."

The 10- to 12-person roofing crew also would have to take extra safety precautions and, obviously, could not damage the institute's collection of artifacts dating back to 6800 B.C.

The Oriental Institute was founded in 1919 as part of The University of Chicago and headed by Henry Breasted, the first American to receive a Ph.D. in Egyptology. Breasted wanted to establish an institute that would trace ancient people's progress toward civilization—before Greek and Roman civilizations thrived. John D. Rockefeller Jr. supported Breasted's vision and funded the start of the institute.

Since its establishment, the institute has sponsored archeological and survey expeditions in every Near East country to document and study the areas' languages, histories and cultures. Today, the Oriental Institute has field projects occurring in Egypt, Iraq, Israel, Jordan and Syria. The institute also conducts research projects in Chicago, such as developing dictionaries and lexicons of ancient Akkadian, Hittite, Demotic, Egyptian and Sumerian.

The institute's collection consists of 110,000 registered objects, 165,000 photographs, and 250 cubic feet (7.5 m³) of documents and other archival material. To house the collection, the institute has been under renovation since 1996 to build a new wing, storage facility and three new galleries; the work is expected to be completed by this fall. The Joseph and Mary Grimshaw Egyptian Gallery and Persian Gallery, which were closed while being renovated, reopened during 1999 and 2000, respectively. Three additional galleries will open at the museum and feature objects from Israel and Palestine, Syria and Anatolia, and Mesopotamia and Nubia.

The Persian Gallery features objects from 6800 B.C. to 1000 A.D. from modern Iran. In its exhibit are objects from the Persepolis ruins (a city that thrived from 520 B.C. to 331 B.C. and was destroyed by Alexander the Great), glazed ceramics from the early Islamic period, and evidence of administrative practices and record-keeping systems from Chogha Mish, Iran.

"The Persian Empire was remarkable," says Matthew Stopler, a John A. Wilson professor of Oriental studies and an expert on Persia. "It stretched virtually over a continent from Greece to Afghanistan and from Egypt to Libya to western India."

The Egyptian gallery features objects from the Predynastic Period (5000 B.C.) to the Arab conquest in the seventh century. The gallery includes 800 objects, such as a 7 1/3-foot- (2.2-m-) tall statue of King Tutankhamen found in Medinet Habu in 1931.

Roofing work began on the Oriental Institute in June 2000 and ended in August 2001. Because of weather conditions, work stopped from December 2000 through February 2001.

Before crews could begin the tear-off process, safety precautions had to be taken. According to Cronin, the entire building was surrounded with scaffolding and a safety net was assembled in the attic. The safety net was erected not only to protect workers but also the institute's library ceiling, which is made of hand-painted plaster. Unfortunately, this delicate area was the site of pre-existing leaks.

"Typically, we took off 6 squares (54 m²) a day," Cronin says. "The tile and underlayment came off fairly easily, and we used a crane to pull off the concrete slabs."

Because the museum still was open and university traffic swarmed around the building, crew members were confined to a restricted work area and roof access. In addition, they had to protect a landmark—and rather unique—university tree that partially grew perpendicular to the ground. The tree has become a symbol for university alumni; those who return to campus often have their pictures taken sitting on it.

Next, one layer of 5/8-inch- (15.6-mm-) thick Dens-Deck® and one layer of 3/4-inch- (18.8-mm-) thick plywood were mechanically attached. Then, one ply of self-adhering Grace Ice and Water Shield was installed followed by two plies of No. 30 asphalt felt that was secured by 1-inch (25-mm) diameter head disk nails. Finally, interlocking Ludowici Classic™ Tiles in Clay Red were laid in place. 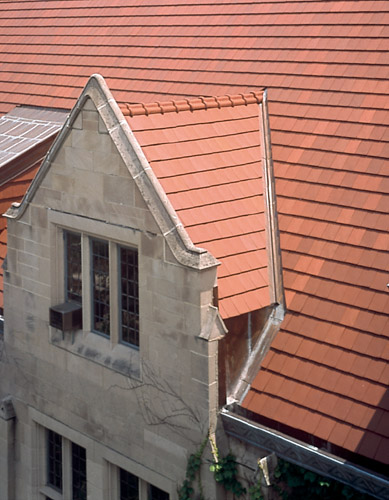 Once the roof system was installed, new steel angle gutter supports and dimensional wood blocking that was tapered to provide a 1/16-in-12 (0.3-degree) slope were installed. Then, lead-coated fascia, caps, gutters and flashings were installed at the eaves.

Additional plies of self-adhering underlayment were installed at the vertical transitions as an additional membrane flashing to the metal flashing. To finish the drainage system, new 4-inch (100-mm) diameter copper pipes were sealed into existing cast-iron drain leaders with liquid hot lead and soldered into new gutters. At the end of each day, completed work was made watertight with temporary tie-ins.

The Oriental Institute had a unique idea for raising additional money during tile roof replacement work. The institute allowed 250 of the new 15,000 clay roof tiles to be inscribed with a message to the ancient gods written in ancient languages, such as Babylonian.

Oriental Institute faculty, friends and university staff could write a personal message, such as "Anna wants the gods to heal her back," as one inscriber wrote. Others could choose from three suggested ancient blessings, such as "Come, O Storm God of Nerik, bring down from heaven your gentle rain!" The message was written in Hittite. All messages were written on the face-down side of the panels so they do not affect the roof's aesthetics.

Tim Cashing, director of development for the Oriental Institute, told the Chicago Tribune, "The exact placement of the tiles will remain a mystery known only to the [roofing workers] and, perhaps, the ancient deities invoked in the blessings."

The Oriental Institute building also consists of low-slope roof areas. After materials on the areas were removed to the roof deck, a new insulation system was installed. The system consists of a base layer of 1 1/2-inch- (37.5-mm-) thick polyisocyanurate and 5/8-inch- (15.6-mm-) thick Dens-Deck, which was taped at the seams. The insulation and Dens-Deck were set in Insta-Stik low-rise foam adhesive. To accommodate the system, new dimensional wood blocks were added to the roof areas' perimeter edges.

The new two-ply Stress Ply E membrane was set in Weather King cold-applied asphalt. The asphalt was allowed to flash off before the membrane was rolled in place. Next, a modified aggregate cap sheet was installed.

Some areas of the low-slope roof systems were small (about 200 square feet [18 m²]) and difficult to access, and the roof system designer was concerned about asphalt displacement from foot traffic in these areas. To eliminate this concern, the two-ply membrane, cap sheet, base flashings and aggregate surfacing were not installed on the same day.

Staying on schedule is an important part of every project. But Knickerbocker Roofing and Paving had to finish its work before some tombs came rolling into town. An exhibit, Treasures from the Royal Tombs of Ur, took place at the institute during October 2001. Because roofing work was completed on time, the Mesopotamian artifacts could be prominently displayed in their new temperature-controlled and leak-proof home.

"I know it sounds as if they paid me to say this, but the reality is that for this project to have been completed on [The University of Chicago's] campus and for me to only have [received] minor complaints in the project's two-year time period is a miracle in itself," O'Quinn says. "[The project] could not have gone better and has become the blueprint for how other major roof assemblies will be replaced on campus."

Looking back on the project, Cronin is proud of his company's work.

"The level of pride experienced by everyone involved in this project from our roofing and sheet-metal workers to our support and office personnel [is rewarding]," Cronin says.

But Cronin and Knickerbocker Roofing and Paving's personnel acknowledge that the job was successful because they received full cooperation from everyone involved.

"The extent of cooperation among the building owner, architect/engineer and our employees made this project unique," Cronin adds.