Since the early 1970s, asphalt shingles' wind resistances have been tested according to a fan-induced wind test method described in ASTM D3161, "Standard Test Method for Wind-Resistance of Asphalt Shingles (Fan-Induced Method)." With this test method, asphalt shingle products are classified as Class A, D or F, which represent maximum test velocities of 60 mph, 90 mph or 110 mph, respectively. 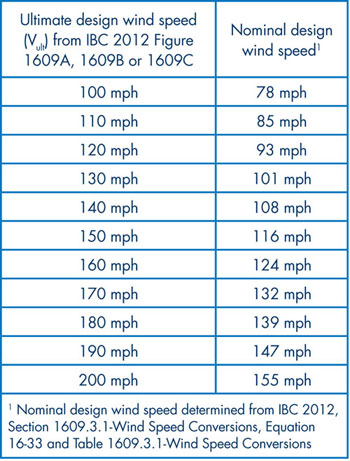 When using ASTM D3161 or UL 997, designers should select an asphalt shingle product with a wind-resistance classification that exceeds the basic wind speed required by the applicable building code. This basic wind speed value, sometimes referred to as nominal design wind speed, is designated as Vasd.

With the publication of ASCE 7-10, "Minimum Design Loads for Buildings and Other Structures," the basic wind speed map from ASCE 7's previous editions has been replaced with three new maps with ultimate design wind speed (Vult) values instead of the Vasd value in previous editions. The new Vult values are somewhat higher than the Vasd values. For example, a Vasd of 90 mph previously applied to most of the continental U.S. Using ASCE 7-10, a Vult of 115 mph now applies to Occupancy Category II buildings for most of the same region.

ASCE 7-10 and its revised maps are incorporated in the International Building Code, 2012 Edition. As a result, Vult now serves as the basis for wind load determination, which includes the required wind-resistance classifications for asphalt shingles, in the jurisdictions where IBC 2012 applies.

A comparison of Vasd values applicable to specific Vult values is provided in the figure.

Designers should specify the wind resistances of asphalt shingle products after taking into consideration the wind speed map contained in the applicable code.