Ballasted EPDM roof systems have been a sustainable option for decades

What is ballasted EPDM?

A ballasted EPDM roof system has its components held in place by river-washed stones or pavers. Ballasted roofs are loose-laid, meaning roofing materials, including the insulation and roof membrane, are not fastened to one another or to the roof deck. Adjoining EPDM sheets are spliced together, and the membrane and insulation are held down with a minimum of 10 pounds of ballast per square foot. This system has been popular because of its low life cycle cost and quick, economical installation, which is one of the fastest and most cost-effective ways to achieve a weatherproof building envelope. When the system first was introduced, 45-mil-thick EPDM was common. More recently, there has been a trend to using more puncture-resistant 60-mil- and 90-mil-thick EPDM membranes.

In addition to being functional and economical, ballasted EPDM roof systems are one of the most sustainable and environmentally friendly commercial roof systems. One reason for this is the long service lives of these roofs. Empirical evidence consistently has demonstrated EPDM membranes used in ballasted systems often outperform their expected lengths of service.

A 2003 study commissioned by the EPDM Roofing Association (ERA) selected 33 EPDM membranes, aged between 16 and 26 years, from in-service roofs in nine states. The samples included 10 ballasted EPDM roofs, and the study found that of these, the membranes' tensile strength, tear resistance and ultimate elongation were relatively unchanged after 23 years of service. 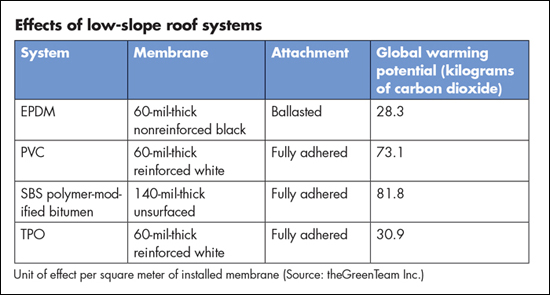 A recent life cycle assessment (LCA) shows EPDM's long-term environmental impact is much less than other alternatives. An LCA examines the environmental aspects and potential effects of a product, process or service. The EPDM LCA was commissioned by ERA and performed by theGreenTeam Inc., a strategic environmental consulting firm based in Tulsa, Okla. The LCA, using the Environmental Protection Agency's (EPA's) Tool for the Reduction and Assessment of Chemical and Other Environmental Impacts model, took into account all inputs associated with the manufacture and installation of assorted commercial roof systems, including EPDM, PVC, SBS polymer-modified bitumen and TPO.

When the LCA was completed, theGreenTeam's data was submitted to the Athena Sustainable Materials Institute to be entered into its EcoCalculator, the industry standard for LCA data relating to construction materials. It showed EPDM roof systems have less of an environmental impact than PVC, SBS polymer-modified bitumen and TPO roof systems. For a standard low-slope commercial roof over R-20 insulation and a steel deck, the EcoCalculator determined EPDM presents the least global warming potential, acid rain impact and smog impact.

Ballasted systems are cost-effective because of the minimal amount of components and quick, simple installation process. There is significantly less material, labor and energy used to install a ballasted system than other commercial roof systems.

EPDM roof membranes are protected from the elements by ballast material. EPDM roof assemblies are designed to offer outstanding protection against UV exposure, hail damage and extreme temperature fluctuations. Ballasted systems offer reliable wind-uplift resistance, which can be enhanced by simply using larger and heavier ballast around perimeters. In addition to protecting a roof from weather, ballast acts as a shield against flying debris and falling objects.

Architect Craig Tyler states: “A ballasted EPDM roof is ideal for high-abuse areas, such as schools or recreation centers, where vandalism is a concern. Objects thrown onto the roof will hit the ballast and not the roof membrane.”

Ballast also offers excellent fire protection; Class A fire resistance is possible without the need for a gypsum cover board or the addition of fire-retardant raw materials to the EPDM rubber.

Traditionally, a cool roof has been defined as one that uses a light-colored, reflective membrane or coating. In some large cities, government officials have implemented legislation that requires all new commercial buildings to have white roofs. As a result, many people ignore the value of a ballasted system as a cool roof alternative. However, because ballasted assemblies provide many of the same energy benefits as a reflective roof, they are recognized as a cool roof alternative by ASHRAE Inc., California Energy Commission's Title 24 and the Municipal Code of Chicago for the Building Industry.

Ballasted EPDM roofs can offer building owners the best of both worlds. In addition to helping keep buildings cool, they can mitigate the heating cost disadvantage of using a reflective membrane in northern climates where heating costs typically are five times that of cooling costs. Regardless of climate, ballast acts as an additional insulation layer, which helps minimize solar heat gain during summer and heat loss during winter.

Additionally, ballasted systems require minimal upkeep. Unlike reflective membranes that must be cleaned periodically or coatings that need to be reapplied regularly, ballasted systems don't require maintenance to retain their cooling properties. In fact, after two years of weathering, certain ballast and paver systems feature lower peak temperatures than white membrane systems. This is because reflective membranes lose their reflectivity as they are exposed to pollutants.

Ballast keeps membrane surface temperatures in the 90 F to 103 F range, similar to highly reflective roof membranes' temperatures, without the concerns of condensation, reflected heat or glare that can affect rooftop HVAC equipment or nearby windows.

Stormwater management is a growing concern among building owners, particularly in large cities where stormwater and sewer systems are combined and sometimes unable to handle heavy rainfalls. In many U.S. communities, a substantial rainstorm can overwhelm the combined system, causing raw sewage to be discharged into area waterways.

In these settings, traditional ballasted systems can be modified to absorb and retain stormwater. The modification is achieved by adding more drainage components, specifically drainage board or moisture-retention mats. This alteration to a traditional ballasted assembly can allow the system to retain as much as 70 percent of the water from a 24-hour rain event, providing significant relief to city sewer systems. However, it can add weight to the roof system.

When fully saturated, a stormwater retention system can add between 2 to 3 pounds per square foot. Modifying a ballasted roof system offers owners and developers a cost-effective alternative to expensive collection basins and associated land requirements.

The benefits of a ballasted roof assembly don't cease when a ballasted EPDM roof has reached the end of its useful service life. Often, when a ballasted system needs to be replaced, it is supplanted with another ballasted system. Ballasted roof systems are some of the easiest to retrofit because existing components, including the ballast and insulation, often can be reused in a new roof. This high degree of sustainability benefits the environment and helps reduce material and labor costs.

Additionally, because of liability issues, building owners often completely tear off an existing roof system for retrofit projects. However, this is not always necessary with ballasted roofs. Thermography can be used to ascertain whether moisture has entered existing insulation, which is a deciding factor when determining whether it can be reused.

If it's determined a roof system requires a complete replacement, disposal costs can be extraordinarily high. For larger projects, expenses can reach into the hundreds of thousands of dollars. EPA states 40 percent of total landfill waste comes from construction and demolition debris, and one quarter of that debris is composed of roofing materials.

Similar to any roof system, ballasted roofs have limitations and are not ideal for every building. First, ballast material is heavy, adding between 10 and 25 pounds per square foot to a building's load. Ballasted systems demand roof structures that can support the extra weight. Managing the heavy ballast also can be an issue. For instance, for inspection or repair, stone or pavers must be moved one small section at a time so the shifting weight does not result in roof deformation or structural damage to the building.

Finding leaks requires expertise and experience, and ballast makes a visual inspection difficult. The use of 60-mil- or 90-mil-thick EPDM membranes with factory-applied seam tape is an effective design enhancement to minimize the chance of leaks. When analyzing 30 years' worth of warranty claim data from Carlisle, Pa.-based Carlisle SynTec Inc.'s warranty department, it has been noted ballasted EPDM roofs have the lowest warranty claim rates per square foot based on the infrequency of problems and system design.

Finally, ballasted systems are not ideal for tall buildings or in hurricane-prone regions where ballast can become flying debris in tornado or hurricane events.

Although ballasted EPDM roofs were introduced before the focus on environmentally efficient and sustainable design, recent research has shown they are one of the most eco-friendly commercial roof systems on the market. When you choose to install a ballasted EPDM roof system, you can feel good about the economic value, proven track record and, most of all, your contribution to a healthier planet.