What we know now

The roofing industry has been installing roofing materials over structural concrete roof decks for more than a century. For most of this time, hot-applied built-up roofing was the predominate roof system installed over concrete roof decks, and any insulation was almost always adhered in hot asphalt. Using an asphalt-based roof system provided a fairly robust roof system in terms of adhesion and watertight integrity; the mopped asphalt functioned as a relatively good vapor retarder. Because of the asphalt, BUR roofs resist moisture movement and typically remain adhered to the concrete even if moisture intrusion occurs.

The adhesives currently used, particularly in ribbon form, do not act as any form of a vapor retarder like asphalt once did. Further, previous research identified paper facers on polyisocyanurate insulation are highly susceptible to moisture-based failure. Combine these two factors with accelerated building construction schedules, and the industry has created a moisture minefield for roofing professionals who install roof systems over new concrete decks.

Concrete roof decks arrive at job sites in liquid form. The concrete mixture is made of coarse aggregates, fine aggregates, Portland Cement, admixtures and water. Once a concrete roof deck is poured, it typically is left exposed to the elements. The effects of weather will vary depending on geography, time of year, typical daily variations and job-site conditions. Regardless, a new concrete roof deck potentially will be exposed to rain, snow, dew and frost in varying amounts. Be aware that this situation is the same for precast concrete decks and precast concrete decks with a poured concrete topping.

This additional environmental moisture can cause the concrete to rewet. In simplest terms, the moisture from the construction environment and weather can be absorbed into the concrete slab. This rewetting can reset the dry down of the slab or even give it more free moisture than it originally held.

So a roofing professional must first contend with the water that arrived in the concrete and then any rewetting that occurs from construction or weather. Combined, these conditions make the dry down and, ultimately, the moisture content in a concrete slab difficult to assess regarding when it is appropriate to begin installing roofing materials. To further complicate the matter, the free moisture in a concrete slab typically is within the slab and is not readily visible from either the top side or bottom side of the slab.

With increasing frequency, roofing contractors have been installing roofing materials over new concrete roof decks that are presumed to be dry by their crews, a general contractor or another party. They come to this conclusion simply because a certain amount of time has passed since the concrete was poured or the concrete visibly appears dry, but, in fact, the slab may have significant free moisture inside.

What tends to happen is a roof system is installed without issue, but months or even years later one of the parties discovers the roof system has become moisture laden. Many times, this moisture is seen as a thin film of water on the surface of the concrete under the roof system. Numerous exchanges of angry letters, insurance claims, warranty claims and lawsuits have resulted from free moisture in concrete slabs intruding into roof systems. Some of the larger claims for damages are for millions of dollars.

In response to this issue, the roofing industry and other organizations provided financial and material support to my company for an in-depth study to better understand moisture in concrete roof decks and provide the industry with data-driven information to help avoid future problems.

In addition to the full-scale slabs, numerous smaller slabs were cast for exposure outdoors with matching companions inside the laboratory. These smaller slabs were small enough to be moved for weekly weighing. All slabs were subjected to drilled-in moisture probes (per ASTM F2170, “Standard Test Method for Determining Relative Humidity in Concrete Floor Slabs Using in situ Probes”), massing and electronic moisture meters (per ASTM D4263, “Standard Test Method for Indicating Moisture in Concrete by the Plastic Sheet Method”). 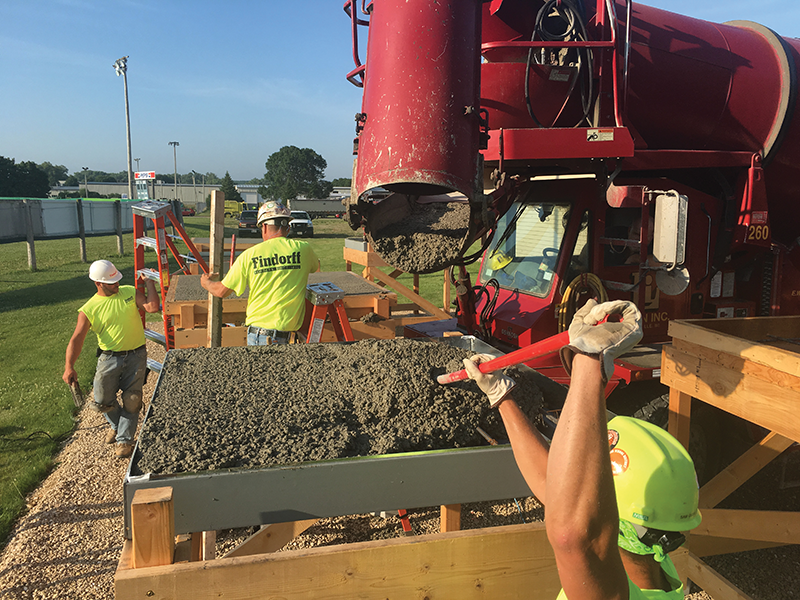 Photo 1 shows the outdoor slabs being poured. These slabs were scheduled for 16 weeks of exposure starting in summer. They were tracked into the fall. During this time, any concrete slab that would begin to dry down would return to a full-scale reading following a rain event.

In addition to the work done with actual concrete slabs, a computer modeling program was used in Phase 1. This hygrothermal modeling program can simulate the movement of heat and moisture through construction materials, including a roof.

However, the data for the specific concrete in use was not readily available. For this reason, samples of the concrete were prepared and sent to another laboratory for hygrothermal characterization. The concrete samples were tested at 28 days and 60 days. The hygrothermal work proved to be insightful and numerically demonstrated what was observed in the field experiment portion. 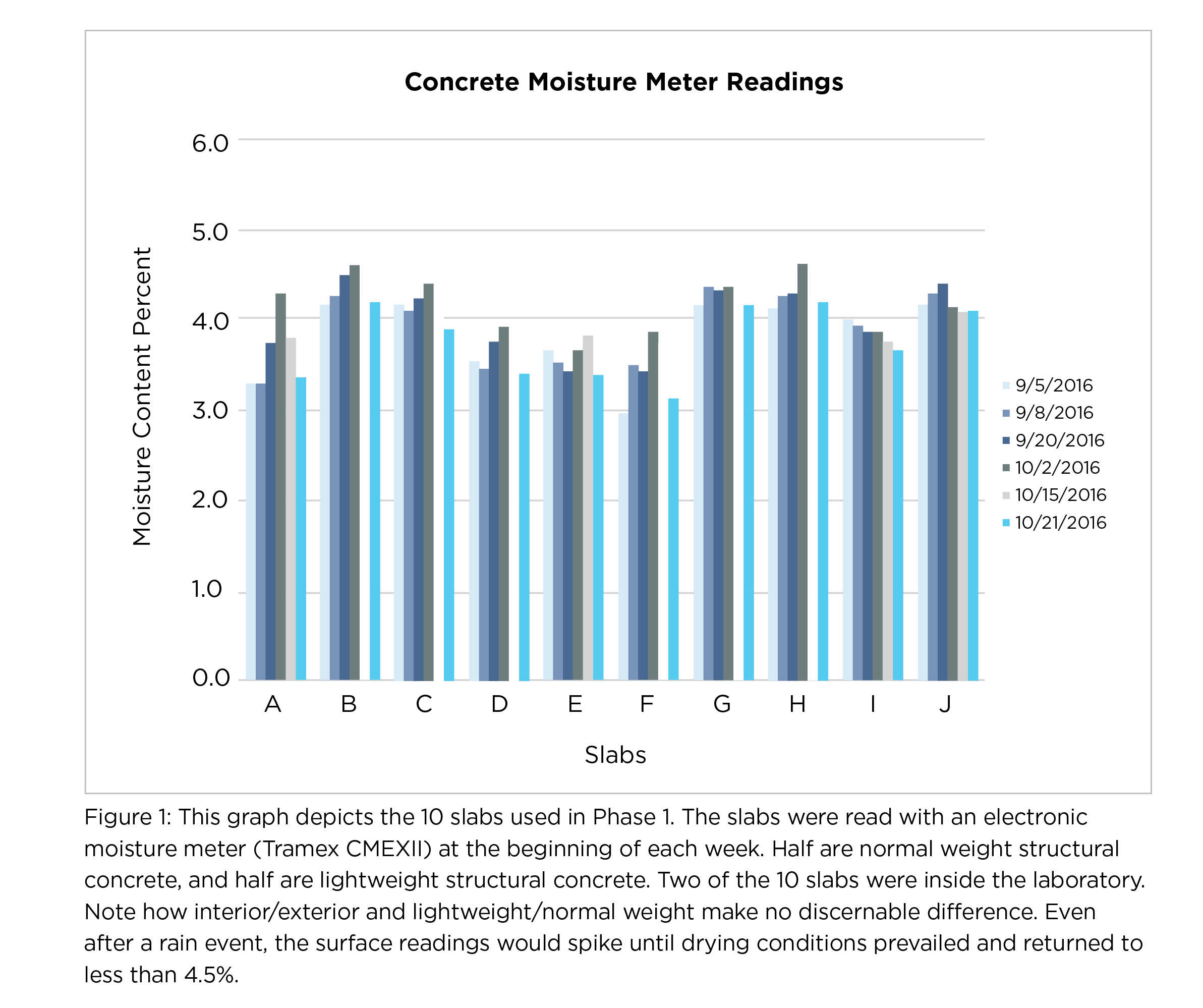 The results of Phase 1 included the following findings:

Based on the results of the hygrothermal work in Phase 1, numerous discussions with funding partners led to a consensus: The next phase of work would be to validate the hygrothermal model against full-scale roofs and then use the validated model to simulate roof systems installed over new concrete decks throughout North America.

Anytime you do research work with a computer model, even a commercially available one that has been validated in other applications, it is imperative for the credibility of the results that the model be validated for the specific application you are researching. In this case, this was a roof system installed over a new concrete roof deck. As such, great effort was made to validate the computer model against actual measured data.

Concrete roof slabs similar to the Phase 1 slabs were prepared by the same general contractor using the same concrete design mixtures. The design mixes were from a regional concrete supplier. The supplier provided its most commonly supplied normal weight and lightweight structural concrete mixes to commercial construction sites for the local batch plant. In all, 10 concrete slabs were created. Half the slabs were normal weight concrete, and half were lightweight structural concrete. Further, half the slabs were cast over steel form deck, and half were cast using strippable forms. Note that these are two different drying conditions. Once the forms are stripped away, moisture can exit the slab from the top and bottom; with steel form decks, moisture can only exit from the top. The slabs were all cast inside the laboratory and allowed to cure for 28 days.

Note the 28-day period for concrete is a historical value related to the chemical process that helps concrete gain the strength required by structural engineers. It has nothing to do with moisture content. Photo 2: A view of the SBS polymer-modified bitumen base sheet being torched to a primed concrete deck during the roof system installation

On day 28, half the concrete slabs received an SBS polymer-modified bitumen sanded base sheet as a vapor retarder installed directly on the concrete deck (see Photo 2). The concrete deck was primed with a solvent-based primer that complied with ASTM D41, “Standard Specification for Asphalt Primer Used in Roofing, Dampproofing, and Waterproofing,” and the base sheet was torched to the concrete deck.

Then all slabs were roofed using two staggered layers of paper-faced polyisocyanurate adhered in foam ribbons. A 60-mil-thick TPO membrane was installed by directly adhering it to the polyisocyanurate. In all, there were eight experimental slabs. The remaining two slabs, one normal weight and one lightweight structural concrete, were cast on load cells where the moisture loss (dry down) was determined by weight loss over time.

While the roof systems were assembled, miniature hygrometers (which measure temperature and relative humidity) were placed at selected points in the roof assembly’s cross section. Photo 3 shows the first layer of insulation and two hygrometers in place. All the instruments were connected to a central computer to collect and store the data. 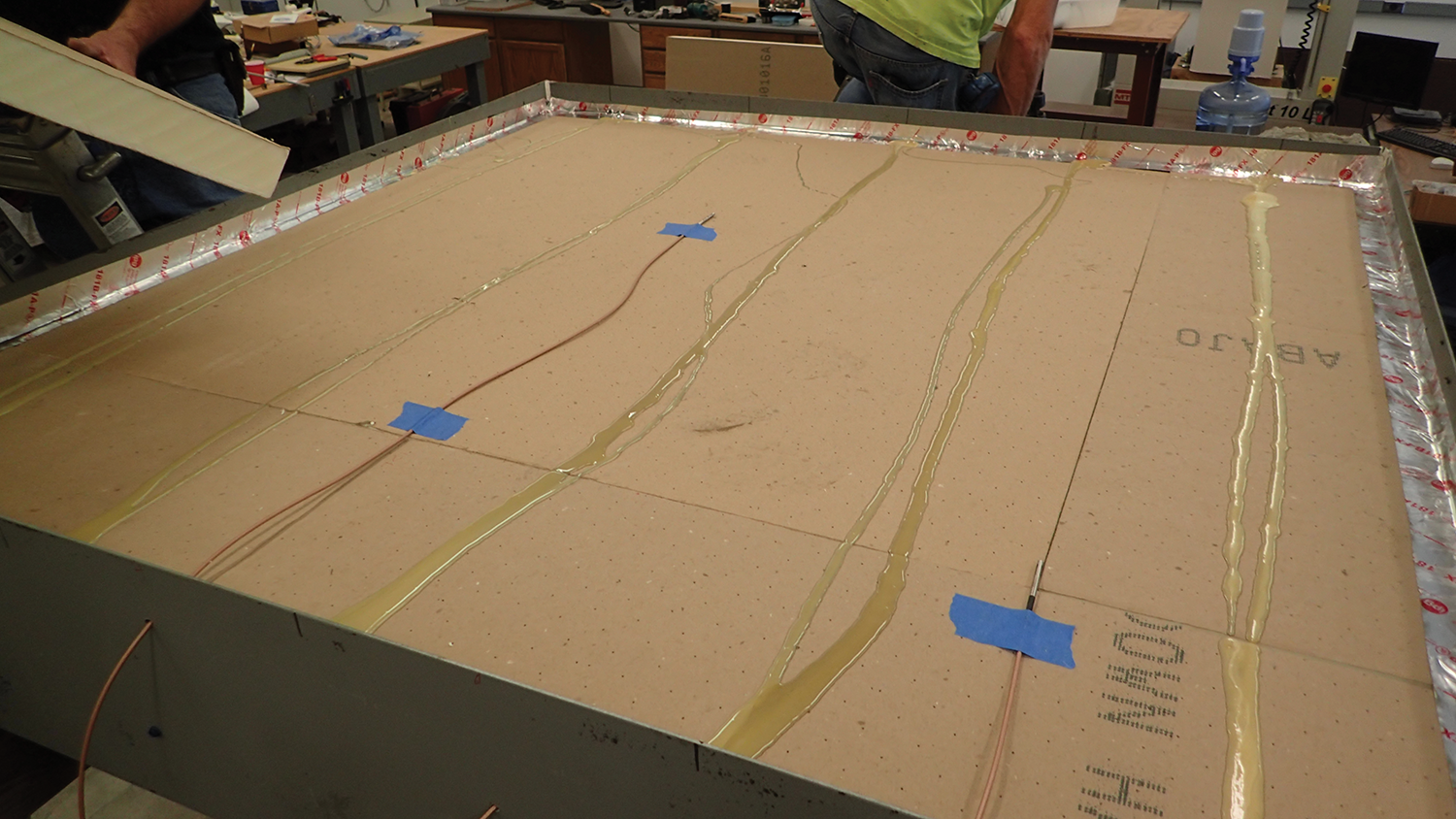 Photo 3: A view of the Phase 2 roof systems being installed over the concrete decks after 28 days. The insulation system was planned for staggered joints and installation placement of the instruments. The ribbon adhesive can be seen rising and blue tape holding the matchstick-sized temperature and humidity sensors in place.

Once the roof systems were assembled, they were left alone so we could monitor the moisture’s movement. With the roof system’s temperature being a constant 70 F (the laboratory temperature) throughout the testing period, there would be little driving force for moisture to move. An in-service roof system can see a temperature differential of much more than 100 F between indoor and outdoor temperatures. To simulate this inside-to-outside temperature differential in the laboratory, a regulated and heated environment of 90 F was created below the roof system specimens. This 20-degree differential above and below the roof created a vapor drive from under the slab to the roof membrane and was held constant. The experiment ran for a year. As with Phase 1, the concrete was hygrothermally characterized, which was the same concrete mix. However, in this case, the concrete samples were cut from a larger block just before testing. It was hypothesized this type of sampling would help avoid edge effects and better represent the concrete within the slab versus just the surface.

When the newest hygrothermal data was entered and modeled against the data collected with the laboratory data, the agreement was exceptionally accurate. Therefore, the model was deemed validated for this application and the final research portion could begin using the model to predict performance in various climates. 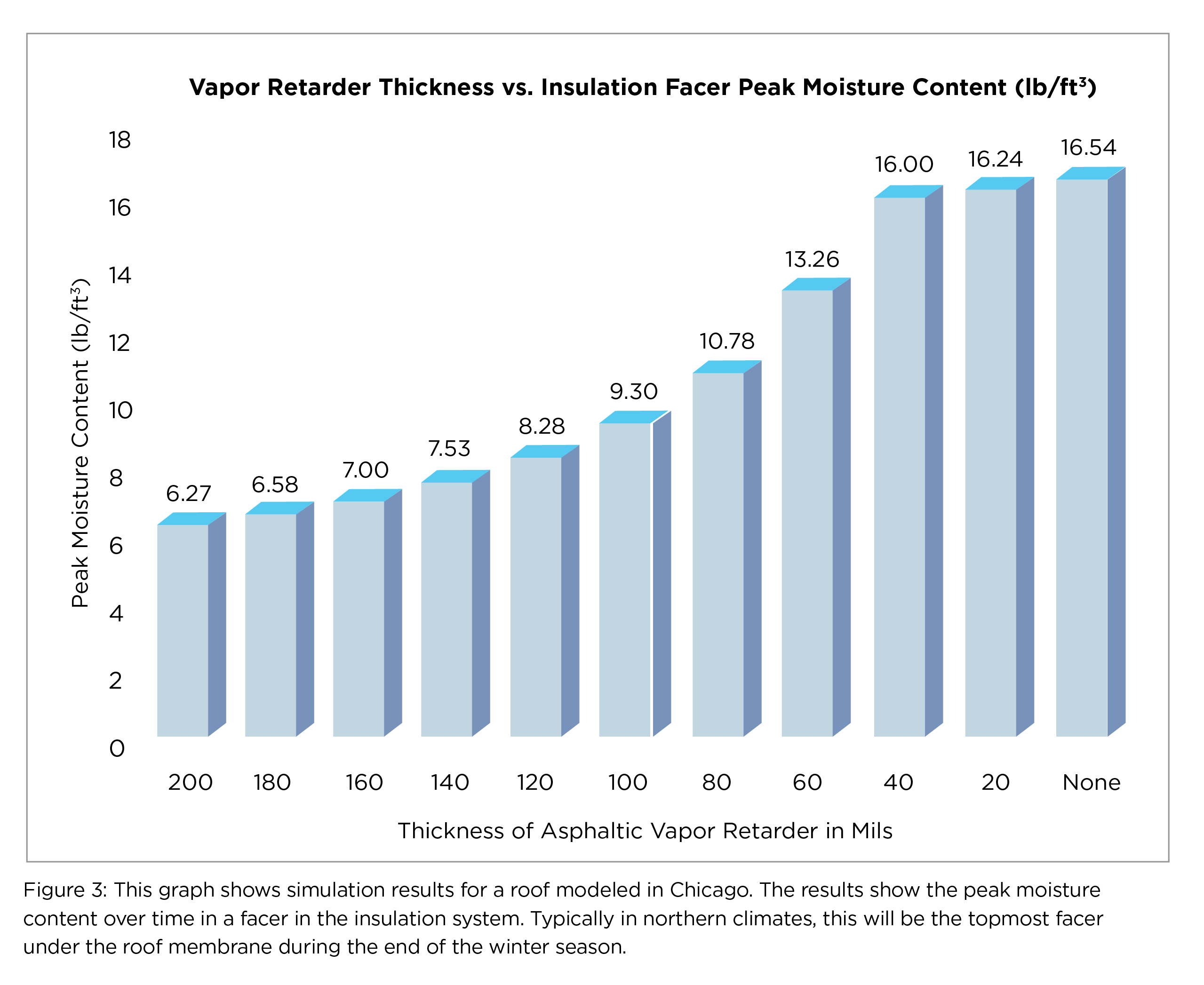 Thousands of simulations were conducted to look at the variables of structural concrete type, use of a vapor retarder, use of forms versus steel form deck, month of installation and ASHRAE climate zone. All roof systems were identical to those experimented within the laboratory. The critical analysis point was the moisture content of the paper facer on the polyisocyanurate insulation. Previous research has shown these facers become significantly weakened above 12% moisture content by weight. In numerous field failure investigations of roof systems over new concrete roof decks, the weakened insulation facer was the primary symptom and source of complaints. Therefore, the moisture content of these facers was the focus of these modeling runs.

An example of the type of data that can be generated from hygrothermal modeling is shown in Figure 3. In this figure, a hypothetical roof system using paper-faced polyisocyanurate is modeled for installation in Chicago. In each successive simulation, the vapor retarder used is made thinner and thinner until no vapor retarder is used. Recall that a moisture content above 12% is detrimental for cohesion within the paper facer.

The results of Phase 2 were as follows:

Based on the laboratory and modeling research, the following general conclusions can be made by the researchers about new concrete roof decks:

A full report will be available from research funding partners, such as the Roofing Alliance. There is sufficient information for an experienced hygrothermal modeler to create his or her own concrete materials in the program and model specific roof systems for performance. Any new technical guidance or installation instructions on roofing over new concrete decks should come from manufacturers and industry associations.


For an article related to this topic, see “The quest for dryness.”