The 2012 I-codes will affect roofing practices

Earlier this year, the International Code Council (ICC) updated its model codes, commonly referred to as I-codes. ICC intends for the latest edition of the I-codes to be adopted by jurisdictions beginning in 2012. Because these new editions contain numerous roofing-related changes, you should pay close attention to the 2012 I-codes.

Currently, the I-codes consist of 13 model codes addressing a variety of regulatory topics. Most roofing professionals are most familiar with ICC's International Building Code (IBC), International Residential Code for One- and Two-Family Dwellings (IRC), and International Energy Conservation Code (IECC), which address most buildings and structures, one- and two-family residential buildings, and buildings' minimum thermal insulation requirements, respectively. Other I-codes address topics such as fire prevention, plumbing, mechanical systems and building site zoning.

In Section 1503.6—Crickets and Saddles, an exception has been added that exempts unit skylights from requiring crickets or saddles. Previously, IBC 2009 required crickets or saddles for all roof system penetrations 30 inches or wider, including unit skylights. Unit skylights need to be tested and labeled according to AAMA/WDMA/CSA 101/I.S./A440, "North American Fenestration Standard/Specifications for Windows, Doors and Skylights."

For steep-slope roof system underlayment, special attachment requirements have been added for high-wind regions. For regions where the nominal design wind speed is greater than 110 mph, corrosion-resistant fasteners shall be applied along the overlap at a maximum spacing of 36 inches on center. Where the nominal design wind speed is 120 mph or greater, underlayment shall have 4-inch minimum laps and be fastened in a 12-inch grid pattern between side laps and 6-inch spacing at laps using metal or plastic cap nails. An exception allows an adhered underlayment to be used in lieu of these special high-wind underlayment lap and attachment requirements.

Specific requirements for rooftop photovoltaic (PV) systems have been added to the roofing chapter of the 2012 IBC. Rack-mounted PV panels or PV systems that are adhered or attached to roof coverings need to be tested and labeled to have the same fire-resistance classification as Table 1505—Fire Classifications requires for the building's roof covering. Testing and labeling according to UL 1703, "Flat-Plate Photovoltaic Modules and Panels," also are required. Rack-mounted PV panels need to be designed for wind loads using the component and cladding approach of Chapter 16, which includes considering an effective wind area based upon the dimensions of a single PV unit frame. Roof-covering-integrated PV modules or shingles need to be wind-tested according to ASTM D3161, "Test Method for Wind Resistance of Asphalt Shingles (Fan Induced Method)."

Requirements for roof systems primarily are addressed in IRC's Chapter 9—Roof Assemblies. The roofing-related changes mentioned for IBC 2012 are incorporated into IRC 2012. The following additional revisions also are included.

In Section R903.2—Flashings, a kick-out flashing now is required for steep-slope roof systems to divert runoff water from where an eave intersects a vertical sidewall. When a metal kick-out flashing is used, it should be corrosion-resistant and at least 0.19 of an inch thick (26-gauge galvanized steel).

In IRC's 2006 and 2009 editions, a requirement was provided that prohibited re-covering roof systems with asphalt shingles in specific regions susceptible to hail damage. This restriction is removed from IRC 2012. 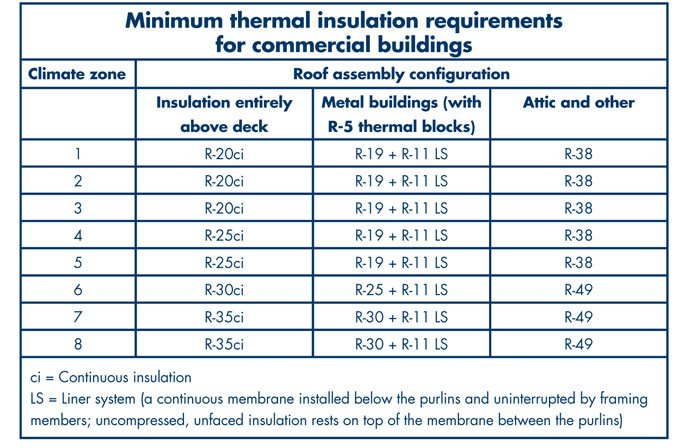 Also, in Section R402.2.3—Eave Baffle, vent baffles are required in vented attics to maintain ventilation openings equal to or greater than the sizes of the vents.

In the IFC, roofing-related requirements are in multiple locations.

A new subsection, Section 605.11—Solar Photovoltaic Power Systems, addresses ground-based and roof-mounted PV systems. PV systems need to comply with NFPA 70, "National Electric Code," and meet specific marking requirements. For roof-mounted PV systems, additional requirements for the location of DC conductors, rooftop access and pathways, and firefighters smoke ventilation procedures are provided. Generally, for steep-slope roof systems, a 3-foot-wide access pathway clear of any PV modules is required at side edges and ridges and an 18-inch-wide pathway is required along hips and valleys. For low-slope roof systems, generally a 4-foot-wide access pathway is required at the perimeter of PV arrays and no single array shall measure more than 150 feet by 150 feet without an additional pathway.

Compliance with and enforcement of the 2012 I-codes requirements for PV and vegetative roof systems likely will present unique challenges because the code requirements for these systems are spread among the IBC, IRC and IFC.

Also, a new requirement has been added in IFC's Section 105.7.14 indicating a construction permit is required to install or modify PV systems. This requirement does not specify whether the permit should be issued by the fire code official or building (or residential) code official; the local jurisdiction likely will make that decision. The inclusion of a model code permit requirement for PV systems is significant because it is one of the only places in the I-codes that requires construction permits.

With the publication of the 2012 I-codes, you should begin preparing for the new code's implementation. ICC intends for the latest edition of the I-codes to be adopted by jurisdictions beginning in 2012.

Because these new editions contain numerous roofing-related changes, be aware of the changes included in the 2012 I-codes and when the new code will be adopted. Code update and adoption timetables are determined by local authorities, typically municipal or state governments. I encourage you to contact the local authorities that have jurisdiction in the areas you work to learn of the specific codes and editions that are currently applicable and any plans or timetable the jurisdictions have for code updates.

On Thursday, Feb. 23, during the 2012 International Roofing Expo,® I will present an educational program where I will provide a more detailed explanation of the changes in the 2012 I-codes.