For many businesses, the time period during which a building component can be depreciated is a major factor in determining when the component is upgraded or replaced. The current federal tax code requires a roof system to be depreciated over 39 years, which means a building owner has little tax incentive to replace a poorly performing roof system before that time. As a result, building owners not only are putting off replacing their roof systems (causing a loss of business to the roofing industry), but roof systems that may not be as energy-efficient as new systems remain in place. (For more information about the current law, see "Depreciation limit," July issue, page 22.)

NRCA has been lobbying Congress to change the tax code as it relates to commercial roof systems, arguing that they do not typically last 39 years. To effectively lobby to change the law, the roofing industry needed to produce evidence regarding the expected life spans of commercial roof systems, as well as the concerns building owners have about replacing them. As a result, the National Roofing Foundation's Roofing Industry Alliance for Progress hired the market research firm Ducker Worldwide, Bloomfield Hills, Mich., to conduct a study that would show how long commercial roof systems should be expected to last and reveal building owners' perceptions about purchasing new roof systems under the current tax code.

It is important to note the study does not provide the following: variance and position analysis of the various materials used for low-slope roof systems; material recommendations; scientific-based testing for life-span determination; warranty assessment and calculations of life span based on warranty terms; statistically reliable samples of building owners in each key application segment; and historical analysis of year-to-year changes in roof systems. Following is a synopsis of the study.

Because the market for commercial roof systems is diverse and decisions about roof replacement are influenced by a variety of people, the study was designed to gather information from all the decision influencers.

The research company interviewed 523 people who were classified in one of the following groups: roofing contractors; architects, specifiers and consultants; building owners and facility managers; government agencies and testing laboratories; and manufacturers.

The research consisted of telephone interviews with select building owners, consultants and manufacturers. In addition, NRCA members were sent an online survey to complete regarding roof system longevity. It is important to note building owners and facility managers were prescreened to determine their levels of roofing knowledge. The building owners had buildings in all regions of the United States, and the ages of their roof systems varied.

To determine an appropriate estimation of roof system life span, Ducker Worldwide considered the following issues, which made up its roof longevity model: material type, material thickness, region, building category, maintenance practices, insulation amount and type, and industry perceptions of the material used. Each factor was considered to create the most realistic picture of how long an average roof system can be expected to last.

Interviewees were told the definition of "roof system life span" is the time period from the initial roof system installation through roof system re-cover or replacement. 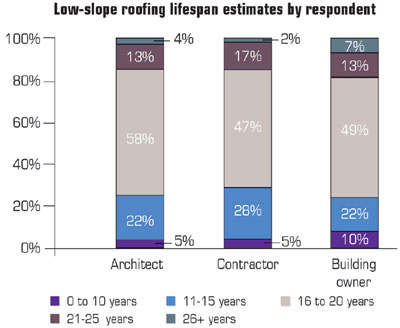 The chart shows how long roof systems are expected to last.

According to interviewees, a roof system's life span is determined by the following factors:

The building owners, architects and contractors surveyed agree installation quality, weather conditions and proper maintenance were the most relevant indicators of how long a roof system will last. In addition, the perceived longevity of a roof system is a critical factor in determining which roof system a building owner chooses.

In addition, the savings realized could be used to invest in better, more energy-efficient roofing materials to decrease overall energy consumption. Of those building owners surveyed, nearly half indicated when they reroof their buildings, they usually request the same type of roof system be installed—primarily because they lack the education to choose alternative roofing materials. But those interviewed report energy efficiency is important to them, and many indicate they had hired firms to provide energy audits, consultations and implementation procedures. Ninety percent of building owners sampled report they use more insulation (or other energy-saving methods) when they replace or re-cover existing roof systems.

More frequent reroofing also would decrease the reliance on extensive maintenance to prolong the life spans of failing roof systems. Several contractors, consultants and maintenance personnel interviewed state they have witnessed (and, in some cases, participated in) maintenance of roof systems long beyond what typically is accepted in the industry.

Of course, an upswing in reroofing projects would have ancillary benefits for the roofing industry in increased work and growth in employment. For example, according to Ducker Worldwide's calculations, if the depreciation schedule were reduced, the roofing industry could see an additional 250 million square feet to 300 million square feet (23 m² to 28 m²) of roofing material installations annually, as well as an increase in industry revenues of $1 billion per year. In addition, job growth for manufacturers, contractors and others would approach 40,000. (The company used figures from the U.S. Census Bureau, U.S. Department of Labor and NRCA to arrive at the projections.)

Changing the depreciation schedule would benefit roofing contractors, their clients and the U.S. economy. NRCA continued to push for a change in the current tax code and addressed the issue during its legislative conference Sept. 29-Oct. 3. On Sept. 30, Sen. Jim Bunning (R-Ky.) introduced the Realistic Roofing Tax Treatment Act of 2003, which would amend the Internal Revenue Code to provide a more realistic 20-year depreciation schedule for commercial roof systems. Rep. Mark Foley (R-Fla.) introduced companion legislation in the U.S. House of Representatives Oct. 15.

Ambika Puniani is editor of Professional Roofing and NRCA's director of communications.