Ray Bradbury's classic novel Fahrenheit 451 is a commentary about free speech and censorship. In the novel, 451 F is identified as the temperature at which books—or paper—will ignite and censorship of the written word will be achieved.

Although not about roofing, the novel introduces a fundamental concept that can be applied to the fire safety of torch-applied polymer-modified bitumen roof systems. For example, if during the application process the ignition temperatures of combustible substrate materials are not reached, the likelihood of fire is greatly diminished.

To test this concept as it applies to torch-applied polymer-modified bitumen roofing products, NRCA and Hughes Associates Inc., Baltimore, a nationally recognized fire consulting firm, devised a program to test whether commonly encountered combustible substrates will likely ignite during torching; the test revealed the minimum ignition temperature of such substrates is 570 F.

The test program consisted of torch applying polymer-modified bitumen membrane base flashing system configurations over an instrumented substrate. The temperature measurements obtained from the instrumentation then were compared with known ignition temperatures for combustible materials commonly used as roof substrates. 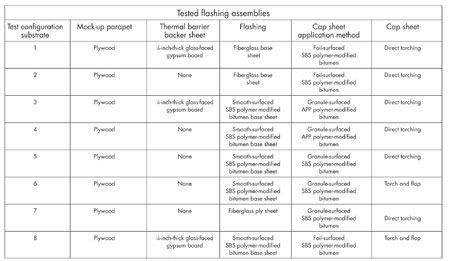 The specific flashing assemblies tested are identified in Figure 1. 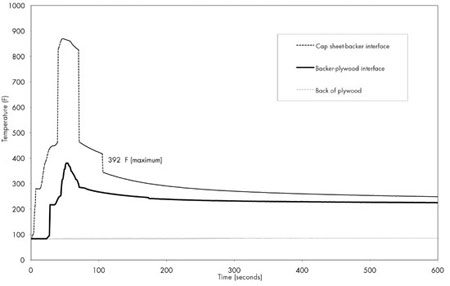 The maximum temperature achieved at the interface of the flashing backer sheet to the substrate (plywood or 1/4-inch-thick glass-faced gypsum board) was 392 F. This value was nearly consistent for each flashing configuration tested.

In each test, the temperatures at the backside of the plywood flashing substrate were found to remain at the ambient temperature throughout the test.

The cooling rates of the foil-surfaced membrane and granule-surfaced SBS polymer-modified bitumen membrane cap sheets were found to be more gradual than those using APP polymer-modified bitumen cap sheets. Also, the cooling rate of the 1/4-inch-thick glass-faced gypsum board was noticeably more gradual than the configurations without the gypsum board layer.

Finding a maximum temperature of 392 F between the flashing backer sheet and substrate is significant because this is also the temperature that could occur at the surface of combustible substrate materials. This value then can be compared with the ignition temperatures of commonly used combustible construction materials.

Based on this testing's favorable findings, NRCA is revising its guidelines for torch-applied membrane flashings using polymer-modified bitumen sheet products. NRCA's new guidelines will allow the use of direct torching over combustible substrates with specific stipulations.

Specifically, NRCA will recommend the use of direct torching of polymer-modified bitumen sheet product membrane flashings over plywood, oriented strand board, wood board or wood plank, and wood fiberboard flashing substrates using a single-burner, low-output (105,000 Btu or less) detail torch and where the substrate has been covered with an air-impermeable flashing backer with sealed laps. 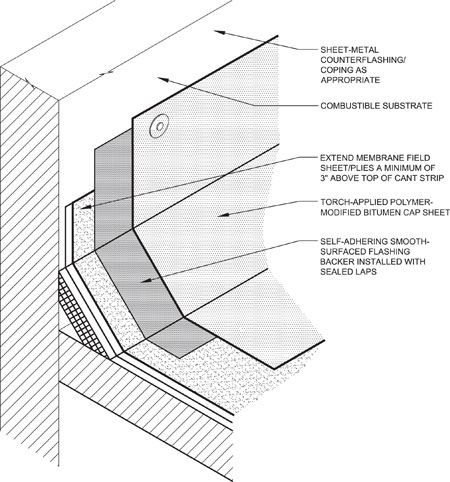 These changes also will be implemented in the NRCA/MRCA Certified Roofing Torch Applicator (CERTA) program.

When you encounter torch applications, I encourage you to consider these findings and implement the latest version of the NRCA/MRCA CERTA program.