For several years, the Canadian National Research Council's Institute for Research in Construction has been managing the Special Interest Group for Dynamic Evaluation of Roofing Systems (SIGDERS)—a consortium of manufacturers, building owners, trade associations and researchers. SIGDERS has helped advance the knowledge for the testing and design of mechanically attached flexible membrane roof assemblies in North America. These types of assemblies, composed of flexible sheets (the waterproofing component) and mechanical attachments to resist wind uplift, are used on more than 30 percent of North American low-slope buildings, according to NRCA's 2004 Project Pinpoint. What follows is an explanation of the SIGDERS test protocol and application recommendations based on the testing. The information is based on the paper "A Guide for the Wind Design of Mechanically Attached Flexible Membrane Roofs," co-authored by Tom Smith, president of TLSmith Consulting Inc., Rockton, Ill., and me.

Determining design wind loads is the first step in designing a roof assembly. Wind loads on buildings are determined in accordance with building codes or standards; in Canada, the National Building Code of Canada 2005 (NBC) is the model code. The reference dynamic pressure for roof covering loads is based on a mean recurrence interval of 50 years. In the U.S., ASCE 7-04 is used. The wind-load calculation procedure for roof coverings can be summarized in six steps:

A roof assembly's wind-uplift resistance is a function of the components used (membrane, seams, fasteners, deck) and their arrangement. Roofing materials manufacturers provide design resistance values for their systems based on uplift testing. It is critical these test methods offer a meaningful measure of a system's uplift performance. To satisfy industry demand for test methods that better simulate actual in-service conditions, SIGDERS developed a new test procedure, which does the following:

The SIGDERS dynamic testing protocol has five rating levels (A through E); each level consists of eight load sequences with different pressure ranges. Testing begins at level A; if a roof passes A, it advances to B and so on. Based on the SIGDERS test protocol, a national Canadian standard, CSA A 123.21, "Standard Test Method for the Dynamic Wind Uplift Resistance of Mechanically Attached Membrane Roofing Systems," was issued in 2004.

Before CSA A 123.21, there were two static test standards used in North America to assess wind-uplift performance of membrane roof systems (both were based on static testing): FM 4470, "Class I Roof Covers," and UL 580, "Tests for Uplift Resistance of Roof Assemblies."

For design purposes, the sustained resistance an assembly achieves in either static or dynamic testing must be reduced by a safety factor using one of the following equations:

Mechanically attached roof membranes respond to wind loading differently than other roof coverings. Wind-induced suction repeatedly lifts the membrane between the attachments and causes elongation and billowing (see Figure 1). This can lead to fatigue of the membrane, fasteners, substrate and fastener/deck connection. 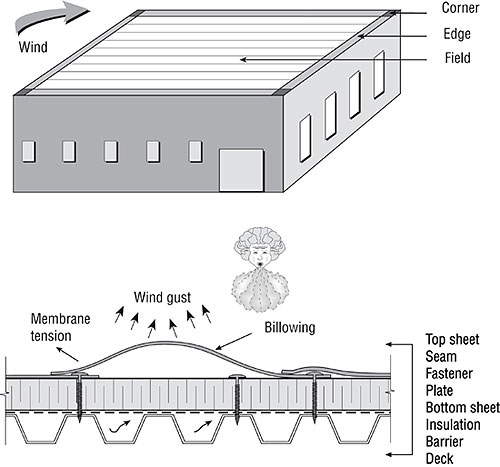 Figure 1: Wind effects on mechanically attached roof systems All figures courtesy of the Institute for Research in Construction

Roof system performance depends on component-to-component resistance to wind uplift. All resistance links must remain connected for a roof system to be durable and remain in place (see Figure 2). Failure occurs when the wind-uplift force is greater than the resistance of any one of the links between membrane, seam, insulation, retarder, plates, fasteners or deck. For example, roof system failure can be initiated when a fastener pulls out from a deck even though the membrane and its seams remain in good condition. In addition, failure can occur when a seam opens. Some recommendations for component application follow. 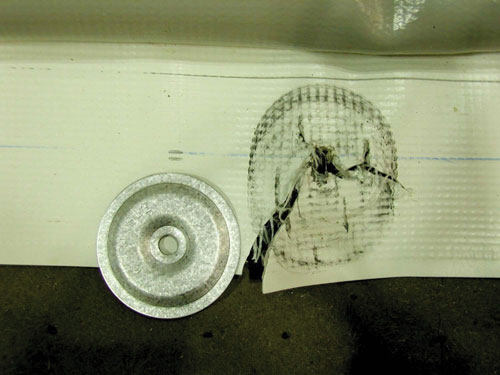 Figure 3: The membrane tear underneath the fastener plate was caused by a lack of clamping force.

There are two basic types of seams used for mechanically attached flexible membrane roofs. An asymmetrical seam is the most common arrangement for thermoplastic membranes (see Figure 4). Although such a seam can be designed successfully, wind loading causes greater stress to this type than to its symmetrical counterpart. 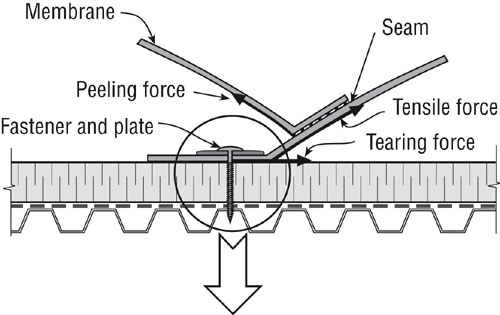 A symmetrical seam substantially reduces force eccentricity compared with asymmetrical designs because of a reduction of the forces attempting to overturn the fastener plate and rock the fastener shank as shown in Figure 5. 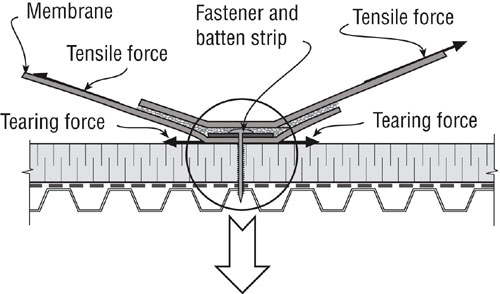 Fastener plates and batten bars maintain a clamping force on a membrane to deter tearing and slippage from under the plate. Fastener plates with barbs provide increased resistance to membrane slippage (see Figure 6). Some fastener plate designs provide resistance to "pop up," which occurs when insulation compresses or a fastener backs out and risks puncturing the membrane. If a plate is an anti-pop-up type, membrane puncture is unlikely, but plate compression still can occur, making a membrane susceptible to tearing at fastening points. 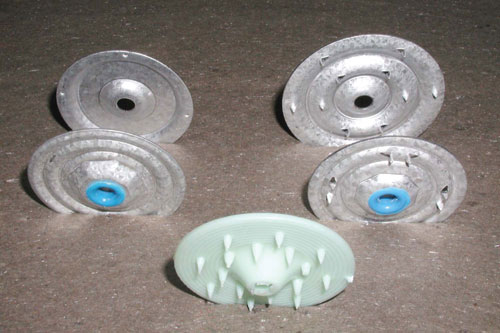 Batten bars distribute loads by providing a clamping force to deter membrane tearing and slippage. They need to be suitably robust to withstand repeated dynamic loading from high-wind events without deforming.

The membrane attachment method significantly influences a mechanically attached roof's wind-uplift performance with fastener thread designs playing a vital role in resistance. Anti-backout fasteners are recommended because of their thread design, which reduces the potential for backout. 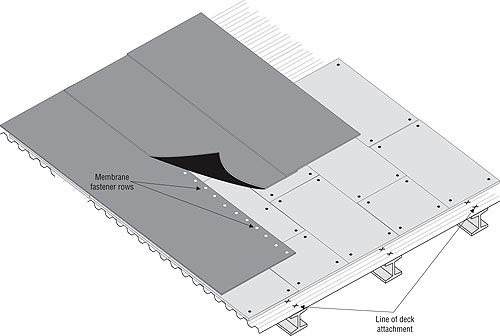 Figure 7: Influence area as a function of fastener row orientation—membrane fastener rows are perpendicular to the deck flanges

The control of heat movement through a roof system depends almost exclusively on the insulation, which also has an important role in a roof assembly's wind-uplift performance. Although many types of thermal insulating materials are available, polyisocyanurate insulation is used for a majority of mechanically attached flexible membrane roofs.

Thicker insulation requires a longer fastener shank. This can apply a greater rocking force; if this force is sufficient enough to crush the insulation, the rocking of the fastener results in a reduction of the plate's clamping force. The fastener's horizontal rocking movement is reduced when an air/vapor retarder is installed as part of the roof assembly because it distributes the load. When no retarder is used, insulation thickness has minimal effect on the wind-uplift ratings of mechanically attached systems.

Vapor retarders limit airflow into a roof system, which reduces energy losses in the assembly. They can reduce membrane flutter and should be used wherever moderate winds are frequent. Vapor retarders commonly are constructed with sheet materials, such as polyethylene. (A two-ply built-up sheet or one-ply modified bitumen sheet also can be used.) When sheet products are used, they are applied directly over the deck. The joints of polyethylene sheets are sealed with tape or sealant before insulation/cover boards are placed and mechanically fastened to the deck. This means the air retarder assembly (insulation boards, fasteners and other components above the vapor retarder) must be designed to resist 100 percent of the design uplift load (adjusted for safety factor).

Although air retarders have many benefits, they can make it more difficult to detect leaks. So a small opening in a roof membrane can go unnoticed for quite a while, resulting in a large area of wet roof insulation.

Decks and deck attachments are essential features of mechanically attached flexible membrane roof systems. Plywood, wood, plank, concrete or steel are used on roofs with flexible membranes. For roofs with high design uplift loads, a thicker deck and stronger fasteners or denser patterns should be specified to provide added resistance.

The deck attachment of the supporting structure must resist design uplift loads adjusted for the safety factor. It is desirable to use short membrane fasteners that engage the top of a deck's flange to reduce the fastener's rocking movement.

However, when there are multiple layers of insulation or tapered insulation or if a roof is being re-covered, limiting attachment to the top flange can be time-consuming and difficult compared with using fasteners long enough to engage the bottom flange. In this situation, it is better to increase fastener density.

They all work together

The successful design and construction of mechanically attached flexible membrane roofs is a factor in calculating wind forces and ensuring the links between roof elements are capable of resisting them. For membrane roofs, this means selecting a material adequately tested using dynamic loadings simulating in-service conditions.

Bas A. Baskaran is group leader of the Performance of Roofing Systems and Insulation subprogram at the Institute for Research in Construction, which is part of the National Research Council of Canada in Ottawa.