Author's disclaimer: This article is presented in an effort to help other professional roofing companies approach snowstorms with the benefit of one company's experiences. My employees and I are not registered engineers, and the references to specific values simply are cowboy engineering.

From March 18-19, the Denver metro area received a record heavy, wet snowfall. Depending on the location, snowfall depth reports from 32 inches to 46 inches (813 mm to 1168 mm) along Colorado's Front Range and 50 inches to 88 inches (1270 mm to 2235 mm) in the immediate foothills were sustained. The Denver metro area population of about 2.5 million people struggled to dig itself out following what was called the worst storm since 1913. The storm was so severe that highways could not be cleared and schools, government offices and most private enterprises were shut down for two days to three days as the snow put its grip on virtually everything. Damage estimates for this storm have exceeded $34 million.

Concerns about building collapse because of the overweight snow conditions causing severe roof deflections on low-slope roof structures required an immediate response. Following is an account of what my company, B & M Roofing of Colorado Inc., Boulder, experienced during the process. It is provided as a reference for roofing professionals and formatted to serve as a checklist outlining the protocol my firm developed. The information, observations and conclusions are based on our response to about 25 structures involving more than 2 million square feet (371600 m²) of roof surface area.

Following the storm, two employees and myself made it into the office. The telephones started ringing almost immediately. Most of the early requests were for information concerning risks caused by the weight of the snow; there already was mention of roof collapses in the area by the local media. Several customers requested snow removal services. We devised a plan—one worker contacted all the project managers and superintendents. They, in turn, contacted foremen, who then touched base with each of their crew members. It worked like a "phone tree." Within two hours, we were able to contact about 50 employees and put them on notice. Our foremen began assembling the crew members, which meant helping each other get out of their driveways, neighborhoods and subdivisions. With the use of cell phones, we were able to keep our status updated at all times.

We prioritized our projects and commitments based on structures that presented the greatest potential for loss of property or life. We decided to approach each project with a team lead by a project manager who did the initial investigation and snow load evaluation and quantified the amount of weight on the roofs. Our project managers also developed a remediation plan and communicated it to our superintendents who organized our crews.

Within three hours, we were in the remediation business with people on-site moving and removing snow. We finished 25 projects during a four-day period. Following the storm, schedules for leak repairs and future preventative maintenance kept us busy for the next 30 days.

Typically, we focus on roof coverings. Most roofing firms, as in our case, do not employ structural engineers and have limited structural knowledge and assessment capabilities. However, building owners, facility managers, property managers and former customers often turn to roofing contractors during weather crises and seek advice concerning actual or potential structural damage to their roof assemblies. The storm in March was no exception.

As a contractor, I immediately was made aware of the need to respond to situations in which buildings were at risk to collapse—jeopardizing lives and properties. Initially, using our labor resources to shovel snow off roofs seemed to be the best way to assist our clients. Although that was true, it was other elements—such as structural assessment, information sharing, roof load evaluations and snow weight calculations—that provided ultimate value to our customers.

The No. 1 need, first consideration and most critical element of snow remediation efforts is to assess the superimposed structural load following a significant snow event.

Snow weight is measurable and quantifiable with some relatively simple methods. But actual field measurement is the only reliable method. Based on what we first knew—1 inch (25 mm) water per 6 inches (152 mm) of snow—we developed the figures in the chart to approach the initial water density and weight quantification.

After determining the superimposed structural load through the following assessment techniques, our employees developed a remediation protocol. When in a similar situation, contractors should consider performing the assessment in the following fashion:

A remediation plan should consist of the following:

On overweight areas at structural midspans ...

It is not necessary or feasible to totally shovel off snow from large roof areas with high parapet walls. The assessment will quantify how much snow must be removed.

A snow remediation plan should begin early after a snowstorm. Keep in mind, your crews also are snowbound, and they have to dig out of the snow at their own homes. Once we had two or three employees mobile by 9 a.m., they had to assist other crew members simply to exit neighborhoods.

Once your employees are mobile, immediately get the equipment they will need, especially heavy plastic scoop shovels, to remove snow. We bought out the only open hardware store's scoop snow shovel supply. Based on our experience, I suggest your crews be given the following: plastic trash bags, measuring tapes, bathroom weight scales, flashlights (power will be off in some locations), cameras (thank God for digital technology), etc. You also may need ladders because roof hatches may not be functional; we couldn't physically open them because the snow weight made that impossible. We had to access some roofs with ladders from the outside of the buildings.

Although you may be rushing to help your customers, don't forget safety. Employees need to bring proper clothing with them, and because surfaces are slippery and icy, roof edge protection and fall protection take on a new dimension. Snow-covered roofs also present huge tripping hazards. Each project was assessed for safety needs by our foremen who held separate safety meetings and project planning meetings before anyone accessed roof areas. Throughout the day, our teams kept in contact and shared what they were learning with each other.

Have field technical groups and project managers immediately do the assessment work. Once the remediation plan is in place, have superintendents or foremen execute the work. Communicate the plan to the entire crew, and assign specific tasks for each crew member. Two distinct teams working in sequence and centrally dispatched can accomplish a significant amount of snow remediation.

While assembling our crews and assessing roof systems, we learned a few other tips. For example, your remediation work includes working with more than a building owner and your workers. Building code officials, police departments and fire departments shut down businesses until they can demonstrate buildings are safe to occupy. Our efforts and work, including documentation, helped many retailers open their stores—with confidence that the buildings were stable—earlier than their competitors. Retail and grocery operations can have profitable selling days following storms as cabin fever sets in and people off from work are ready to get out of their houses. Every hour counts in protecting a structure from collapse and getting a business back on track.

Remember, a snow remediation plan cannot address everything. Unforeseen hazards we encountered and worked to overcome included the following:

From our experience, big box-style structure merchandisers; building additions; manufacturing facilities with large numbers of rooftop mechanical units and process piping above, below or suspended from the roof deck; and canopies were the most prone to collapse or have structural failure.

Interior building indicators of overloaded snow we observed included sagging ceiling grids or a loss of ceiling tile (dislodged), display-case damage where electrical conduit chases attached between a floor slab and the underside of a roof structure, fractured dry wall, and deck deflection and deck movement at screened-in mezzanine areas.

During snow remediation processes, thoroughly discuss with your customers billing rates and your workers' capabilities and response times to which your firm can commit. Get these details figured out quickly because there will be many more challenges ahead and you will want to work and coordinate with local authorities, engineers and building managers.

As building owners and building department officials hear about total roof collapses, the anxiety about loss of property and life escalates enormously. It is important for you to stick to your established communication outline and process; worry usually is a result of a lack of information, updates and data.

And prepare for an after-storm service barrage. Prioritize your firm's response by previous customers, regular accounts and new opportunities. Most of our customers were understanding though concerned about building stability and safety.

After three years of drought conditions in our area, this storm tested our ability to respond, which our team did well. A crisis always will bring people together.

I am proud of our teams' ultimate response to the March snowstorm. We developed some new customers and provided an invaluable service for many of our existing customers.

Conrad A. Kawulok is president of B & M Roofing of Colorado Inc., Boulder.

If
6 inches of snow=1 inch of water 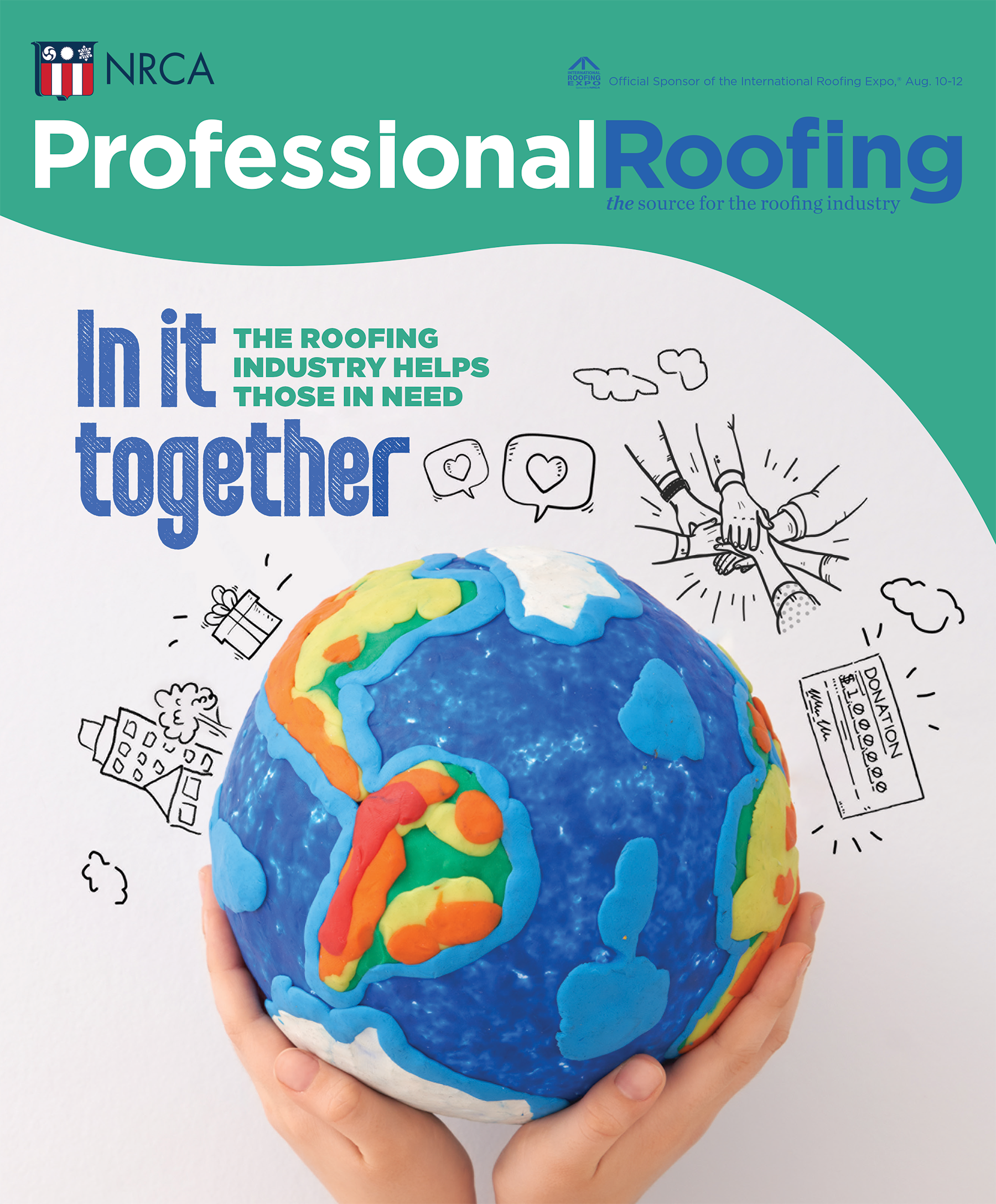