NRCA's Technical Services Section receives numerous inquiries from roofing contractors regarding attic ventilation. A large number of these inquiries relate to building code requirements and how to meet them.

Attic ventilation is addressed in the International Building Code® (IBC) and International Residential Code® (IRC). The International Code Council (ICC) publishes both publications, yet, curiously, the attic ventilation requirements contained in these publications are not identical. Although the latest versions of these codes were published earlier this year, many jurisdictions still use the 2009 edition; I will discuss both codes and editions and address some issues I found confusing. 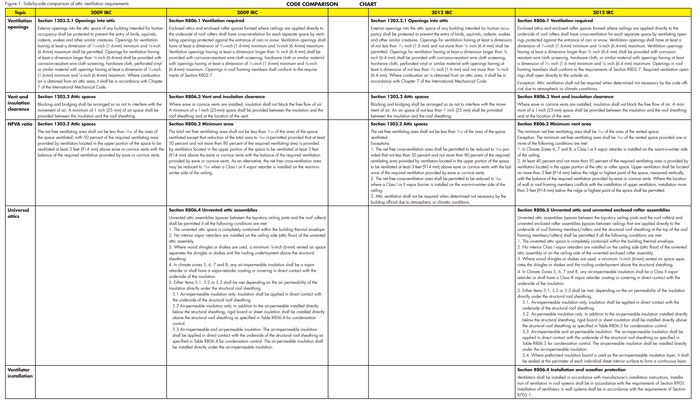 Figure 1: Side-by-side comparison of attic ventilation requirements
Click on the image above to view the table in its entirety.

To ease the discussion, I compiled a summary chart showing a side-by-side comparison of the attic ventilation requirements excerpted from the codes (see Figure 1). The chart also includes section references indicating where the requirements can be found within each code. I encourage you to refer to this chart as you read the article.

Scope of the codes

Before discussing attic ventilation requirements, an explanation of IBC's and IRC's scope is warranted to help determine which code applies. IBC applies to all buildings and structures except detached one- and two-family dwellings and multiple single-family dwellings (townhouses) no more than three stories above grade. IBC defines an attic as the space between the top-story ceiling beams and roof rafters.

IRC applies to detached one- and two-family dwellings and townhouses less than three stories above grade. IRC defines an attic as the unfinished space between the topstory ceiling assembly and roof assembly.

When in doubt, consult local building officials to confirm the applicable building codes and discuss any questions and/or issues.

In IBC 2009, ventilation requirements are located in Chapter 12—Interior Environment, specifically Section 1203—Ventilation. According to Section 1203.2—Attic Spaces: "Enclosed attic spaces and enclosed rafter spaces where ceilings are applied directly to the underside of roof framing members (cathedral ceilings) are required to have cross ventilation for each separate space by ventilating openings protected against rain and snow. A 1-inch minimum air space between the insulation and the roof sheathing shall be provided. Also, blocking and bridging should not interfere with the movement of air."

IBC 2009 also includes sizing requirements for the "exterior openings into attic space intended for human occupancy"; in other words, the vent holes or openings. Openings should have dimensions of at least 1/16 of an inch and at most 1/4 of an inch and be protected to prevent birds, squirrels, rodents, etc., from entering.

IBC 2009 prescribes in Section 1203.2.1—Openings Into Attic, the total net free ventilating area (NFVA) shall not be less than 1/300 of the area of the attic space to be ventilated. Fifty percent of the required NFVA has to be located in the upper portion of the space and at least 3 feet above eave or cornice vents. The balance or remaining required NFVA should be provided by eave or cornice vents. 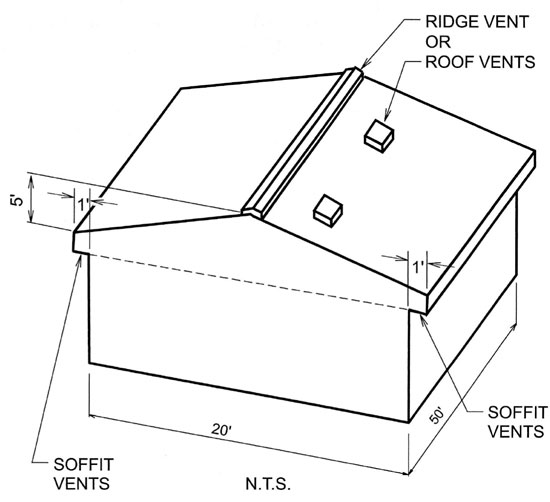 The following shows how to calculate NFVA based on an example taken from the 2009 IBC Commentary. See Figure 2 for an illustration of this example. 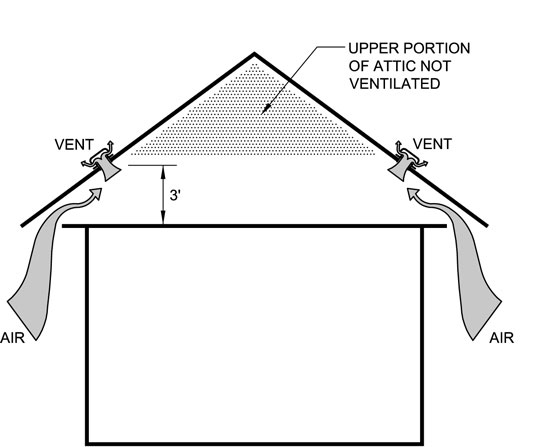 There is one interesting point to make regarding the vents located in the upper portion of the space. For optimum ventilation performance, exhaust vents should be placed at the highest possible location in the space. If you follow the requirements and install vents at 3 feet above the eave vents in a relatively tall attic space, there will be space above the vents that would not be ventilated. See Figure 3.

However, the total minimum NFVA requirement is different in IRC 2009. Section R806.2—Minimum Area specifies the NFVA shall not be less than 1/150 of the ventilated space instead of 1/300 as prescribed in IBC 2009. But there are two available options to reduce the NFVA to the 1/300 ratio. You may use 1/300 if at least 50 percent and not more than 80 percent of the required NFVA is provided in the upper portion of the space at least 3 feet above the eave or cornice vents with the balance of the required NFVA provided by eave or cornice vents.

This option is perplexing. The code prescribes the upper portion of NFVA shall be between 50 and 80 percent. A properly designed ventilation system requires balance to work effectively. For that reason, NFVA should be split equally between the lower and upper portions of a space. It doesn't make sense to allow only 20 percent of the NFVA at intake vents. And why would this proportion allow you to use less NFVA?

The other option to use 1/300 is to install a Class I or II vapor "barrier" on the warm-in-winter side of the ceiling. Be aware this option refers to a "vapor barrier" in the code's printed version of the code. IRC 2009 does not include the term "vapor barrier" in Section 202—Definitions, the section containing word definitions and terms used in the code. However, it does refer to a vapor retarder. This may have been an inadvertent mistake as it is common in the construction industry for vapor retarder and vapor barrier to be used interchangeably. Some online versions of the code refer to a vapor retarder.

In addition, IRC 2009 includes provisions for unvented attic assemblies. Section R806.4 Unvented Attic Assemblies addresses attics where the insulation and air barrier boundary are directly above the attic space instead of the top of the ceiling. Conceptually, this moves the thermal envelope (insulation) above the attic, resulting in the attic being a conditioned or semi-conditioned space.

Accordingly, spaces between the top-story ceiling joists and roof rafters may be unvented if all the following conditions are met:

According to IRC 2009 commentary, the key concept of this section is to move the thermal envelope (insulation) above the attic, resulting in the attic being conditioned. 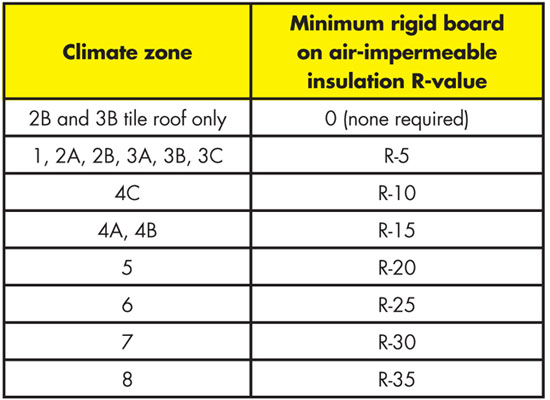 The commentary also notes this section cannot be viewed as modifying or eliminating requirements found elsewhere in the code. For example, the insulation typically used with the provisions of this section is foam plastic, and accordingly the requirements of Section R316—Foam Plastics must be applied. Section R316 requires foam plastic be separated from the building interior with a thermal barrier. R806.4's provisions do not modify or eliminate the requirement for a thermal barrier.

Attic ventilation still is addressed in Section 1203.2—Attic Spaces in IBC 2012, but it was revised and restructured. Essentially, the NFVA ratio changed from 1/300 to 1/150 and three exceptions were added. Two exceptions allow the ratio to be reduced to 1/300. The first exception allows the NFVA ratio to be reduced to 1/300 provided no less than 50 percent and no more than 80 percent of the required NFVA be located in the upper portion of the space at least 3 feet above eave or cornice (soffit) vents with the NFVA balance provided by the eave or cornice (soffit) vents.

The second exception permits 1/300 if a Class I or II vapor barrier is installed on the warm-in-winter side of the ceiling. Note these two exceptions have identical requirements as IRC 2009.

The third exception does not require attic ventilation if a building official does not deem it necessary because of atmospheric or climatic conditions.

There were five modifications to Section R806—Roof Ventilation in IRC 2012. First, an exception was added in Section R806.1—Ventilation. This exception is the same as in IBC 2012 regarding attic ventilation not being required if a building official determines it isn't necessary because of atmospheric or climatic conditions.

The NFVA ratio of 1/150 remains the same as in IRC 2009, but the two exceptions to reduce it to 1/300 were rewritten. The first exception still necessitates a Class I or II vapor retarder be installed on the warm-in-winter side of the ceiling; however, now it only applies to climate zones 6, 7 and 8 (not climate zone 5).

The second exception regarding how NFVA should be distributed and where it should be located also was amended. In addition, the term "ventilator" was introduced. Now, at least 40 percent and no more than 50 percent of required NFVA should be provided by ventilators located in the upper portion of the attic or rafter space. Upper ventilators shall be located no more than 3 feet below the ridge or highest point of the space, measured vertically, with the balance of NFVA provided by eave or cornice vents. And if walls or roof framing members conflict with the installation of upper ventilators, more than 3 feet shall be permitted.

This revision improves on the definition of exhaust vent locations found in IBC 2009, IRC 2009 and IBC 2012. As previously mentioned, these three codes base the placement of exhaust vents from the eave location.

It is more rational to base the placement of exhaust vents on the ridge or highest point in the attic space instead of near the lowest point.

Furthermore, distribution of NFVA in the attic space is back to being balanced because no more than 50 percent—as opposed to 80 percent—of the NFVA is required in the upper portion of the space.

As you can see, there is some variation within IBC 2009, IRC 2009, IBC 2012 and IRC 2012 when it comes to attic ventilation requirements. I encourage you to refer to NRCA's guidelines on attic ventilation found in the Condensation Control section of The NRCA Roofing Manual: Architectural Metal Flashing, Condensation Control and Reroofing—2010. NRCA guidelines are based on best roofing practices and essentially meet building code requirements. I also encourage you to consult local building officials to confirm the applicable building codes to verify they are meeting the requirements.