Weather and the roofing industry

Weather is deeply embedded in the roofing industry 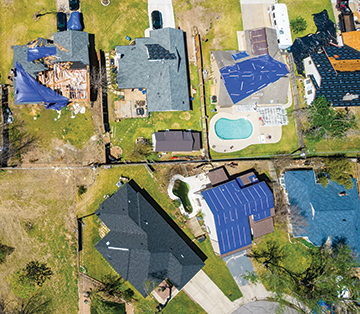 I was visiting a contractor member recently, and somehow we found ourselves talking about NRCA’s logo, the “shield.”

I mentioned the weather elements (wind/rain, sun and snow) depicted on it, and he said something to the effect of: “Ahh. I never knew what those were or that they represented something specific.”

This makes sense to a certain degree. Usually, the logo is small on a masthead or in the corner of a brochure or webpage, so you may have not noticed the details within it. But the symbolic elements in the NRCA shield represent the essence of what our industry does: protect people from weather. And nature and the elements are increasingly testing our industry.

NRCA’s longtime Vice President of Technical Services Mark Graham remarked recently that a hurricane can destroy the equivalent of one month of roofing materials required for the U.S. Just one storm in one region!

In 2021, the U.S. Army Corps of Engineers released an infographic outlining the recovery efforts following Hurricane Ida. The graphic covered data about everything from water quality assessments to generators installed. But first among the items was “Temporary Roofing: Blue Roof Installs,” and nearly 60 days after the storm there were more than 34,000 verified requests for temporary roofs within just 26 parishes of Louisiana.

According to the Insurance Information Institute, an organization that aggregates financial damage information, five of the 10 costliest hurricanes in history happened during the past five years. Three of those happened in a particularly brutal 2017 season with Harvey, Irma and Maria only to be followed up in 2020 when 31 storms formed in the Atlantic. There were so many hurricanes, the World Meteorological Organization ran out of names and had to move onto the Greek alphabet to identify the storms.

Being relatively new to Chicago and the Midwest, I wasn’t familiar with the term “derecho” when a 2020 storm produced “the most damage in the least amount of time” in history. A derecho is essentially a high-wind storm (on the order of a tornado or hurricane in the most extreme case) except the wind blows straight. A derecho came barreling through the Midwest and caused an estimated $11 billion in damage in just a few hours. It was the sixth year in a row to have 10 or more individual billion-dollar disaster events in the U.S.

The insurance industry is acutely aware of these events because it pays the billions of claims dollars resulting from them. In 2010, the Insurance Institute for Business & Home Safety® opened a new research center capable of full-scale testing at hurricane wind speeds to learn more. IBHS conducts research to identify risks and potential mitigations in building methods, materials and practices. The organization brings an academic and scientific approach to examining knowledge gaps in four primary areas:

In general, most insurance claims dollars are attributed to losses related to roof damage. The percentage can be somewhere between 70% and 90% of all claims dollars in a given year. Being able to reduce the risks and assess claims as accurately as possible is important; otherwise, controversy, economic pain and disruption happen.

For example, a recent headline from an Orlando, Fla., television station announced: “Another home insurer will stop insuring Florida homes amid market ‘collapse.’” The story then outlined this was the 13th home insurer to exit the state this year alone.

And following the destructive wildfire season in California in 2018, Bloomberg reported insurers refused to renew 235,250 California home insurance policies in 2019, a 31% increase from the prior year. In ZIP codes that had a moderate to very high fire risk, nonrenewals jumped 61%. The 2018 fires were the deadliest and costliest on record with losses exceeding $16 billion.

There’s only so much protection a roof system can provide when 150-foot ponderosa pines are burning all around, but IBHS has found small steps builders can take. For example, reducing attic screen mesh openings from ¼ of an inch to 1/8 of an inch kept blowing embers out of attics and reduced fire risk to structures. Property insurance coverage can be a legal, political, emotional and financial landmine these days. The effects and controversy coming out of high-loss events can last years and affect millions of families with roofing contractors caught in the mix.

NRCA will continue to work with IBHS and the insurance industry to ensure roofing is part of the dialogue. We’ll continue advocating for proper installation practices, which is a key component of NRCA ProCertification®; verifying installers have the skills and expertise to install roof systems properly because proper installation is crucial to having roof systems hold up and function as intended during a severe weather event.

The weather elements in NRCA’s logo aren’t all-inclusive or directly representational, but they get to the core of our collective job: to be a shield against the elements in all forms because the financial and emotional losses stemming from the elements are as intense as ever.

This column is part of News + Views. Click here to read additional stories from this section.