Recently, government-driven energy-conservation programs have affected the roofing industry. For example, the U.S. Department of Energy successfully has promoted the use of light-colored roof membranes through its ENERGY STAR® program. And studies conducted by Lawrence Berkeley National Laboratories, Berkeley, Calif., have focused on heat islands and their potential effects on air pollution. The studies indicate that factors contributing to high temperatures in urban environments include a lack of vegetation, nonreflective roofing materials and dark-colored pavements. Of the three causal factors, lack of vegetation is thought to contribute to 56 percent of the temperature rise with roofing and pavement contributing to the remainder.

Although these environmental initiatives have received a great deal of emphasis in urban areas within the southern United States, the sweeping application of new energy standards has forced many roofing contractors to abandon preferred roofing products.

Nowhere have energy standards gained more attention than in Chicago where a new Chicago Energy Code was approved in June. The standard includes the requirement that newly installed roof systems maintain an albedo of 0.65 (a solar reflectance of 65 percent), which eliminates the use or substantially increases the cost of predominant roof systems in the Chicago area. The Chicago Energy Code currently is under review to finalize acceptable levels of reflectivity. The code body is considering an approach that gradually would phase in the reflectivity standard over time. 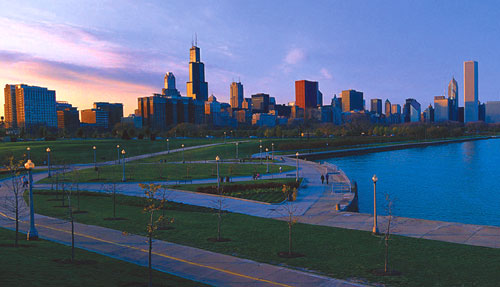 Nowhere have energy standards gained more attention than in Chicago.

Aimed at preventing potential heat islands, the standard focuses primarily on roof system color rather than lack of vegetation. Many Chicago-based roofing contractors objected to the standard because it had been formulated with a limited amount of input from roofing industry experts. Suggestions from industry leaders to improve the code focused on potential alternatives, such as the inclusion of additional insulation to achieve the same aim of improving energy efficiency.

The application of the cool roof system theory in the Chicago market causes concern because of the city's northern location. The trendy nature of the energy-efficiency issue perhaps caused an overcorrection toward lighter-colored membranes without considering other viable solutions that achieve the same objective.

For example, when heating-degree days outweigh cooling-degree days, the inclusion of additional insulation provides a year-round improvement in energy efficiency. Heating-degree days measure climatic severity through one season's heating cycle. The measurement is taken from American Society of Heating, Refrigerating and Cooling Engineers (ASHRAE) Inc. data and based on the daily difference between 65 F (18 C) and average mean temperature for a particular location. The value for cooling-degree days is used to establish the annual cooling time and load for a location. The value uses 65 F (18 C) as the baseline condition and is a measurement of severity above this temperature during cooling periods. The values are based on 30-year weather averages. Southern locations have a greater number of cooling-degree days than cooler climates.

A study was conducted by Carlisle SynTec Inc., Carlisle, Pa., to demonstrate the relative effect of roof color and additional R-value on the energy efficiency of a structure. The values used for the analysis were derived from ASHRAE 90.1 standards for heating and cooling. The roof systems selected demonstrate various energy efficiencies for the three ranges of reflectivity—white, gray and black. Energy costs are based on heating and cooling requirements for a given roof assembly in different geographic areas. 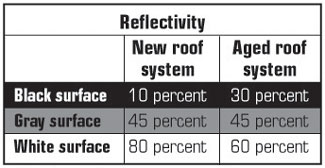 Using an analytical model formulated by an Atlanta-based independent roof consultant, Patrick Downey, energy costs were calculated for various roof assemblies. The intent of the comparison is not to project exact energy costs for a particular building but to show the relative energy efficiencies of different roof assemblies in a given locale. The model permits analysis of the effects of insulation's R-value, roof membrane color and energy costs. The model provides a basis for comparison by examining the effects of these elements over time.

The study compares the relative energy efficiencies of different colored roof assemblies in Chicago, Baltimore and Atlanta. In each area, the study demonstrates the positive effect insulation can have on a roof system's life-cycle cost during a 15-year period. To ensure a clear basis of comparison, issues such as maintenance costs for lighter-colored roof systems, which have not been in existence for 15 years, were kept constant with the alternative, darker-colored system.

The effect of membrane color on energy efficiency was a key element evaluated in the study. A light-colored membrane provides energy savings in southern climates where cooling-degree days dominate. Conversely, black roof systems usually are preferred in northern climates because of the increased number of heating-degree days required. Downey reports that in northern climates, the absorption of solar energy by black roof systems provides a 1 percent reduction in heating costs.

Another key element in the analysis is the addition of R-value to a roof system, which typically lessens the effect of membrane color. As more insulation is added to a system, the heat flow from the roof's surface will be restricted from the structure's interior. Therefore, the study's objective was to demonstrate how to optimize the energy efficiency of a roof system over time through the proper selection of membrane color and insulation.

For the study's purposes, a comparison was made between light- and dark-colored roof systems that averaged 50,000 square feet (4500 m²).

By using ASHRAE 90.1 standards, the amount of heating- and cooling-degree days are determined by a project's location. The R-value for each contributing element in a roof assembly also was captured on a cumulative basis. For the study's purposes, the roof assemblies selected did not include values for vapor retarders, deck, air space or batt insulation. Energy costs can be projected for each option under consideration.

The return on investment for one roof system versus another can be derived by calculating the differences between bid costs (less write-offs for depreciation and interest expenses) from a building's operating costs. Operating costs incorporate energy costs for each roof system plus maintenance costs. For the study, maintenance costs were kept the same despite the shorter track record of lighter-colored roof systems.

The appeal of ballasted roof systems in southern climates is strong because of the reflectivity provided by ballast and the ease with which insulation can be added. Ballast is a heat sink, so a membrane is protected from the sun during a majority of the day, keeping the membrane cool.

The Georgia State University study showed that between May 1998 and June 1998, membranes of ballasted roof systems stayed relatively cool with surface temperatures registering 117 F (47 C). Tests were based on averages of 10 readings per roof assembly. This contrasts with a granule-surfaced modified bitumen roof system measured at an average of 143 F (62 C).

In addition to a cooler membrane, a ballasted roof system permits the addition of substantial quantities of insulation without significant increases in installed cost, resulting in a more energy-efficient solution.

As the examples have shown, the answer to energy efficiency is not always as black and white as one might think. Roof systems that have good performance levels can be specified to provide competitive energy-efficient solutions. With the initial cost per R-value for insulation averaging about 2 cents per square foot, the cost to offset the benefit provided by a white roof system is slight. In Chicago, adding an R-value of one would not significantly affect a roof system's installed cost.

Negative environmental effects greatly can be reduced by installing products that are efficient to manufacture and do not produce excessive waste. Although roof membrane color is part of the solution, it only is an element in the process.

Building designers will continue to focus on improving structures' energy efficiencies. The challenge for architects and specifiers is to sort through the many options that can achieve the same objective.

The roofing industry remains somewhat unique in that the performance of an actual product increasingly is becoming less important than its color. Unfortunately, the effects of the initiatives related to heat islands have dominated the debate in the roofing industry. The reality is that though only a small portion of the United States is affected by the potential for heat islands, the focus has shifted away from more economical means to achieve energy savings.

The focus should remain on using roof systems that will perform for the long term. The decision by a building owner or contractor to switch from a proven technology to something new should not be made without proper study. Because the benefit of added insulation is fairly intuitive, this should be the first remedy when energy efficiency is a concern. The best bet for the environment and a building owner's dollar is a roof system that will meet long-term expectations for performance and energy efficiency.