What the heck is EOS?

A new business management system can help your company thrive

The most successful organizations excel because they follow a system. In football, Nick Saban's Crimson Tide perform year after year because of the system the team follows. In the military, the U.S. Marines turn over 80 percent of the entire organization every five years, yet it remains the most effective fighting force on the planet because of the system it follows. In the roofing industry, your company also could operate just as successfully by implementing a strict operating system. Mine did.

One such system is a hot trend in business: the Entrepreneurial Operating System™ (often called EOS). After decades of business consulting success, Gino Wickman documented this program in his book, Traction. The simple system enables business owners and managers to elevate priority issues, allowing an entire organization to focus on the highest priority issues or opportunities. Following is an overview of the system, the steps you can take to implement it in your organization and resources that will expand on the ideas represented here.

At first, I was reluctant to buy into the touchy-feely movement of implementing core company values and the importance of business plans. It wasn't until our company employed more than 10 people that I realized how critical it is to make all business decisions based on a set of higher standards and goals. The Entrepreneurial Operating System can help you do that and is based on the following foundational tools, with the most important being the Vision Traction Organizer. When embarking on your Entrepreneurial Operating System journey, you should: 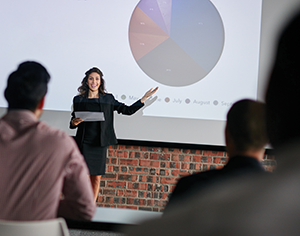 How to get started

To help you begin to implement the Entrepreneurial Operating System process, I suggest reading Get A Grip by Gino Wickman and Mike Paton first. This is a story about an actual company's transformation using the Entrepreneurial Operating System, which provides examples of personalities and obstacles. Then, read Traction, which is more of a how-to manual of sorts. There also are free tools available on www.EOSWorldwide.com.

My company began implementing this system in February 2015. Admittedly, our first time around with the Entrepreneurial Operating System method didn't give us the full results we expected because we took too many shortcuts. After two years, we hired an implementer, and it was well worth the money. I suggest you gain a basic knowledge of the system by first reading the two books before hiring an implementer, but there's no question having an outside person holding your team accountable is a smart investment.

In addition, it's vital this system has complete buy-in from leadership. Otherwise, it will not work. Being comfortable with opening up the books is critical. It took me three years to get comfortable with being financially candid, but doing so has paid huge dividends. Our company grew from $18 million in sales to $48 million in sales thanks to this system. I encourage all roofing contractors to research the system and explore how it can help them achieve their goals. 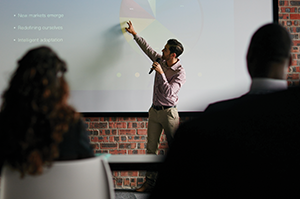 A typical L-10 meeting starts with a five-minute "segue" during which each person shares a personal and/or professional accomplishment that took place since the most recent meeting. The segue is designed to break from the grind and remind attendees what progress looks like.

Next, a five-minute scorecard section takes place during which attendees report the three to seven most important numbers to show how the company is performing. The scorecard should be updated and reviewed weekly, and only the person accountable for the numbers reports them. This ensures personal responsibility and accountability. A sample scorecard for sales and marketing would sound similar to this: "Our goal is 60 estimates per week. We only completed 48. Please note this as an issue."

Next, for five minutes, attendees will report whether their quarterly goals are on or off track. Each quarter, there should be timelines of small milestones of events with dates, usually one to two weeks. The likely outcome is the team will note that being off-track is an issue and recommend ways to get back on track. This discussion can be the most powerful tool in the Entrepreneurial Operating System arsenal. When the right goals are chosen and the plan is followed correctly, the company functions more smoothly.

This is followed by a five-minute to-do list discussion, which includes items that typically are one- to two-week tasks that are assigned to a single individual. Items not completed would be dropped to the issue/opportunity list and discussed later.

The next five minutes should be spent discussing big events, possible issues or pride. This is not the time to go into details; rather, attendees should simply call out a customer's name or employee's name along with a single sentence. An example would be: "Alice is doing awesome in her new role." Or: "The land development project is off schedule because of the delivery issues our supplier is causing."

The next 40 minutes of the meeting should be spent addressing issues and opportunities. Each person attending the meeting should vote for the most important item to discuss. The meeting may end up being completely devoted to solving one problem. However, the problem will be solved, and it won't be an issue again. Once the first issue is solved, the team votes on the next highest priority issue to solve and so on. More direction about how to run this part of the L-10 meeting can be found in Traction.

The final five minutes of the meeting should be spent reviewing what was resolved and upcoming to-do lists and assignments. Any upcoming meetings or important events also are mentioned. Everyone then rates the meeting with a ranking between one and 10, 10 being the best. The question usually asked is: "Did we accomplish something today?" If a vote of eight or less is given by anyone, it is acceptable for the meeting leader to ask what could have been done differently to achieve a 10. The person giving the score is required to answer.

I suggest implementing the L-10 meeting agenda with your executive leadership team first. Save deploying the meeting agenda to all departments until you have a good grasp on the fundamentals. Our organization was forced to do a second launch because we did not have the comfort needed to get the most out of our L-10 meetings.