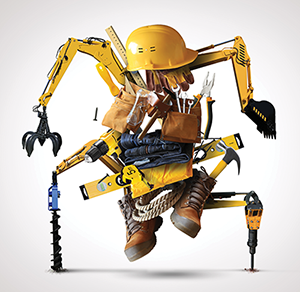 There's one surefire way to ease the demand for workers and increase retention: robots.

According to a report by Tractica, a market intelligence firm based in Boulder, Colo., the traditionally staid, technology-averse construction industry is facing a future of significant disruption led by automated workers.

In the report "Construction & Demolition Robots," Tractica predicts construction robots will increase market revenue from $22.7 million in 2018 to $226 million by 2025. And by 2025, there will be more than 7,000 robots deployed to construction and demolition sites. The report was based on interviews with 28 CEOs and other key players, as well as 60 emerging industry participants.

Examples of tasks robots could do include demolition, drilling and lifting loads. Robots currently are being used to hang drywall, weld and lay bricks.

"At this early stage in the construction robotics industry, a few companies are offering products for sale or lease," says Tractica Senior Analyst Glenn Sanders.

According to the website www.therobotreport.com, robots manufactured by Australian company Fastbrick Robotics can build brick houses four times faster than human workers. The technology uses a combination of a robot and 3D printer to lay the bricks as precisely as any human.

Other sectors experiencing an influx of task-oriented robots include hospitals, specifically operating rooms; law enforcement and emergency responders; farmers; and the military.

When you consider the diminished supply of workers in the roofing industry and the labor-intensive demands placed on roofing workers, you have to wonder: Will the future include robots taking supplies in self-driving vehicles to job sites to help complete roofing work?

To read a free executive summary of the report, go to www.tractica.com.

Ambika Puniani Reid is editor of Professional Roofing and NRCA's vice president of communications and production.