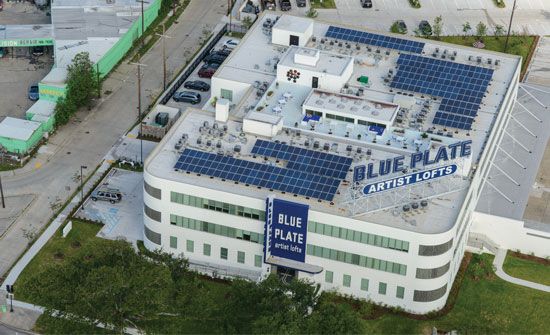 About 3,300 MAGE® POWERTEC PLUS modules supply 1.4 gigawatt-hours annually to six housing areas that are part of Louisiana's revitalization plan. Among the converted buildings is the Blue Plate building in New Orleans. Built in 1941, the Blue Plate building is listed on the National Register of Historic Places and now is powered by a 63-kilowatt system.

The revitalization plan was designed, engineered and executed by Pontchartrain Mechanical, Metairie, La. The plan developer, HRI Properties, New Orleans, has been revitalizing cities by creating diverse, vibrant, sustainable communities. Funding was made possible through the American Recovery and Reinvestment Act of 2009 and the EmPower Louisiana initiative administered by the Louisiana Department of Natural Resources.

Blue Plate Mayonnaise was one of the first commercially prepared mayonnaise products in the U.S., according to blueplatemayo.com.

In 1929, Blue Plate Foods Inc. was founded as a subsidiary of Wesson-Snowdrift Oil Co., and mayonnaise production began in a small warehouse in Gretna, La.

In 1941, Blue Plate Foods factory moved across the Mississippi River to New Orleans, where the company built the ultramodern, three-story concrete building, which was designed by architect August Perez. Although construction was delayed by World War II, the new plant officially opened in November 1943.

The company was bought by Hunt Foods in 1960 and in 1974 was acquired by William B. Reily III, which returned the ownership to Louisiana as part of Wm. B. Reily and Co.

Mayonnaise production ceased at the Blue Plate Foods factory in 2000.