On June 6, 2001, the Chicago City Council approved an ordinance that substantially revised the Municipal Code of Chicago. Included in the ordinance was an upgrade of the code's existing insulation requirements to require compliance with ASHRAE Standard 90.1-99, "Energy standard for buildings except low-rise residential buildings," and add prescriptive provisions that required low-slope roof systems to have an initial solar reflectance of 0.65 and maintain a solar reflectance equal to or greater than 0.50 for three years after installation.

Given that Chicago historically has been a bitumen-based roofing market, with built-up and polymer-modified bitumen membrane roof systems making up a majority of the low-slope roofing inventory, this ordinance's minimum solar reflectance requirement, in effect, mandated a major change in roofing material and product usage in Chicago.

The ordinance initially was passed by the Chicago City Council with virtually no notice to or input from the roofing industry. Also, the city initially indicated the ordinance was intended to modernize the city's energy code with a focus on improving energy efficiency while providing for flexibility in building design. Subsequently, city officials also acknowledged a large motivation behind the ordinance was an attempt to reduce the urban heat island phenomenon in downtown Chicago.

What follows is an account of our participation in helping revise the city's energy code. We have adapted our research paper, "Study of roof system reflectivity and near-surface air temperatures in Chicago, Illinois," that we presented at the Cool Roofs Symposium in May in Atlanta for this article.

In September 2001, we began working with a group of concerned roofing professionals who loosely referred to themselves as the "Chicago Roofing Alliance." This group consisted of roofing contractors, contractor trade associations, a labor union, design professionals, and product and material manufacturers who have a specific interest in the Chicago roofing market.

During the next several months, the alliance met several times with city representatives. City officials acknowledged they did not realize the full effect the ordinance had on the roofing industry and delayed implementing the effective date of the ordinance, which originally was Dec. 1, 2001.

With concurrence from city officials, the alliance agreed to undertake a research study intended to provide a basis for a workable compromise between the city and alliance while taking into consideration the city's objectives.

Alliance participants met on several occasions and outlined a research study consisting of surveying the solar-reflectance properties of existing roofs in the city and locally available roofing aggregate, as well as developing a model simulation of near-surface air temperatures. The model simulation is intended to determine the specific effect roof systems' solar reflectivities have on Chicago's urban heat island.

Alliance representatives measured the solar-reflectance properties of 20 nondark-colored roof systems of varying ages throughout the greater Chicago area. Measurements were conducted according to the "D & S method," complying with ASTM C1459, "Standard Test Method for Determination of Solar Reflectance Near Ambient Temperature using a Portable Solar Reflectomer." The age, roof system description and average solar reflectance measured for each roof system is shown in Figure 1. 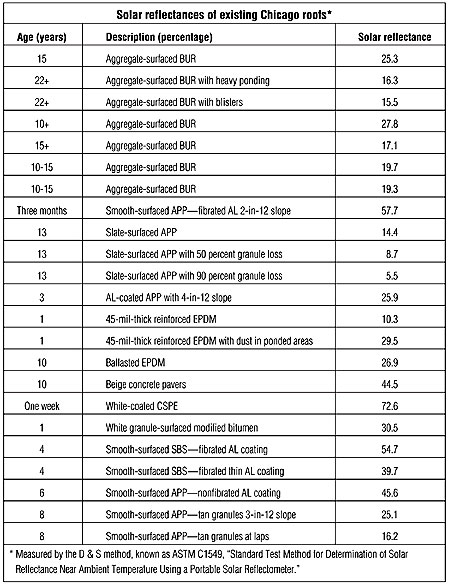 Figure 1: The age, description and solar reflectance of each roof studied in Chicago

Dark-colored roof systems, which make up a large portion of Chicago's roofing inventory, are known to have initial solar-reflectance values as low as 0.06 when first installed. These reflectances may increase slightly as the roofs weather and "gray out."

Alliance representatives obtained samples from 11 quarries that supply a vast majority of the roofing aggregate available in the Chicago area. Samples were measured in an as-received condition and after washing to remove accumulated dust. The "washed" condition is considered to be more representative of aggregate installed on roof systems because the accumulated quarry dust will be washed off with rain. Solar-reflectance measurements were made in accordance with the "D & S method," complying with ASTM C1459. The results are shown in Figure 2. 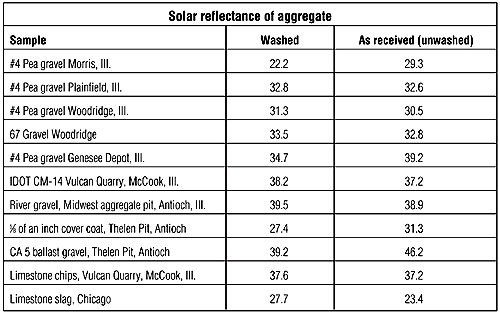 Next, the alliance retained researchers from the University of Western Ontario to run model computer simulations of urban air temperatures in the Chicago area as they are affected by changes to solar reflectivity of roof systems' surfaces. For modeling purposes, this work considered two areas: a dense, high-rise building environment representative of downtown Chicago and closely spaced single-story homes with some vegetation between, which is representative of Chicago's urban residential areas.

Model simulations were run for periods of clear sky conditions in the summer, winter and spring with no assumed advection (horizontal air movement, or wind). This condition is a theoretical worst-case scenario and will have the largest effect on air temperature. A simulation of the downtown area also was run with advection representative of a typical summertime wind or lake breeze, such as occurring in Chicago off Lake Michigan.

The study results are shown in Figure 3. Daily average values are represented by symbols, and the ranges in daily values are depicted by vertical bars. Symbols and vertical bars are offset in the figure by about 0.01 albedo units to avoid overplotting. 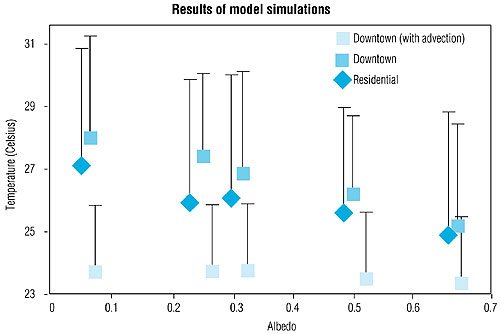 Figure 3: Results of a study conducted by the University of Western Ontario

The downtown scenario was run without wind (no advection) and with a lake breeze effect (with advection). Advection was found to have a substantial effect and negate the effect of heat absorption from surfaces with low solar reflectivities.

This model simulation does not account for all the heat energy from heating, ventilating and air-conditioning (HVAC) equipment; vehicle emissions; engine heat from street traffic; or other forms of heat released to the atmosphere from human activities. Also not included are all forms of combustion using fossil fuels. All of this unaccounted energy is referred to as "anthropogenic heat." Heat energy of this type appears to contribute 0.7 degrees Fahrenheit (0.4 degrees Celsius) to a daytime heat island (air surrounding the street environment) and 1.4 degrees Fahrenheit (0.8 degrees Celsius) at night.

Roof, wall and pavement surfaces also affect air temperature because they absorb solar energy, but the model includes this factor. Other research, which we cite in our paper, has stated for a large city, increasing the albedo (solar reflectivity) of pavement from 0.1 to 0.35 (asphalt pavement to concrete pavement) may decrease summertime air temperatures by 1.1 degrees Fahrenheit (0.6 degree Celsius).

This same research also states "the effects of albedo changes will be washed out where the wind is high."

Chicago has clear weather conditions 23 percent of the time with 29 percent partly cloudy and 48 percent cloudy. A summer day with no wind, no cloud cover and clear air is rare. Therefore, the results in Figure 3 are a theoretical worst-case scenario, not a commonly occurring situation in the Chicago area. When considering advection, the difference in air temperature between a roof system with a solar reflectance of 0.06 and one with 0.65 is less than 1.8 degrees Fahrenheit (1 degree Celsius). This figure is similar to that caused by anthropogenic heat (HVAC unit exhaust, engine heat, human activities).

Following the initial two studies, alliance representatives met with city representatives to share the data. This and several subsequent meetings resulted in an amendment to the city's ordinance providing for an interim minimum solar-reflectance requirement for low-slope roof systems to 0.25 until Dec. 31, 2008. The city council approved the amendment in September 2004 with an effective date of January 2005.

The interim requirement effectively eliminates uncoated, smooth-surfaced, built-up, polymer-modified bitumen and EPDM membrane roof systems from being installed in Chicago. However, the significance of the amendment is these systems are not eliminated entirely from the Chicago marketplace because they can be installed when surfaced with aggregate; certain light-colored mineral granules; or certain relatively highly reflective, field-applied coatings to achieve the city's minimum solar-reflectivity requirement.

For Chicago, the amended ordinance effectively raises minimum solar reflectance for new, low-slope roof systems from 0.06 to 0.25. Although some may view this as only a minimal increase, the magnitude of this increase (a 417 percent improvement) is of the extent that now other sources of urban temperature increases, including those identified as anthropogenic heat, have a similar or greater effect on the urban heat island in Chicago.

In 2001, when Chicago updated its energy code to include stringent minimum requirements for roof systems' solar reflectivity levels, it set a high standard for roofing professionals to achieve. Also, the city unknowingly eliminated roof system types that make up a large portion of Chicago's roofing inventory and perform well.

From our standpoint, our work on this technical research was not one of serving any proprietary interests—we have none—or to protect or promote a specific roof system type or product. Instead, our motivation was to keep choices regarding roof products, materials and systems between roofing professionals and their building owner clients without undue third-party influences.

As a result of this research, we have learned interesting technical lessons that previously were unrecognized (or at least not widely published).

First, advection (horizontal winds) has a large effect on urban temperatures and needs to be considered when attempting to accurately represent the urban heat island effect.

Second, a relatively small, incremental increase in roof systems' minimum solar-reflectance levels (from 0.06 to 0.25) can have a notable effect on urban temperatures. However, for Chicago, increasing roof systems' solar-reflectivity levels beyond a 0.25 level will have diminishing returns because other sources of temperature increases, such as anthropogenic heat, have equal to or greater roles in Chicago's urban temperature and heat island phenomenon. For other cities, this same fundamental relationship also may apply.

We hope these lessons and others can be investigated further as the topics of roof systems' energy efficiency, solar reflectivity and their effects on urban temperatures begin to be better understood.