Doing it better than Wright

Fallingwater, one of the greatest American architectural achievements, is renovated

Most cities have one—if not several—landmarks. Chicago has the Water Tower. New York has Grand Central Station. And Mill Run, Pa., has Fallingwater. Rural Pennsylvania became an architectural focal point in 1937 when renowned architect Frank Lloyd Wright designed Fallingwater for the Kaufmann family. The family, who owned Kaufmann's Department Store in Pittsburgh, used Fallingwater as a vacation and weekend home until the home was donated to the Western Pennsylvania Conservancy (WPC) in 1963.

Although WPC strives to preserve Fallingwater so its uniqueness can be enjoyed by visitors, some believe Wright did not intend the vacation home to last as long as it has. Despite this belief, WPC embarked on an $11.5 million renovation project, which focused on restoring Fallingwater's sagging structure. 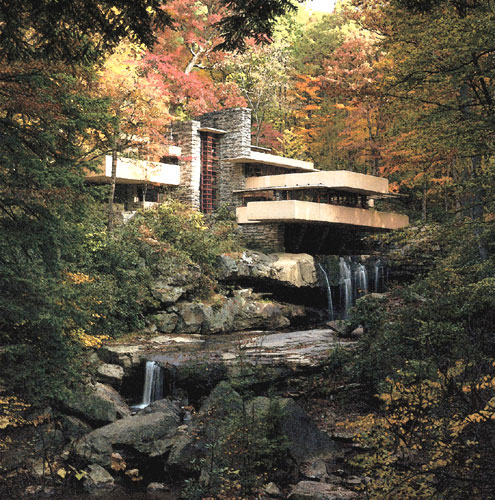 Fallingwater visitor tours temporarily halted Nov. 5, 2001, so the building's cantilevers, or supporting shelves, could be reinforced. Tours reopened in spring 2002 while work continued on the rest of the house and surrounding grounds. The three-year renovation project's goals are to stabilize and waterproof the house's four cantilevered terraces, restore its built-in wood furniture, repair the windows and improve the grounds. Part of the work included reroofing the building's low-slope roof systems. 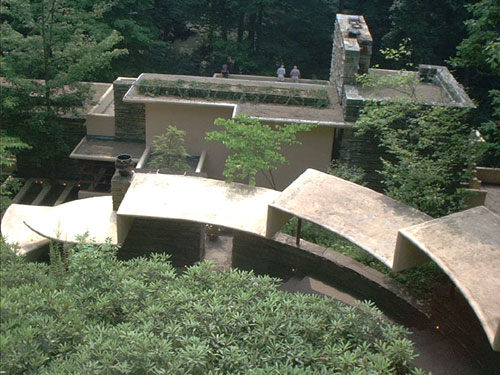 Frank Lloyd Wright designed Fallingwater as a series of cantilevers, or supporting shelves.

J.L. Robinson Inc., Pittsburgh, was asked to submit a bid by Fallingwater's curator and architect. After being awarded the roofing and waterproofing project, J.L. Robinson was instructed to tear off existing roof systems and terraces and install new roof and waterproofing systems on all roof and terrace areas. Fallingwater originally featured built-up roof (BUR) systems, and EPDM single-ply systems have been added during subsequent renovations.

John Robinson, president of J.L. Robinson, was excited—and a little concerned—to work on such a high-profile project.

Robinson explains: "Its design is unique. It is cantilevered above a waterfall in a continuously damp environment; it is a museum with tours six days per week."

The Kaufmann family had a small, rustic cottage it dubbed "The Hangover" in Mill Run. In 1931, the family bought a 1,600-acre (640-hectacre) tract to build a year-round vacation home. They wanted the new house to be built away from a paved road that was built near their existing cottage and near a waterfall, which was their favorite spot on the land. The Kaufmanns assumed the waterfall would be admired from the house, but Wright believed the family eventually would become desensitized to the waterfall if the house overlooked it. Wright, therefore, built Fallingwater on top of the waterfall.

Fallingwater, which mimics the rock ledges' natural patterns, is designed as a series of cantilevers. The house is anchored into a rock next to the waterfall; extends over Bear Run, a stream; and is counterweighted by massing at the back. Wright built the house with sandstone from a nearby quarry. The sandstone was chosen to complement the concrete cantilever floors. Wright also incorporated framed glass into the design to give the house pattern and rhythm. Wright chose these materials to create a home that was intimate and informal but ample.

The house is sheltered in the back, and rooms open and flow toward the woods. Low ceilings were incorporated to guide one's eyes outward toward nature, not upward to the interior. Light comes from several sides of the house to provide a balanced ambience. The house features a guest and service wing and cost $155,000 to build.

Fallingwater is the only Wright-designed house open to the public with its settings, original furnishings and artwork intact. The house features 169 pieces of original walnut furniture designed by Wright, as well as paintings, sculptures, ceramics, art glass and miscellaneous household items the Kaufmanns used as decorations. The collection includes items created by Audubon, Tiffany, Diego Rivera, Pablo Picasso, Jacques Lipchitz, Richmond Barthe and others.

Although Fallingwater flows with Wright's concept of organic architecture, the harmonious union of art with nature, it was not properly supported nor designed and has been affected by gravity. Robinson believes Wright gave the Kaufmanns a beautiful, serene building that matches the landscape, but he says Wright should have better accounted for gravity by constructing the cantilevers with camber to create more resistance.

The Kaufmanns' engineer also thought Wright's specifications for reinforcement were incorrect. Wright specified eight 1-inch- (25-mm-) square bars be placed in each beam. But the engineer believed the beams needed additional reinforced steel, and 16 bars were installed. But that still wasn't enough.

Soon after moving into the house, the Kaufmanns noticed it was sagging. Edgar Kaufmann Sr. regularly measured the deflection until his death in 1955. WPC resumed taking measurements in 1963 and eventually installed monitoring devices. Since construction, the first-floor terrace has sagged 1 3/4 inches (44 mm) and living room terrace has deflected 7 inches (178 mm). Until the renovation project, cracks created by the sagging cosmetically were patched. But more was needed to preserve the building.

In 1996, WPC shored up cantilevers with temporary posts and hired an engineer to examine and fix Fallingwater's structural problems. It was determined Fallingwater would fall into Bear Run if it was not repaired.

During inspections after 1996, an engineer discovered the living room cantilever supports itself and the master terrace, which leads from the master bedroom and rests on the living room's steel window frames. To stop the sagging, three of four 36- by 20-inch (914- by 508-mm) concrete beams, which run north-south and are placed about every 12 feet (4 m) on center under the living room, were strengthened with a post-tensioning system. To do this, steel cables were placed along each side of the beams. One end of the cables was anchored in new concrete blocks attached to beams, and the other end fed through holes drilled through the outside living room wall. Hydraulic jacks gradually tightened the cables.

On March 11, 2002, structural repairs were complete on the main level. In addition to repairing three beams, several smaller east-west joints were post-tensioned; cracks in the concrete were repaired; and three cracked joists were recast. During this work, the house lifted 1/2 of an inch (13 mm), and it no longer rests on temporary shoring. The repair work cannot bring the house to its original height; it only can stop further sagging.

Robinson says waterproofing problems always existed at Fallingwater because of the building's environment, unique design and construction, as well as a lack of specialized construction details. Many waterproofing materials used now were not available during Wright's time.

Robinson jokes, "If I were there 65 years ago, they would have done a much better job."

J.L. Robinson began phase one of the project in September 2001 and will finish phases two and three this spring. The company still must waterproof Edgar's terrace and the building's interior and exterior bridge, which leads to the servant and guest-house walkway. Work was delayed by winter weather that struck the East Coast in December 2002.

When roofing workers began work, they discovered many unique features. For example, the concrete roof deck also is the ceiling, and some lighting fixtures were installed directly under the roof membrane. In addition, no flashings or interior drains were incorporated into the building. Robinson says Wright left out some roof system details that would be used now, such as flashings, so water on the roof systems could mimic the building's main design, which allows water to roll over the cantilevers like a waterfall. Although all buildings must have watershedding abilities, Fallingwater's unique cantilever design requires more attention be paid to waterproofing and roofing requirements.

Roof system damage was evident by water marks in the guest bathroom—cork walls were stained and concrete was spalling. In other areas, Robinson says the concrete was damaged; rebar was visible; some ceilings were cracked; and roofing materials were damaged.

"Nothing I removed from terraces and roof systems was dry," Robinson adds.

Because Fallingwater is a historic site, architectural and landscaping features could not be damaged and improvements had to match the original design.

"Historically, I didn't want to change anything," Robinson says. "But my job is to make the building last."

Waterproofing the building was a major aspect of making the building last. But Robinson had to make sure the building's appearance did not change. To do this, gravel-embedded materials that resemble BUR materials were applied over the completed roof systems and architectural details were returned to their original positions.

Robinson wasn't the only one paying attention to details. The roofing crew was watched by visitors. J.L. Robinson built platforms so tour guides could approach roofing workers to ask questions on behalf of visitors.

"It is strange to do work when you are being watched closely," Robinson notes. "We had engineers, architects and many foreign tourists asking questions." 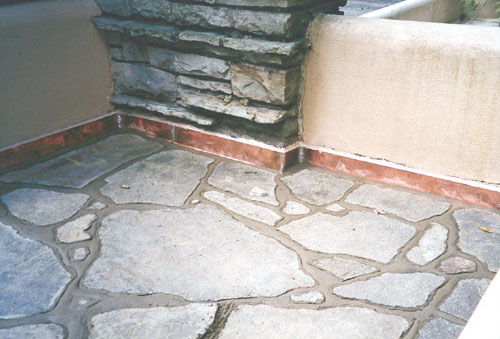 When replacement work was finished, each stone was put in its original position. 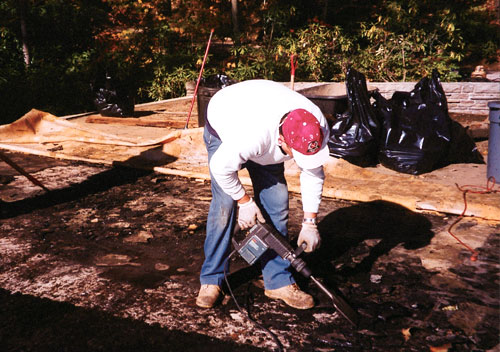 Roofing workers used chipping hammers to remove debris down to the concrete deck. 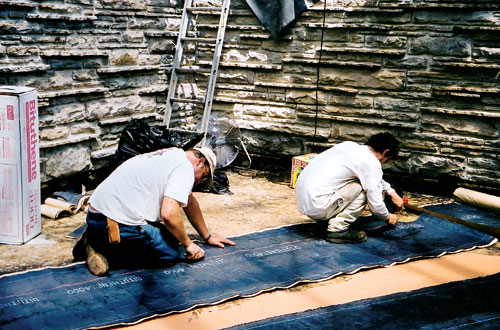 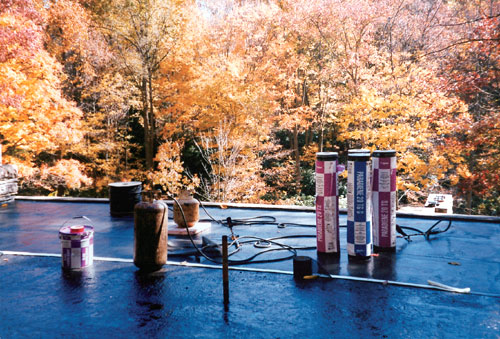 Robinson adds: "It took me about one month to convince the architect to use fiberglass insulation. The architect wanted to use organic materials, but I knew such materials would not last in a wet environment."

Other features added to roof systems and terraces to improve watershedding abilities include a 1/4-inch (6-mm) drainage mat and waterproofing materials that extend over part of the building's architectural rolls.

Robinson says because the building is in the woods, renovation and maintenance always will occur at Fallingwater. Maintenance workers will have to remove leaves and debris that constantly accumulate on the roof systems and terraces and clog drains. In addition, workers will have to perform inspections because of the inclement weather that is common in Mill Run. Robinson says from late fall to summer, the environment constantly is wet.

In 1955, Wright told the Taliesin Fellowship, a communal organization dedicated to organic architecture: "Fallingwater is a great blessing—one of the great blessings to be experienced here on earth. I think nothing yet ever equaled the coordination and sympathetic expression of the great principle of repose where forest, stream, rock and all the elements of structure are combined so quietly that really you listen not to any noise whatsoever though the music of the stream is there. But you listen to Fallingwater the way you listen to the quiet of the country."

Wright is one of the most recognized U.S. architects. He reformed the way people think about the relationship between space and nature and gave the country some of its most breathtaking structures.

Robinson admits he has enjoyed the media attention he has received from working on a Wright project, but when talking about the project, Robinson spoke like a roofing contractor who was just doing his job. 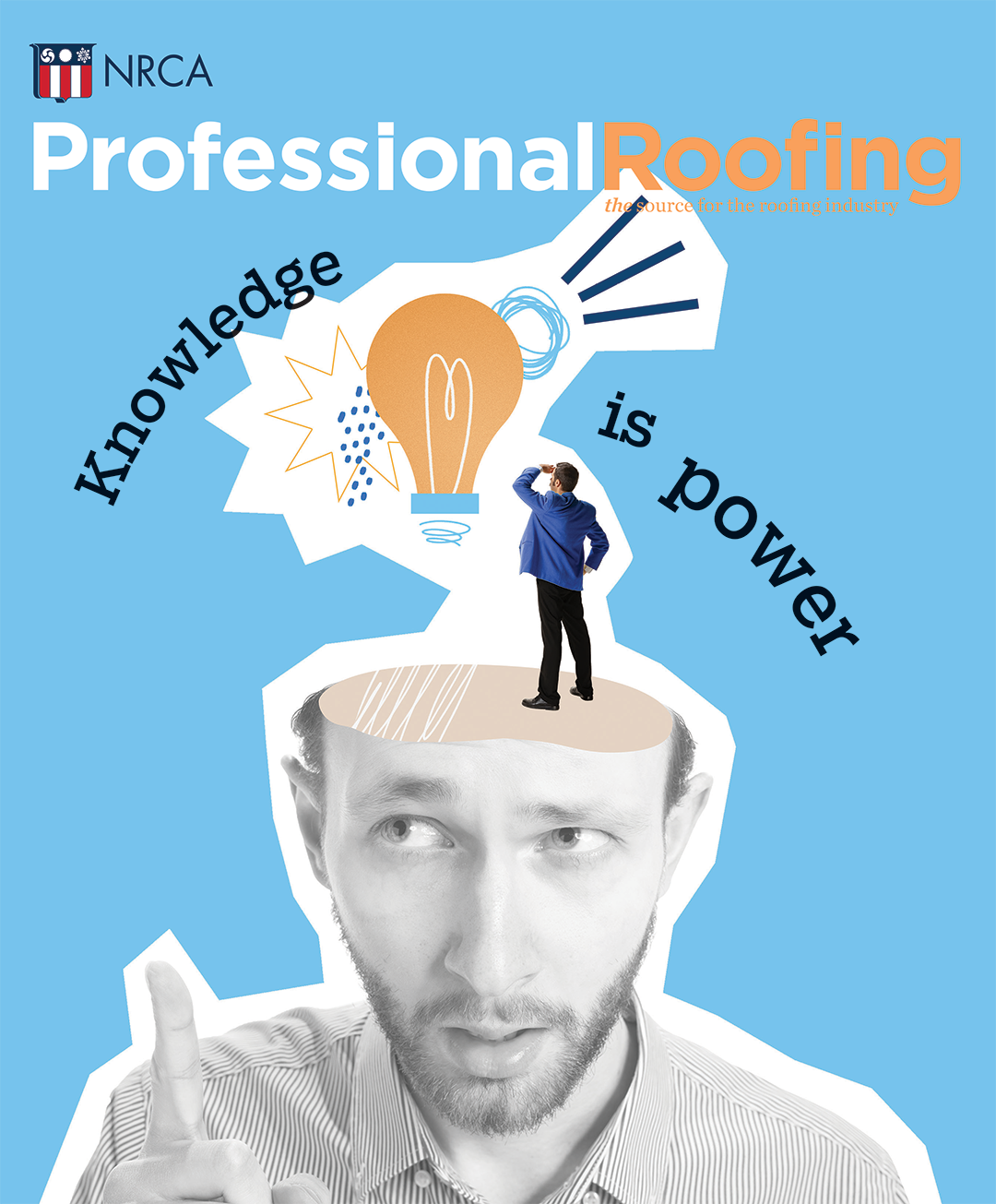