Gov. Rick Scott (R-Fla.) signed a bill June 15 that states Florida construction companies no longer have to enter into project labor agreements requiring them to pay union wages and benefits to compete for public construction projects.

The new law took effect July 1, making Florida the 24th state to limit state and local governments' use of mandatory project labor agreements for public construction works. Project labor agreements are pre-hire collective bargaining agreements with one or more labor organizations that establish terms and conditions of employment for certain construction projects. The Florida law applies to local projects in which a majority of funding comes from the state.

Iowa, Missouri and Wisconsin also have limited or barred the use of mandatory project labor agreements this year.

In addition, Rep. Dennis Ross (R-Fla.) introduced a bill in Congress in March that would curb the use of project labor agreements for federally funded construction projects. Although the bill has 48 co-sponsors, it has not moved since being introduced.

Under the Department of Labor's (DOL's) current system, apprenticeships receive funding after they meet quality standards. For more than 75 years, DOL has worked with state agency affiliates to register programs that meet quality training standards and lead to certificates of completion. Apprenticeships generally combine technical instruction with on-the-job learning for four years.

President Trump's Executive Order is intended to improve industry flexibility and expand the earn-as-you-learn job-training program by allowing companies to tailor the guidelines to meet their own workforce needs.

The Executive Order directs the secretary of labor to propose a new regulation that promotes the ability of third parties such as trade associations, companies and unions to develop their own apprenticeship guidelines. DOL still would give final approval to apprenticeships, but the department would be required to expedite the process to approve or disapprove the proposals. The Executive Order also retains the existing mechanism for DOL registration.

Former President Obama supported the cause during his tenure, announcing $175 million in apprenticeship grants to benefit 34,000 Americans in summer 2016. But deciding how to further elevate employer participation levels remains subject to debate.

President Trump's Executive Order received support from business groups hoping to advance job applicants' skills without needing to overcome the bureaucratic challenges of meeting federal and state-administered registration standards. The Executive Order faced criticism from some Democrats and Obama administration DOL officials who argue the order cedes too much control to companies without the traditional degree of government oversight.

In addition to the Executive Order, the Trump administration has dedicated $100 million in new funding to increase the number of apprenticeships. The White House also called upon Congress to look for additional financing options.

The Occupational Safety and Health Administration (OSHA) has proposed a delay in the electronic reporting compliance date of the Improve Tracking of Workplace Injuries and Illnesses rule from July 1, 2017, to Dec. 1, 2017. The proposed delay will allow OSHA to further review and consider the rule.

The agency published the final rule May 12, 2016, and has determined a further delay of the compliance date is appropriate for the purpose of reviewing questions of law and policy. The delay also allows OSHA to provide employers the same four-month window for submitting data that the original rule would have provided.

Legislation passed in the House June 20 would restrict states' ability to tax nonresidents, preventing them from taking income tax from people who work fewer than 30 days in the state. The Mobile Workforce State Income Tax Simplification Act (H.R. 1393) aims to simplify the existing national patchwork of interlocking obligations for employers and workers who operate over state lines.

The proposed legislation has been criticized by some state representatives who say it's an example of federal overreach that would cost their states tens of millions of dollars in revenue annually. States with job centers located near their borders would lose revenue, according to the Congressional Budget Office (CBO), while states with large populations of workers who commute out of state likely would gain revenue. Overall, the bill would reduce the amount nonresident workers would pay in taxes; the CBO projects the bill would cost states a combined $78 million in 2020. 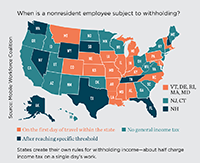 States create their own rules for withholding income—about half charge income tax on a single day's work.

Under the bill, employers would not have to withhold income tax from nonresidents if they work in the state for fewer than 30 days; this is known as a de minimis exemption. States currently create their own rules for withholding income. Tax attorneys told Bloomberg BNA states' different laws mean their clients, including construction workers who receive short-term work assignments, must file multiple tax returns and deal with numerous laws in up to a dozen states. Companies that complete work in multiple states often experience a similar problem.

Many lawmakers agree a de minimis threshold is necessary, but representatives in states that stood to lose revenue as a result of the bill sharply disagreed regarding the required number of days. Before the bill was introduced, some representatives wanted to place the threshold at 14 days and exempt employees who earn more than $130,000 annually.

Companies likely will have more time to comply with the Occupational Safety and Health Administration's (OSHA's) construction crane rule. On June 20, an OSHA advisory committee voted to approve a recommendation to delay enforcement of the standard's certification mandate for one year to Nov. 10, 2018.

OSHA issued a crane safety regulation in 2010 containing certification requirements for operators but delayed implementation amid problems identified by companies, including how much testing should be required for operator certification and whether operators should be certified according to a crane's lifting capacity. The delay would not affect regulations requiring employers to determine if crane operators are trained and competent.

Some construction companies have argued crane operators should be certified only by the type of crane regardless of a crane's capacity. In response to the advisory committee's approval of the delay, several crane industry members cautioned the agency to respect its previous recommendations for the regulatory text and to make only the minimum amount of changes necessary to correct the regulation's earlier version.

A recently introduced Senate bill aims to use tax breaks to kickstart apprenticeship programs. On June 14, Sens. Maria Cantwell (D-Wash.) and Susan Collins (R-Maine) introduced the Apprenticeship and Jobs Training Act (S. 1352). The bill would create a $5,000 tax credit based on wages paid by companies that hire individuals enrolled in a federal or state-registered apprentice program.

Cantwell told Bloomberg BNA the bill is intended to kick "American apprenticeship into high gear" by establishing "the first ever national incentive for apprentice programs."

"It will help close our skills gap, get more Americans back to work, raise wages and allow our companies to continue to make the best products in the world," Cantwell continued.

The bill would provide a tax credit rate of $3 per hour per individual for employers participating in a multiemployer apprenticeship program. Senior employees near retirement would be given the ability to draw from their pensions earlier if they choose to mentor new employees, according to the legislation.